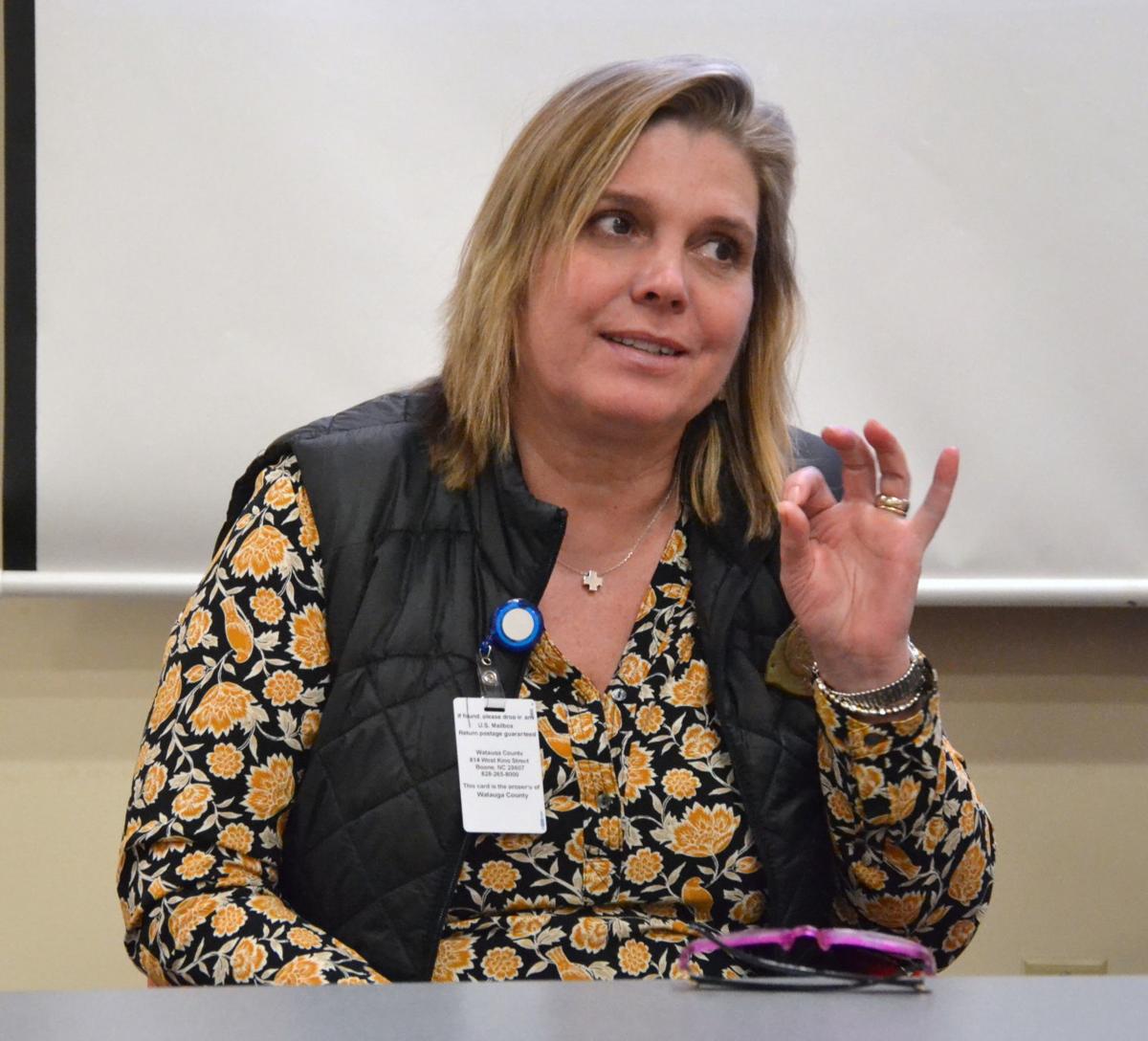 Claudia Gross, an outpatient clinician at Daymark Recovery Services, speaks during a panel discussion on March 2. 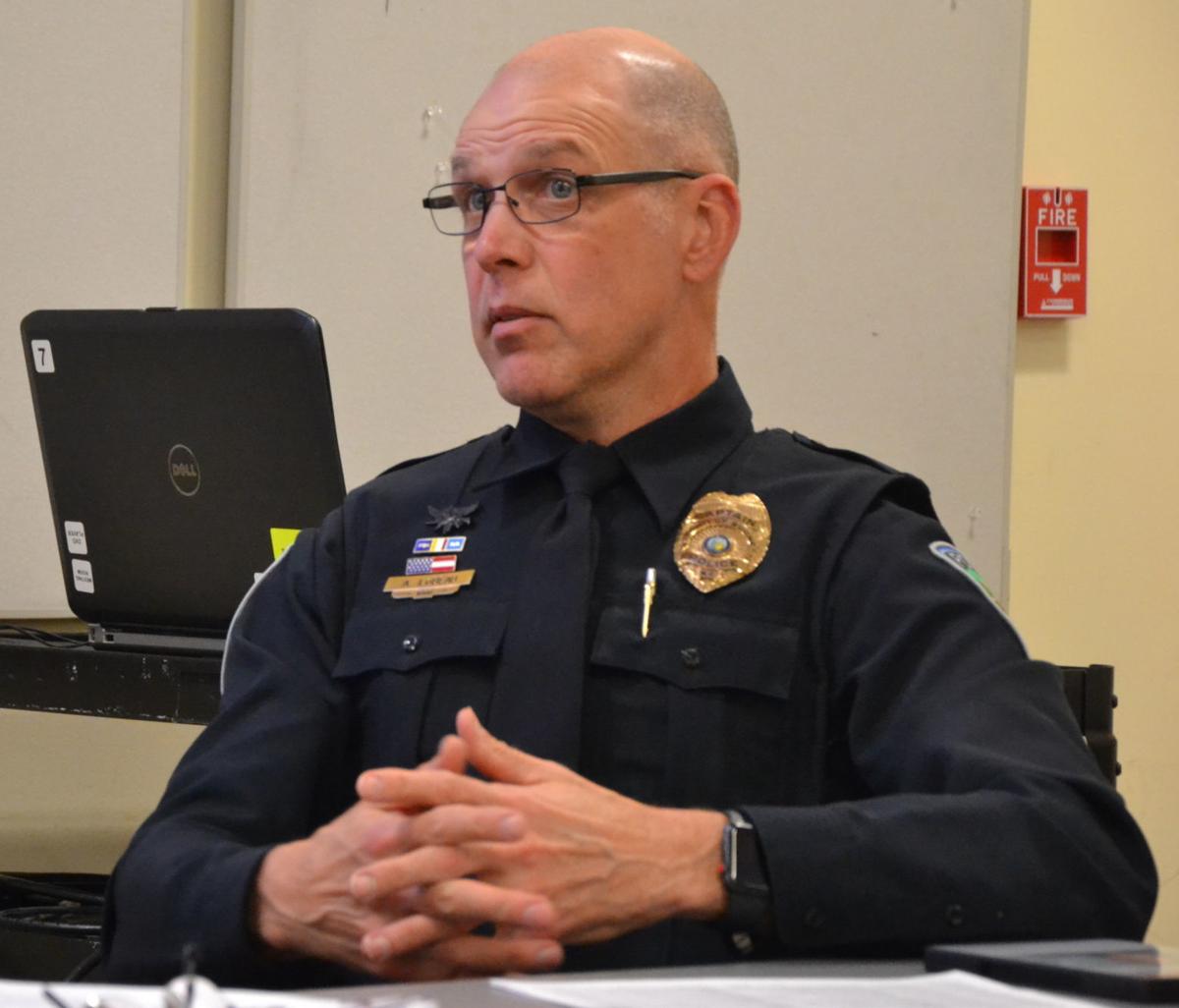 Claudia Gross, an outpatient clinician at Daymark Recovery Services, speaks during a panel discussion on March 2.

Melanie Childers, the director of pastoral care for Appalachian Regional Healthcare System and board member of NAMI High County, served as the moderator for the event. Childers referenced a Dec. 8, 2019, incident in Lincolnton when a mother took her 16-year-old son to a hospital for a mental health emergency. According to WBTV, the mother of the boy asked for security assistance, and the boy was reportedly forced to the ground by hospital security guards and struck by a Lincoln County sheriff’s deputy in the process.

Childers asked the panelists to speak on how prepared local officers and health care professionals were to lessen the chances of that type of situation occurring in Watauga.

Hawkinson said he’s been involved in crisis intervention teams training with both the Boone Police Department and the Watauga County Sheriff’s Office. He said the CIT training is an intensive 40-hour program that aims to provide officers a meaningful awareness of various types of mental illness and how to respond without escalating the situation.

“People really have a chance to gain a much more empathic awareness of the kind of situations that are involved and not just to fall back on law enforcement training, which doesn’t really address that very well,” Hawkinson said.

The Boone Police Department requires each of its officers to undergo the training and it is often an “eye opener” for them, Le Beau said. He added that traditionally law enforcement’s tool is to arrest people, and that sometimes lines get blurry when a mentally ill person commits a crime.

For example, Le Beau said someone who is intent on doing a criminal act, like robbing a store, might resist arrest because they want to escape, which would be different than a mentally ill person who might be resisting arrest for other reasons.

“There’s a lot of unfortunate incidents around the country where an inappropriate amount of force was used on people with mental illnesses,” Le Beau said. “We are committed to make sure that that type of mistreatment is minimized here in our county.”

Murray added that the mental health services and law enforcement collaborations formed through the CIT trainings and other programs have greatly improved in recent years.

“We have a better understanding of the limitations we all face,” Hawkinson said.

Gross — who serves part time as a mobile crisis clinician— explained the typical procedure if a call were made to the Daymark crisis line. The call would be dispatched to an on-call clinician who would start to assess the situation over the phone, who may then offer a face-to-face visit if warranted.

Depending on the issue of what is perceived as a crisis by the caller, Gross said crisis clinicians may call officers as backup as a result of the degree of out-of-control or dangerous behaviors.

Gross said the crisis responder would then meet with the person or family member who called and ask questions and start to assess the situation — such as is the person safe, what immediate dangers are present, what is triggering the crisis event and are there ways the person can help themselves to allow for self-empowerment? The crisis responder may make suggestions on a course of action, which sometimes can include going to the hospital.

If a call were made to 911, Le Beau said an officer would be dispatched to the scene and would assess the situation upon arrival. He said sometimes it’s appropriate for the officer to authorize the transport of the person in crisis to the hospital and do an involuntary commitment — but this is a last resort.

Boone Police prefers to request assistance from a mobile crisis unit that would then assess what that person may need to “keep that person out of a hospital bed unless it’s necessary to do so,” Le Beau said. Hawkinson said that mobile crisis is a service provided by Daymark and funded by Vaya Health — available to anyone in the community and not just for Daymark clients.

An audience member asked if there was CIT training for the public, and Morrison suggested that community members could take a mental health first aid course. The course would allow the participant to feel confident when dealing with folks in different distress as well as equip them with knowledge of how to help someone who is having thoughts of suicide. Morrison also suggested people read the NAMI crisis guide, which can be found at www.nami.org/About-NAMI/Publications-Reports/Guides.

For more information about Daymark, visit www.daymarkrecovery.org. Its 24-Hour Crisis Hotline can be reached at (866) 275-9552. To contact the mobile crisis unit, Gross said people call (828) 264-HELP.