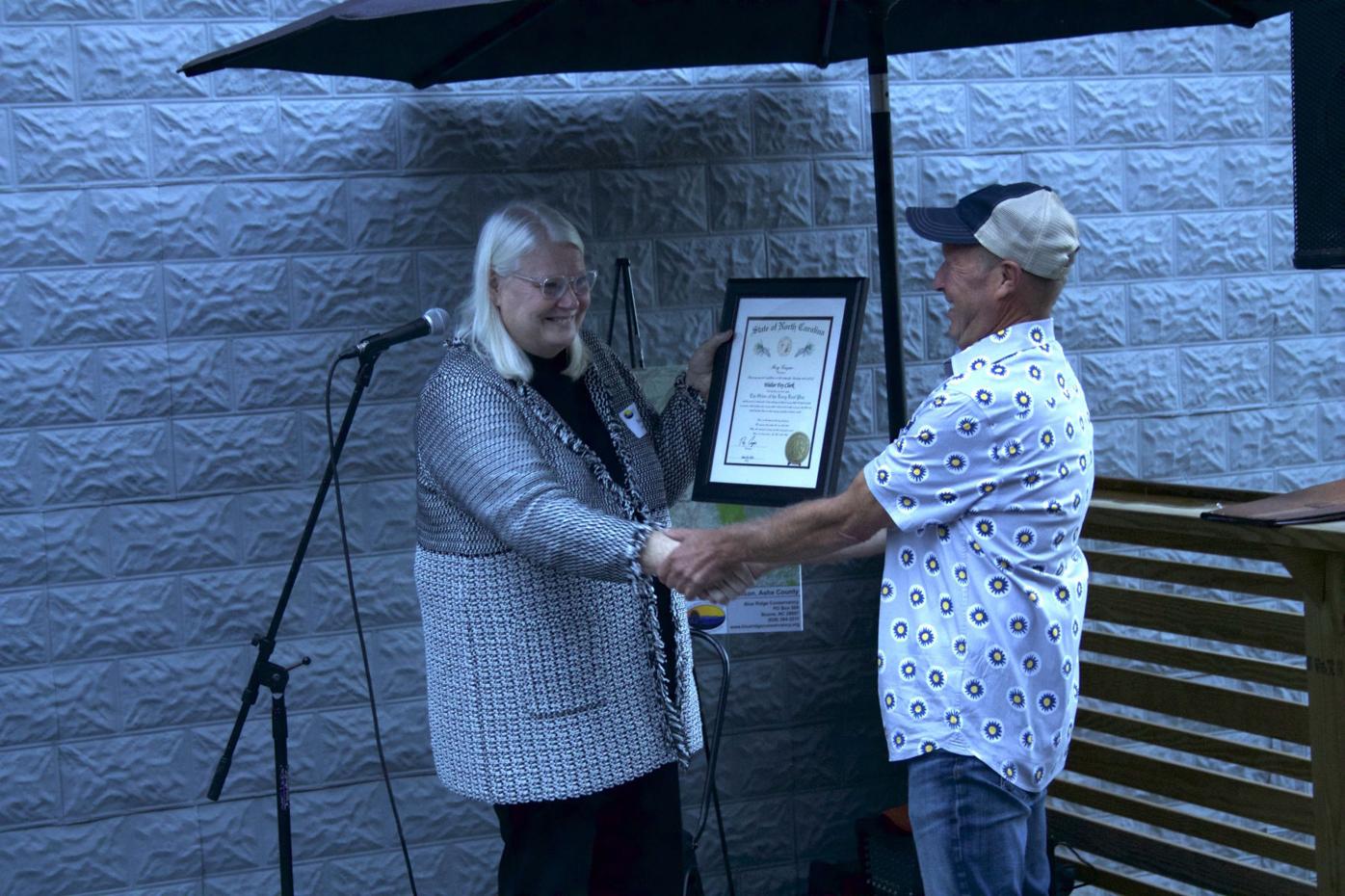 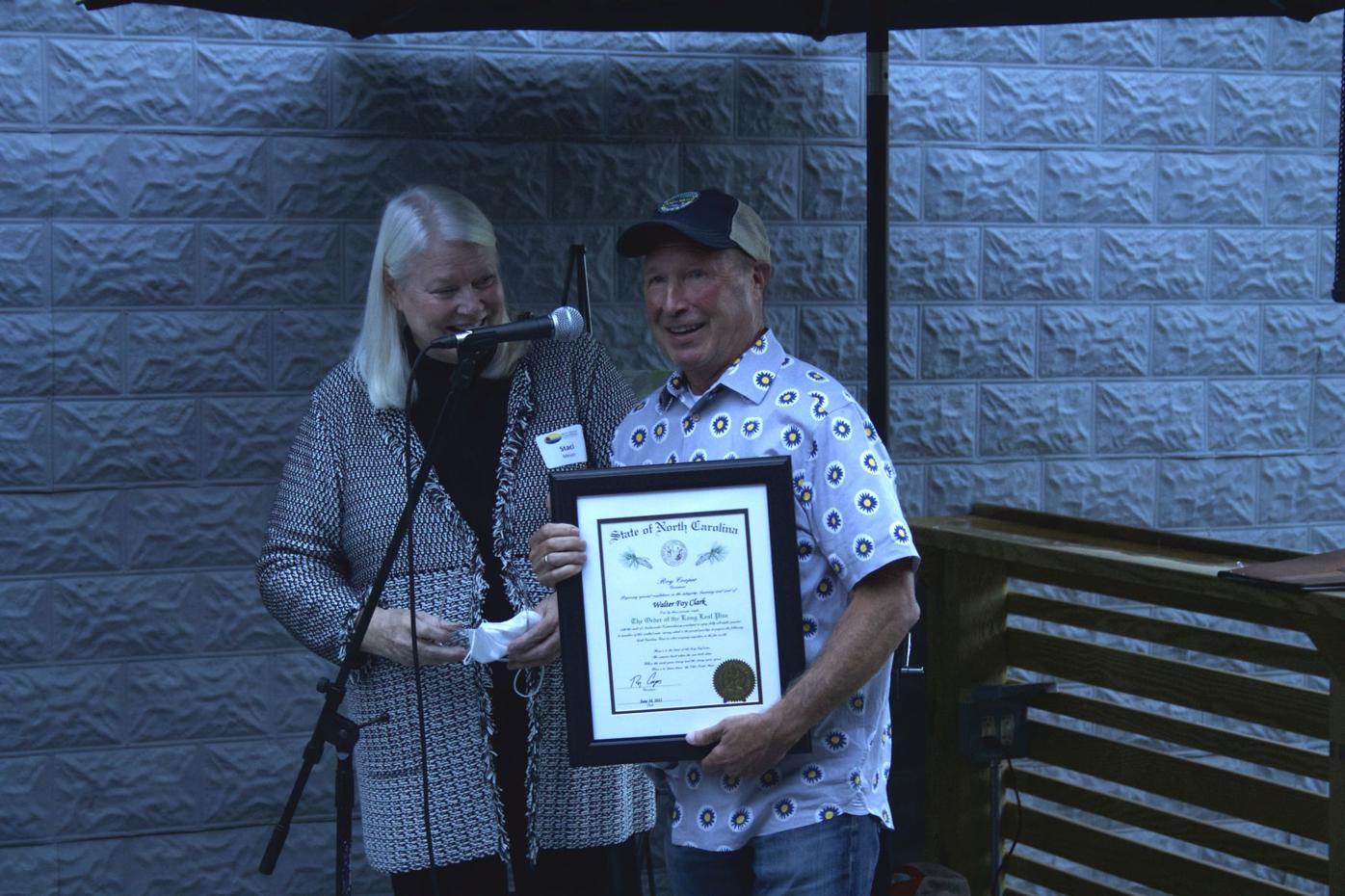 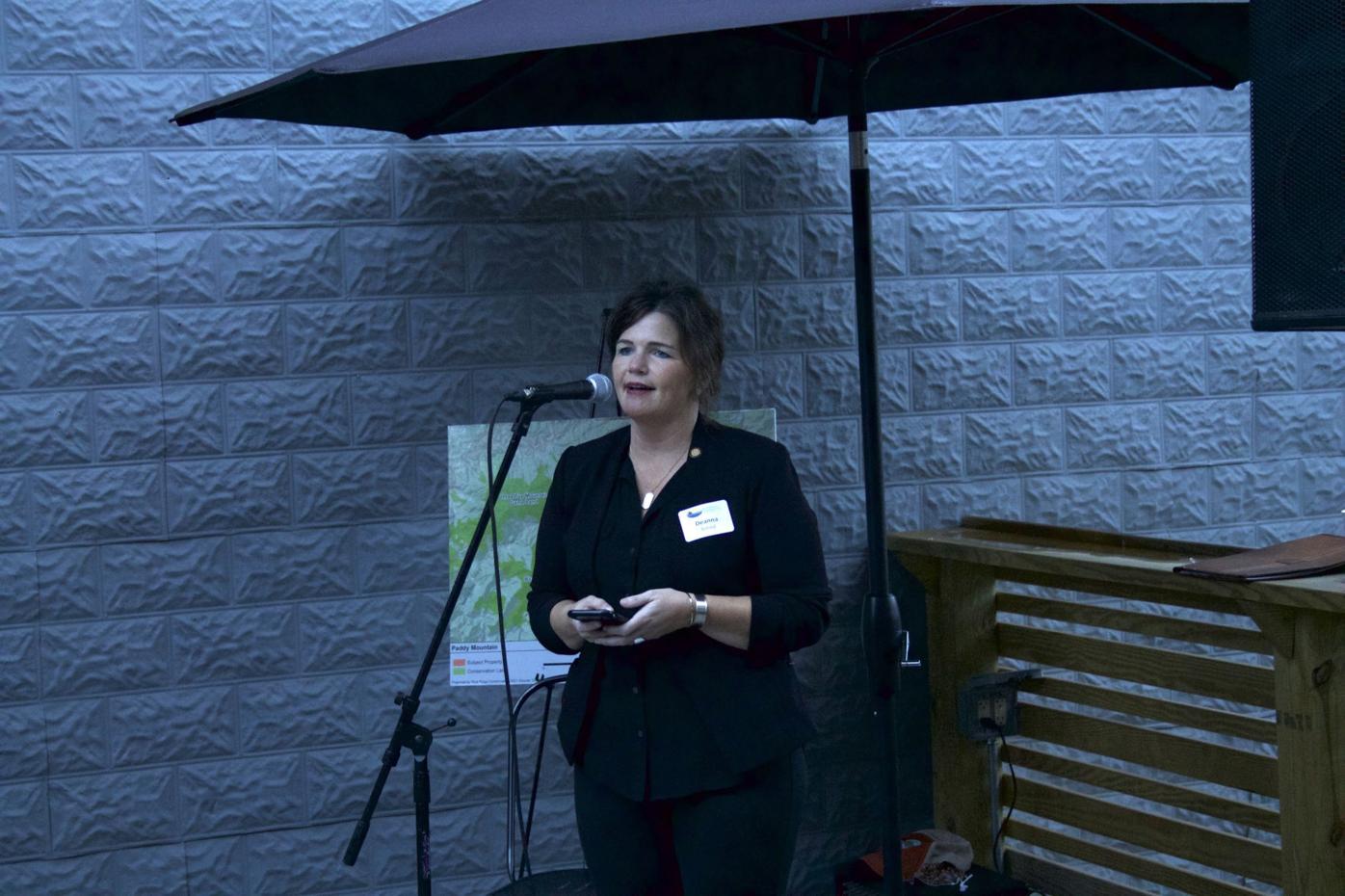 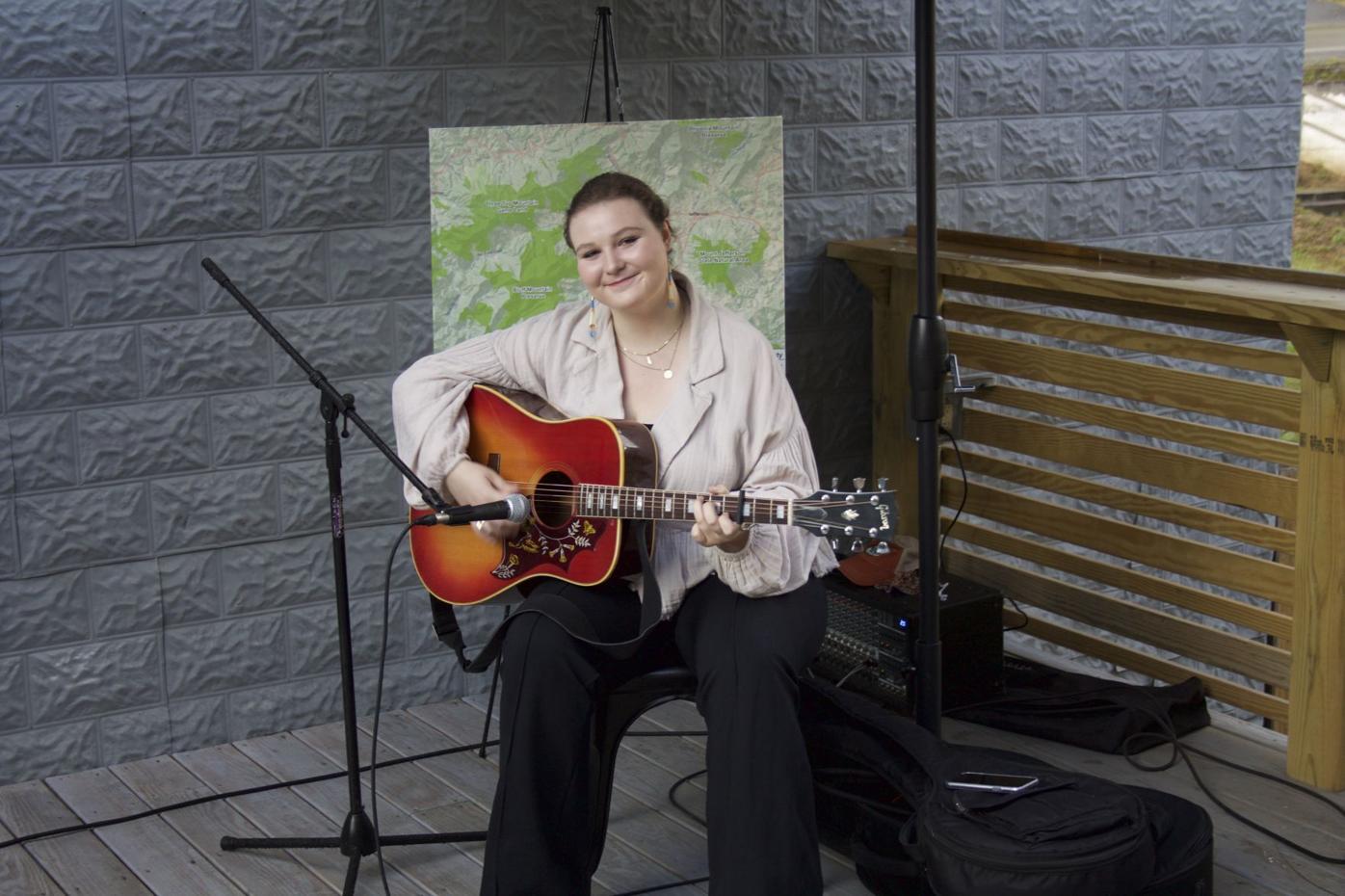 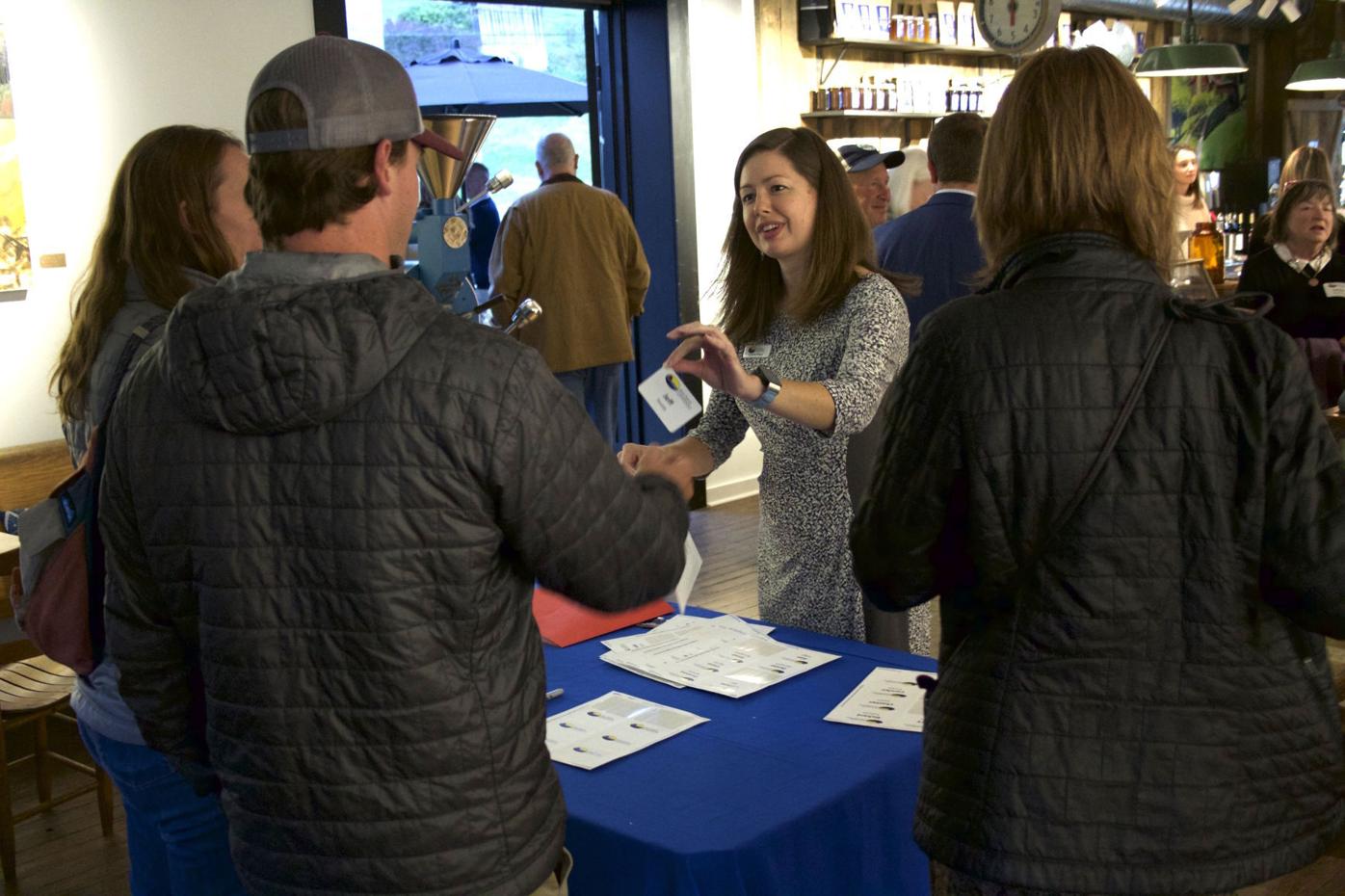 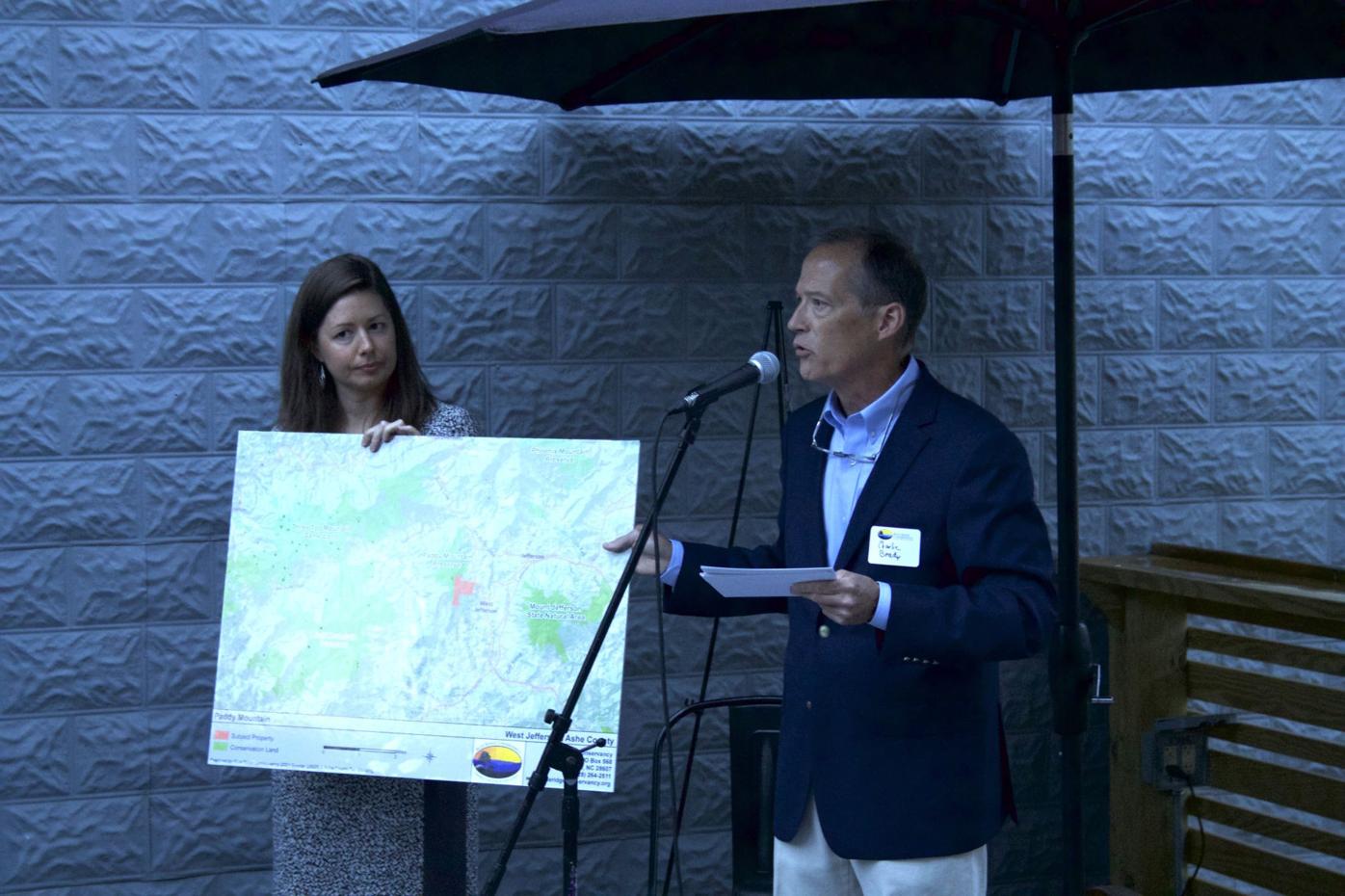 Executive Director the Blue Ridge Conservancy, Charlie Brady, announces to the crowd that West Jefferson’s Paddy Mountain has been preserved. 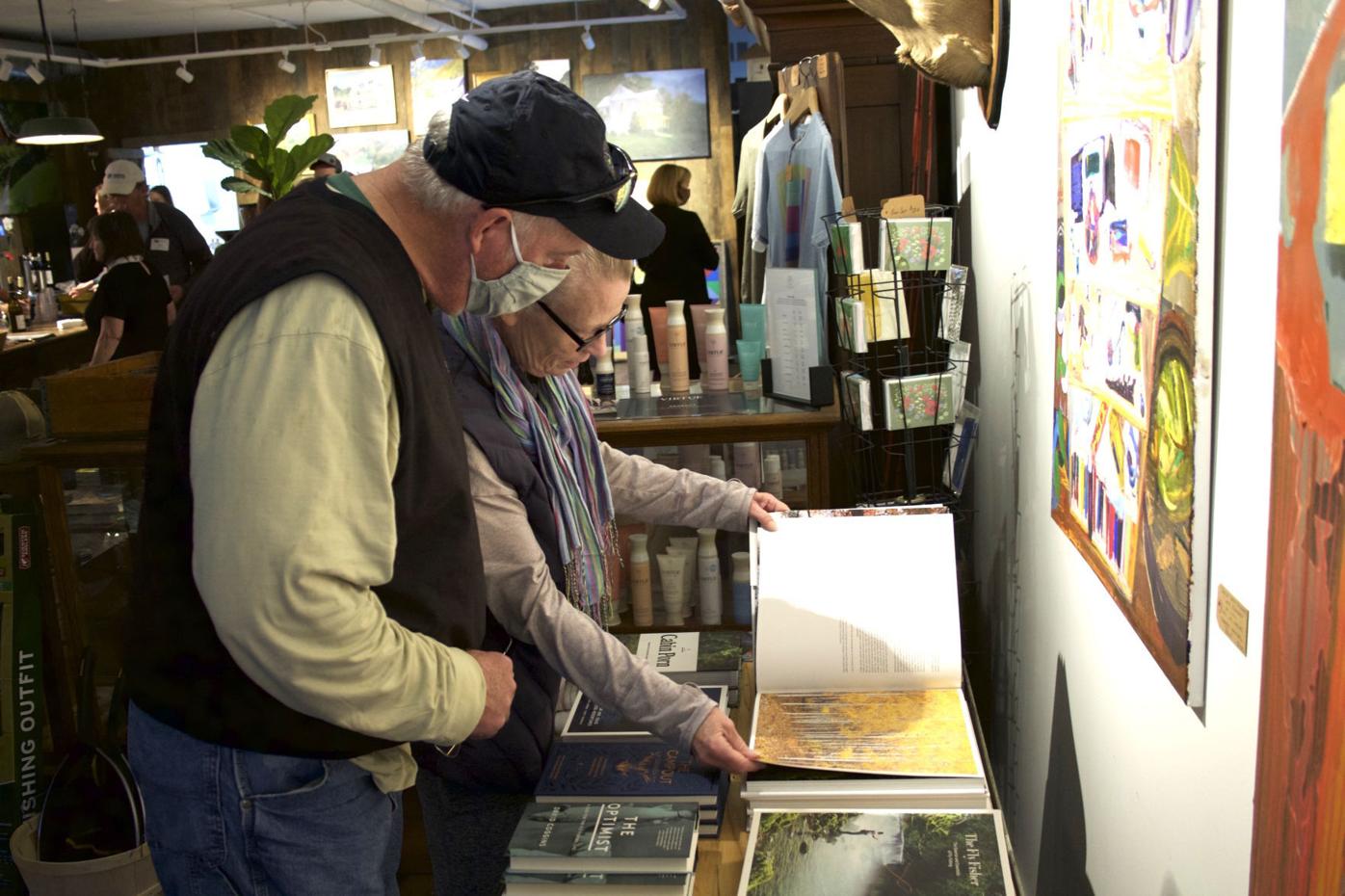 The Butlers peruse the books at the Old Orchard Creek General Store prior to the Blue Ridge Conservancy event on Oct. 21. 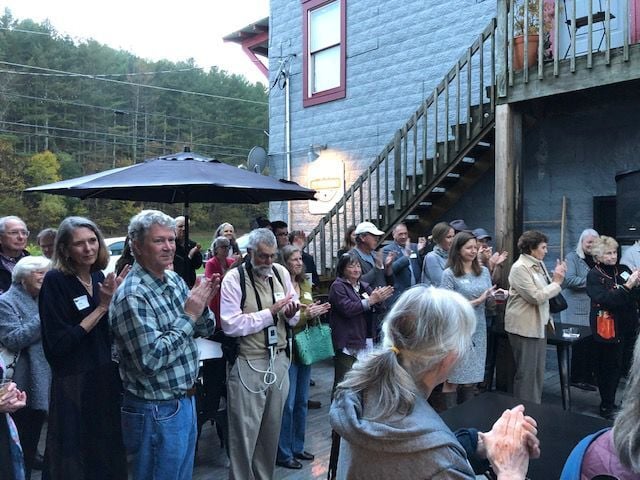 The crowd applauded following the news that Paddy Mountain has been preserved by the Blue Ridge Conservancy.

The Butlers peruse the books at the Old Orchard Creek General Store prior to the Blue Ridge Conservancy event on Oct. 21.

The crowd applauded following the news that Paddy Mountain has been preserved by the Blue Ridge Conservancy.

LANSING — Ashe County resident Walter Clark has devoted much of his life to preserving many of North Carolina’s natural treasures. Now, Clark’s many contributions to the state have officially been recognized, when on the evening of Oct. 21 he was surprised with one of North Carolina’s most prestigious awards — The Order of the Long Leaf Pine.

The ceremony took place as part of a Blue Ridge Conservancy event held at The Old Orchard Creek General Store, which is owned by both Clark and Johnny Burleson.

Also in attendance was the Chief Deputy Secretary of the NC Department of Natural and Cultural Resources, Staci Meyer, who made the trip to Lansing to present Clark the award on behalf of Gov. Roy Cooper.

Clark stated that he was both surprised and honored to have received one the state’s most treasured awards.

“It was a big surprise. I can’t believe they were able to keep it a secret,” Clark said. “It’s an honor to get this. The Order of the Long Leaf Pine is probably one of the most special awards you can get in North Carolina. So, what can I say, I’m privileged.”

Through the years, Clark has worked for NCDCR where he served as the Director of the Land and Water Fund, and has also served as Executive Director of the Blue Ridge Conservancy where he worked tirelessly to preserve some of the High Country’s most iconic landscapes.

In the past Clark has played a key role in establishing the Pond Mountain Game Land, and assisted with the expansions of Grandfather Mountain and Elk Knob State Parks. Earlier this year, Clark was named Conservationist of the Year by the North Carolina Wildlife Federation.

Following the presentation the of The Order of the Long Leaf Pine, Charlie Brady, the executive director of the Blue Ridge Conservancy, took to the floor to announce that Paddy Mountain, the iconic peak that has long served as a backdrop for West Jefferson, had been preserved for the ages.

“After many years, about two weeks ago the Blue Ridge Conservancy — with the help of a lot of people in the community — were able to put Paddy Mountain, 153 acres, under contract to protect that land forever,” Brady said. “This is really a monumental accomplishment. We will close on the property approximately Dec. 10. So, at that point in time that beautiful mountain side that is completely wooded, with no homes, no buildings, will forever remain in that undisturbed way.”

Brady noted during his speech that acquiring the land on Paddy Mountain was a true community effort, with the conservancy receiving help from several sources including the town of West Jefferson, Ashe County government, Skyline-Skybest, Blue Ridge Energy Ashe County Chamber, Lifestore Bank and scores of private donors who have helped raise more than a million dollars for the project.

“It’s really an incredible story of community participation,” Brady said. “We’re working now will the county and the town, ultimately to transfer ownership so it will become public space, with public access and recreation space.”

Speaking on the protection of Paddy Mountain, Clark stated that he views Blue Ridge Conservancy’s most recent conservation victory as a win-win for everyone.

“The protection of Paddy Mountain is a game changer for West Jefferson and for Ashe County, if that mountain had been logged, or whatever, it would have been such a travesty for the town,” Clark said. “I truly believe that conservation is an economic driver for everybody, so the more that we can do the more it makes Ashe County a better place to live.”

Currently, the Blue Ridge Conservancy has protected 22,000 acres of land across the High Country. For more information about the conservancy’s work visit blueridgeconservancy.org/ or call (828) 264-2511.