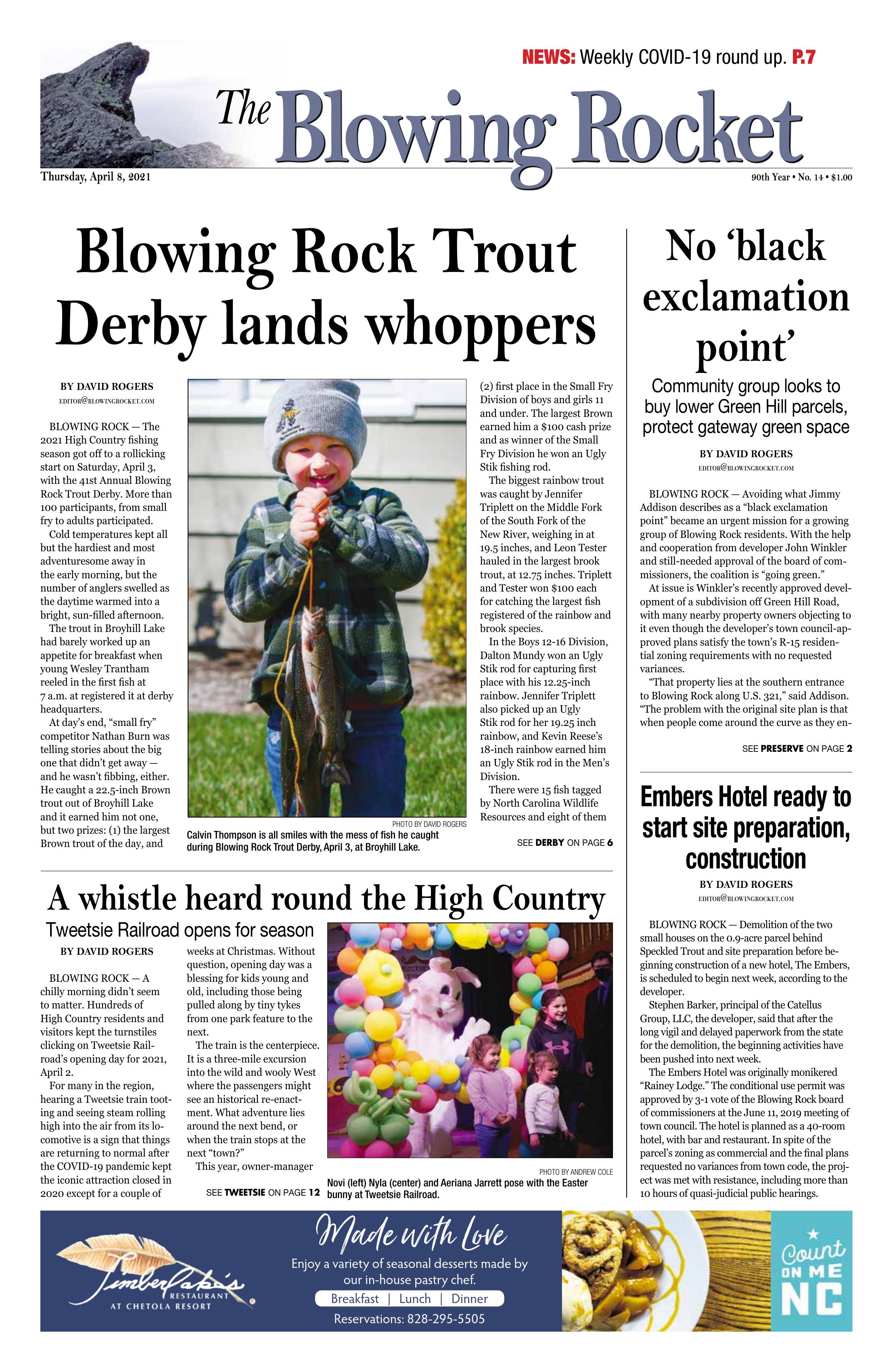 BLOWING ROCK — The 2021 High Country fishing season got off to a rollicking start on Saturday, April 3, with the 41st Annual Blowing Rock Trout Derby. More than 100 participants, from small fry to adults participated. 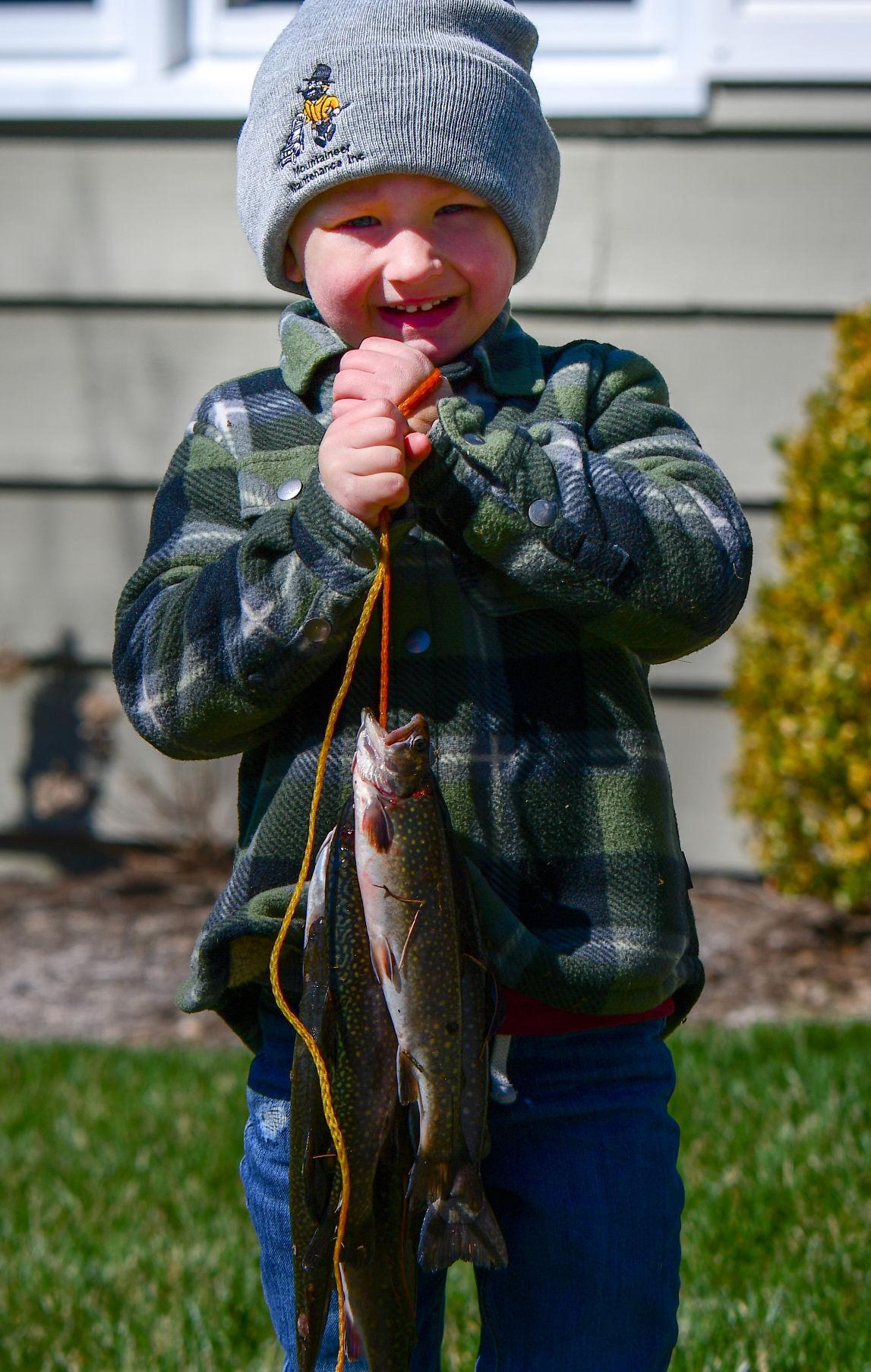 Calvin Thompson is all smiles with the mess of fish he caught during Blowing Rock Trout Derby, April 3, at Broyhill Lake.

Cold temperatures kept all but the hardiest and most adventuresome away in the early morning, but the number of anglers swelled as the daytime warmed into a bright, sun-filled afternoon.

The trout in Broyhill Lake had barely worked up an appetite for breakfast when young Wesley Trantham reeled in the first fish at 7 a.m. at registered it at derby headquarters. 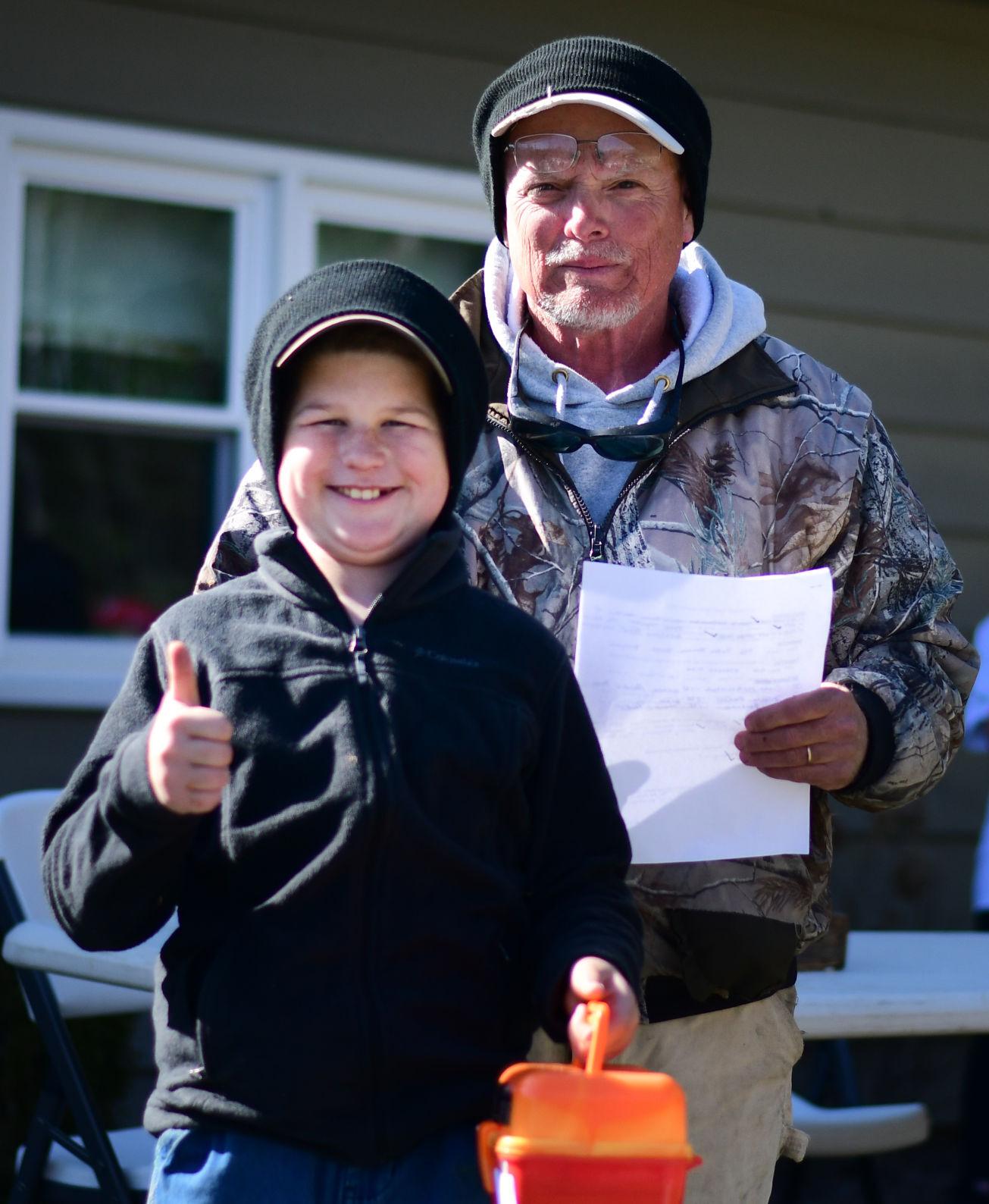 At day’s end, “small fry” competitor Nathan Burn was telling stories about the big one that didn’t get away — and he wasn’t fibbing, either. He caught a 22.5-inch Brown trout out of Broyhill Lake and it earned him not one, but two prizes: (1) the largest Brown trout of the day, and (2) first place in the Small Fry Division of boys and girls 11 and under. The largest Brown earned him a $100 cash prize and as winner of the Small Fry Division he won an Ugly Stik fishing rod.

The biggest rainbow trout was caught by Jennifer Triplett on the Middle Fork of the South Fork of the New River, weighing in at 19.5 inches, and Leon Tester hauled in the largest brook trout, at 12.75 inches. Triplett and Tester won $100 each for catching the largest fish registered of the rainbow and brook species.

Measuring fish when cash, trophies, and prizes are on the line is an important job for Blowing Rock Trout Derby. 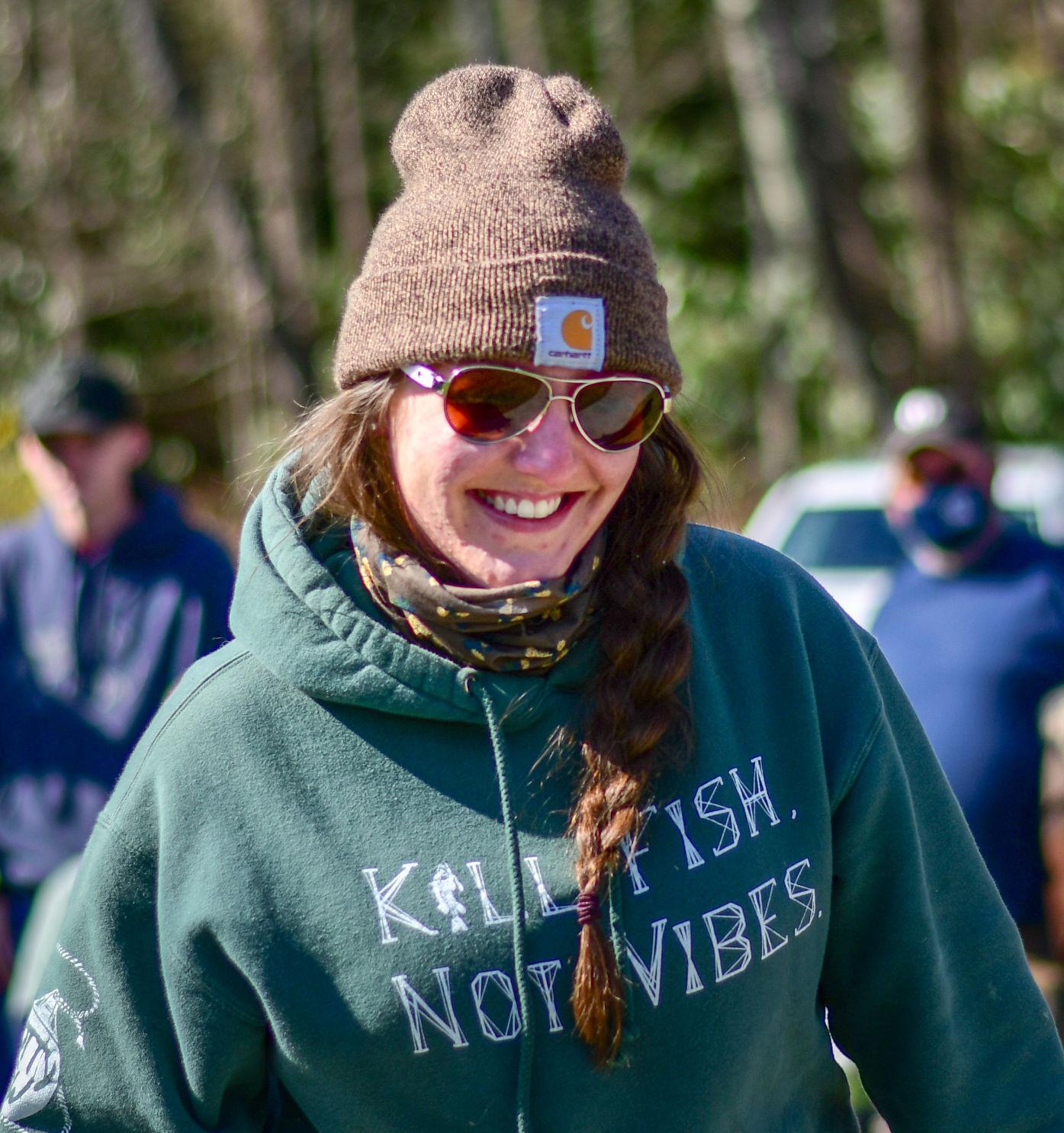 Jennifer Triplett was one of the winners at the 41st annual Blowing Rock Trout Derby on April 3.

There were 15 fish tagged by North Carolina Wildlife Resources and eight of them were caught during the Derby, in Broyhill Lake. Each earned the lucky angler catching them $25. 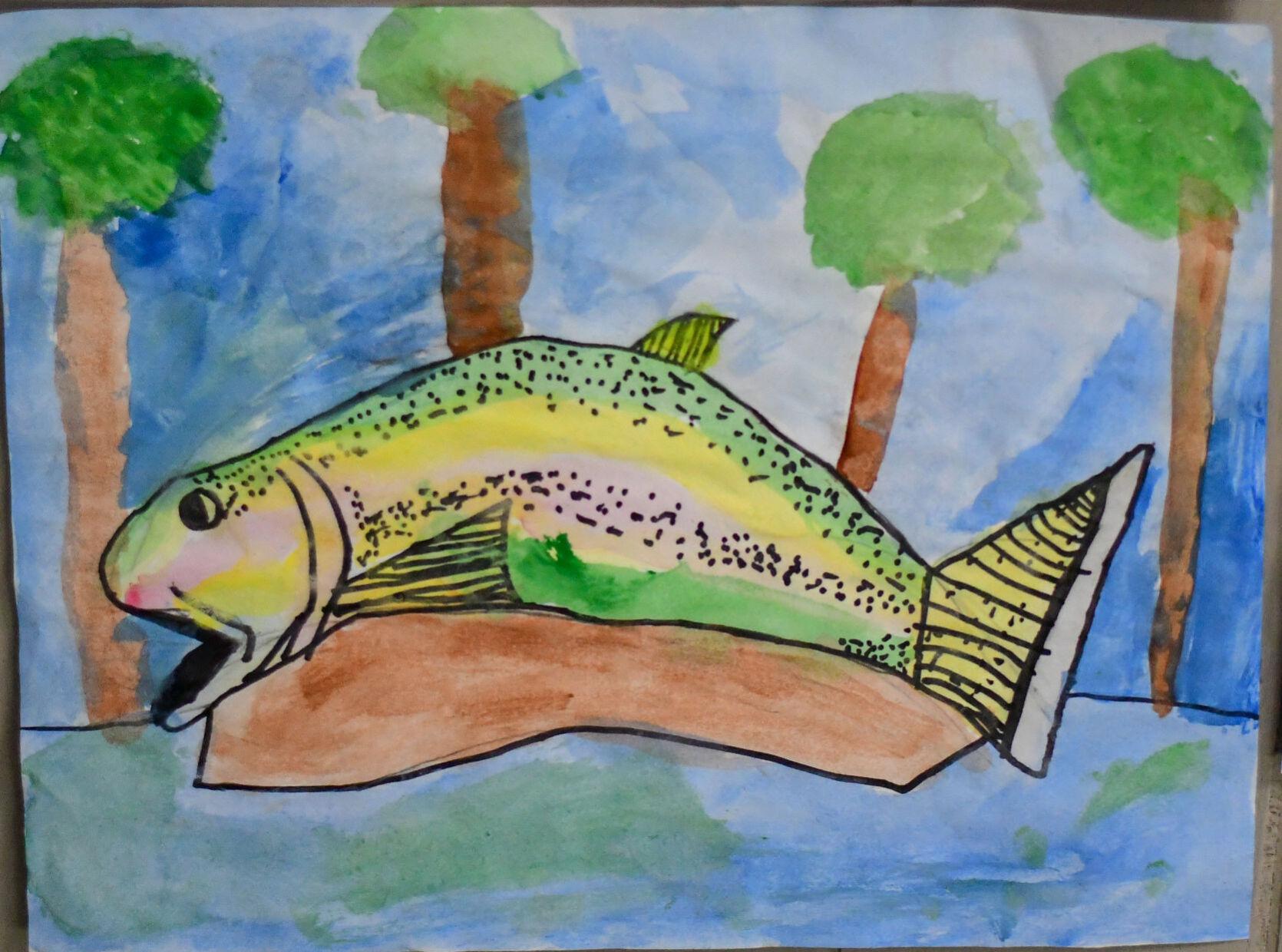 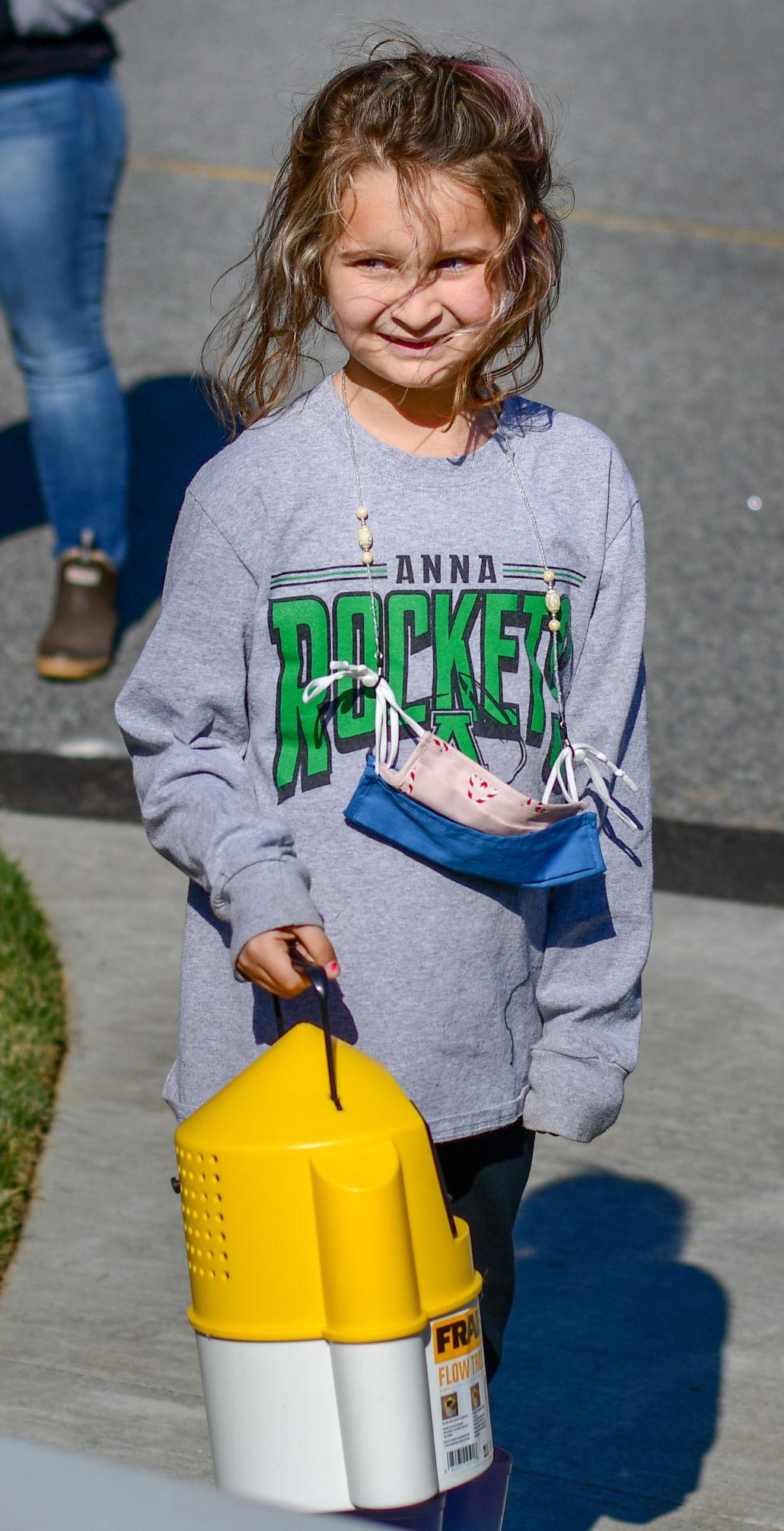 Engineer Matt Ernst leans out the window of Tweetsie Railroad’s historic steam locomotive as it makes its 3-mile journey through the Blue Ridge Mountains.

Lindsey Corder and her father, Preston, wrangle a horse at Tweetsie Railroad.

Emily Miller and her daughters, Lorelei and Vivienne, fly high in a chair lift on Tweetsie Railroad’s opening day.

Randle Kirby (left) and Dawson admire some of the crafts on display at Tweetsie Railroad.

Jax Hayward takes a spin on a motorcycle at Tweetsie Railroad’s amusement park.

Jason Myers (center), with Harrison and Anderson, enjoy one of the many rides available at the Tweetsie Railroad amusement park.

A 3-mile ride on Tweetsie Railroad’s historic steam locomotive is one of the many highlights visitors can experience at Wild West-themed amusement park outside Blowing Rock. 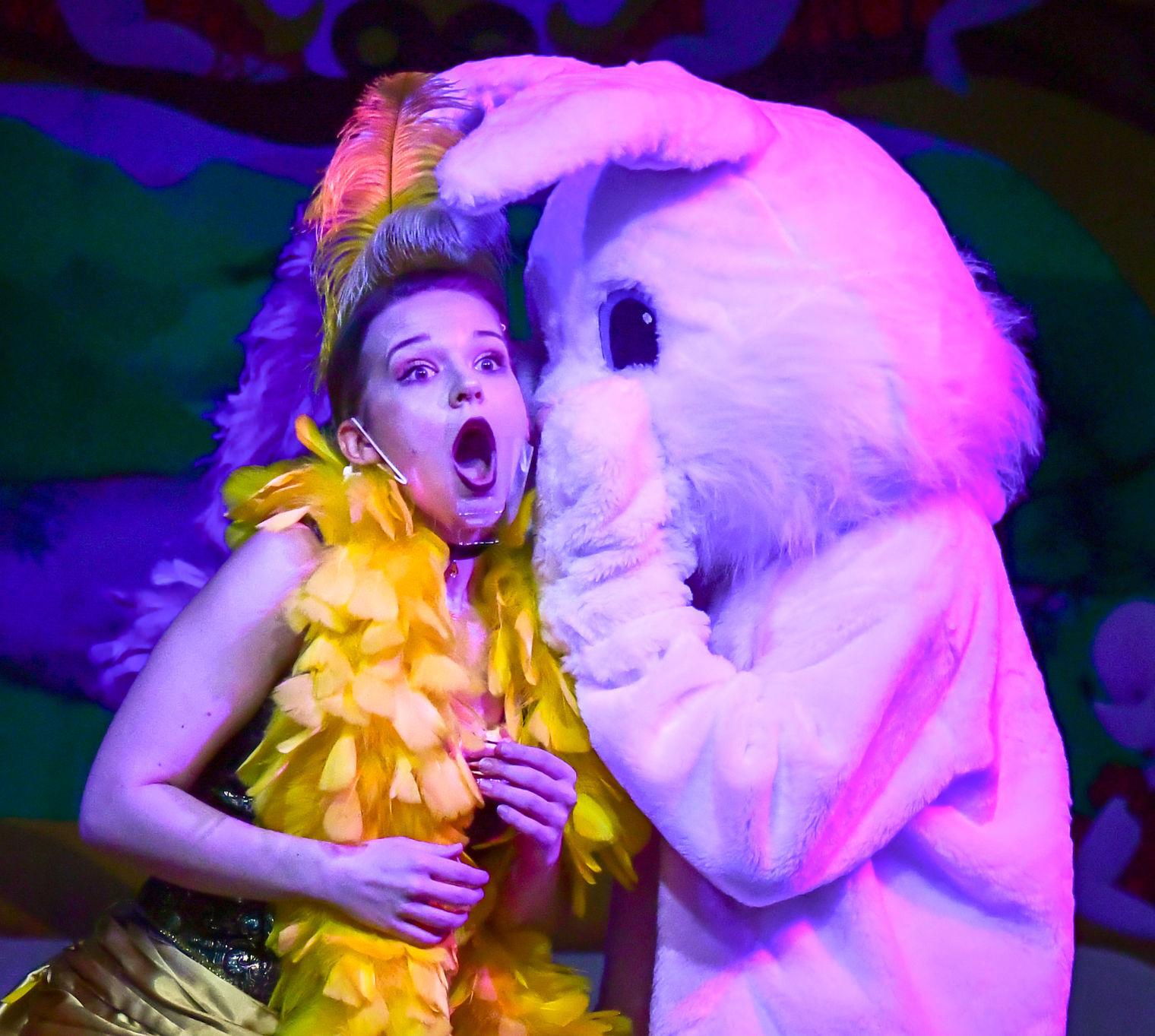 The Easter Bunny showed up on Tweetsie Railroad’s Palace stage on opening day, April 2, and had secrets to tell.

For many in the region, hearing a Tweetsie train tooting and seeing steam rolling high into the air from its locomotive is a sign that things are returning to normal after the COVID-19 pandemic kept the iconic attraction closed in 2020 except for a couple of weeks at Christmas. Without question, opening day was a blessing for kids young and old, including those being pulled along by tiny tykes from one park feature to the next. 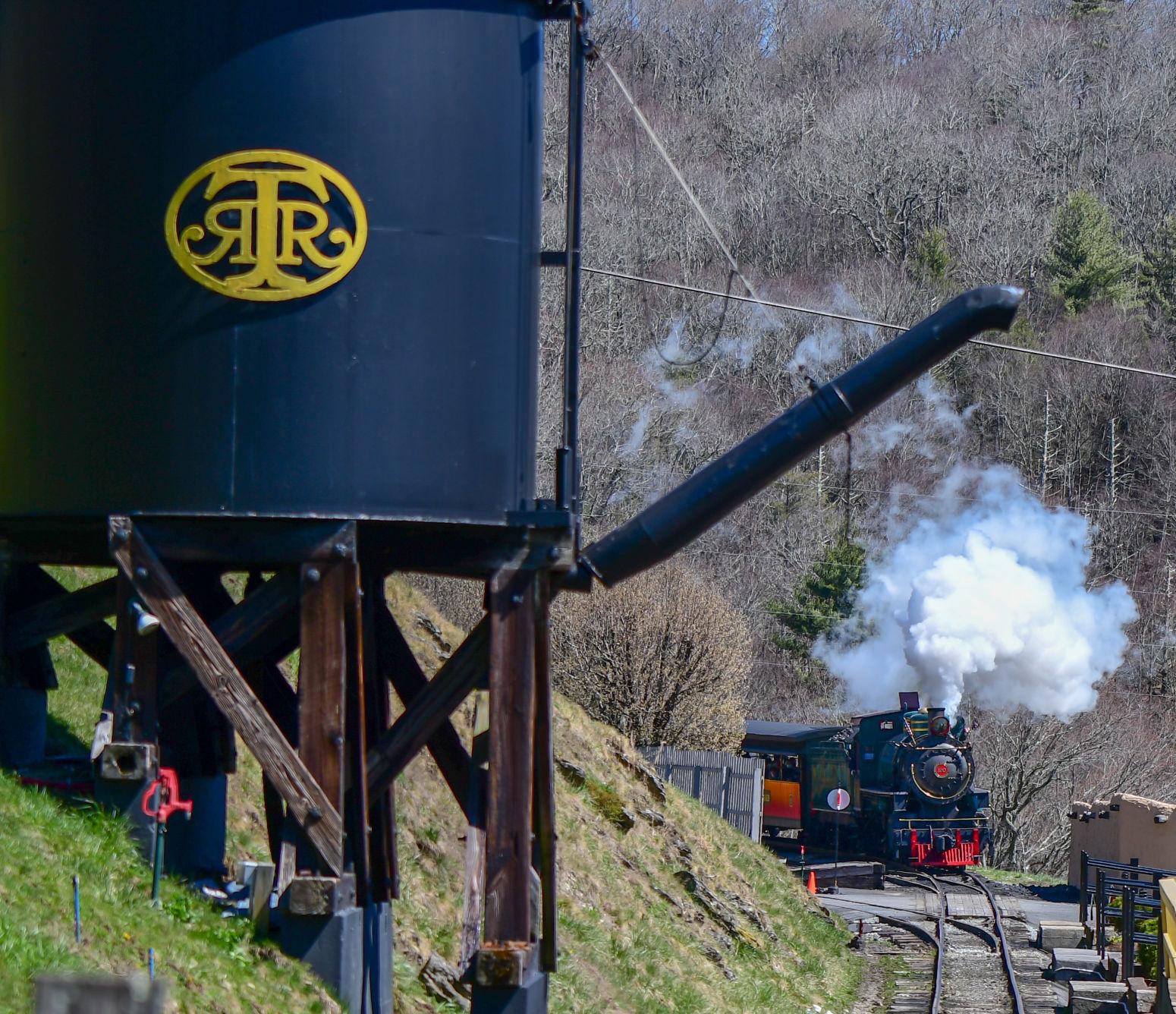 Tweetsie Railroad’s train comes into the station on April 2, right on time after a 3-mile loop around the park.

The train is the centerpiece. It is a three-mile excursion into the wild and wooly West where the passengers might see an historical re-enactment. What adventure lies around the next bend, or when the train stops at the next “town?”

This year, owner-manager Cathy Robbins said, “People have to make reservations to ride the train. That’s the best way we have to observe the social distancing protocols.” 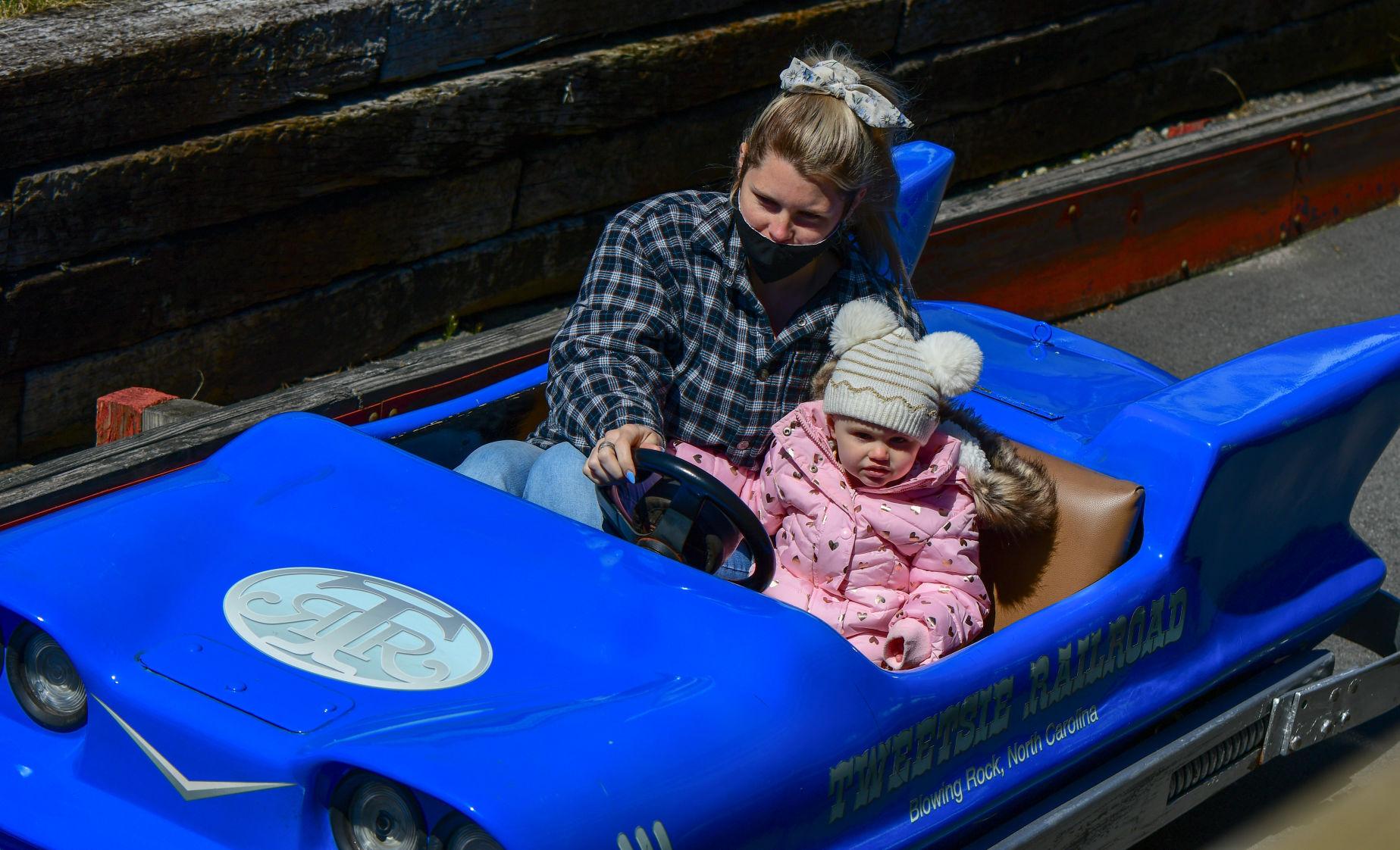 When not riding the train, there are plenty of other amusement park features to enjoy, from a ferris wheel with panoramic views of the world below, to thrill rides that will test your stamina. We saw a lot of grandparents who seemed somewhat joyful that their precious ones chose the merry-go-round instead of that ride where gravity takes hold and the bottom seems to fall out of your existence.

At least on this weekend, there was more than a passing interest in Diamond Lil’s Can-Can Revue, a colorful treat in itself, but made even more special with a visit by the Easter Bunny to lead all in “the bunny hop.”

As Robbins went from feature to feature, seeing who was enjoying what features, she said, “This is really beautiful, sunny weather for an opening day. It started out a little cold, but that didn’t keep people away. Whether or not it is a record day for attendance, it is much better than last year.”

BLOWING ROCK — Avoiding what Jimmy Addison describes as a “black exclamation point” became an urgent mission for a growing group of Blowing Rock residents. With the help and cooperation from developer John Winkler and still-needed approval of the board of commissioners, the coalition is “going green.”

At issue is Winkler’s recently approved development of a subdivision off Green Hill Road, with many nearby property owners objecting to it even though the developer’s town council-approved plans satisfy the town’s R-15 residential zoning requirements with no requested variances.

“That property lies at the southern entrance to Blowing Rock along U.S. 321,” said Addison. “The problem with the original site plan is that when people come around the curve as they enter town the first thing they would see is that new street coming down the slope as a straight line to the cul-de-sac at the bottom. Essentially it would be a black exclamation point instead of the green space that is there now.”

Addison and his wife, Dinny, are at the center of the group of neighboring property owners who have negotiated with Winkler to prospectively buy the lower four parcels of the otherwise planned subdivision and preserve them as green space.

“John Winkler has been great to work with,” said Dinny Addison. “You can tell his heart is in the right place.”

Winkler, according to the Addisons, has agreed to reconfigure his development without the four lower parcels, the exclamation point not needed.

“I applaud what the Green Hill group is trying to do,” said Winkler. “We have agreed on a price for the lower parcels. The plan, as I understand it, is for community members to contribute funds to the non-profit Village Foundation for the purchase of the real estate. Then the town needs to accept donation of the land and agree to its minimal maintenance.”

“What was originally approved in the Winkler plans was his construction of a new street and cul-de-sac that would be turned over to the town,” said Jimmy Addison. “The town’s maintenance costs for that would include snow removal, cleaning, and eventual repaving. The elegance of our plan is that the street and cul-de-sac would not be built, so the town saves on that maintenance cost. Instead, the town might have to mow the grass on those lower lots a couple of times during the summer.”

Dinny Harper Addison is one of three “Harper sisters” involved with helping to organize the proposed re-do of the development project. They are descended from great-great grandfather James Harper, who reportedly built the first summer home in Blowing Rock, in 1854. The other Harper sisters include Lee Harper Vason and Anne Harper Bernhardt.

“Besides the first impression of Blowing Rock that people will have when they arrive in Blowing Rock at the south entrance, there are four important aspects that make this property and our efforts to preserve it really special,” said Dinny Addison. “First, it is part of the Green Park Historical District. That registration doesn’t necessarily protect it, but it does suggest that the land is of historical significance and might want to be preserved.

“Second, there is a good deal of history associated with these properties,” said Dinny Addison. “Not only was this the former site of Hole No. 6 of the original Blowing Rock Country Club golf course, but local historian Steve Sudderth has identified it as the site of Fort Rollins, dating back to the Civil War era. Sudderth found descriptions of the fort and its location in the book, ‘The War Trails of the Blue Ridge,’ by Shepherd Monroe Dugger (2012, Literary Licensing, LLC, Whitefish, Mont.).

Addison also pointed out that the parcels in question are very close to the headwaters of the Yadkin River, the spring for which under the parking lot of what is now the Green Park Inn. According to Sudderth, the spring served as the source of fresh water for Fort Rollins, and would have been part of the fort’s campus.

“Then, of course, you have the fact that this property is at the Eastern Continental Divide, and right at the ‘Welcome to Blowing Rock’ signage,” said Addison.

Oval Jaynes, who with wife Priscilla own one of the houses adjacent to the parcels that would be protected as green space said, “I have a conflict of interest in commenting, really, because certainly I would benefit from the preservation of green space instead of building houses. But yes, I think green space there is the better choice.”

“When you come right down to it,” said Addison, “green space is a major economic driver in Blowing Rock, the outdoors and the lack of density in our residential communities. We need to encourage developers to protect green space.”

Addison reported that the fundraising is being coordinated by resident Wayne Vason and that $220,000 of the needed $300,000 had been pledged so far.

“The Village Foundation, which is a 501©(3) non-profit, has graciously agreed to accept the donations as charitable contributions earmarked for this purpose,” said Addison. “Once we have the money, the land those four lower parcels will be purchased and the property donated to the town, if the board of commissioners will accept the gift and the rights and responsibilities associated with its ownership. If we can make this happen, then the gateway to Blowing Rock will be preserved as green space.

“I can’t begin to tell you how amazingly great John Winkler has been to work with,” said Addison. “Not only has he agreed to sell us those parcels at a reasonable price, but he has voluntarily prepared revised site plans for his project to reflect our preservation of this property. He has been proactive in helping us find solutions for what many of us see as a problem.”

People who would like to contribute to the effort to purchase the land and preserve it as green space may make checks payable to The Village Foundation, noting that it is for the Gateway Project, P.O. Box 2716, Blowing Rock, NC, 28605.

BLOWING ROCK — Demolition of the two small houses on the 0.9-acre parcel behind Speckled Trout and site preparation before beginning construction of a new hotel, The Embers, is scheduled to begin next week, according to the developer.

Stephen Barker, principal of the Catellus Group, LLC, the developer, said that after the long vigil and delayed paperwork from the state for the demolition, the beginning activities have been pushed into next week.

The Embers Hotel was originally monikered “Rainey Lodge.” The conditional use permit was approved by 3-1 vote of the Blowing Rock board of commissioners at the June 11, 2019 meeting of town council. The hotel is planned as a 40-room hotel, with bar and restaurant. In spite of the parcel’s zoning as commercial and the final plans requested no variances from town code, the project was met with resistance, including more than 10 hours of quasi-judicial public hearings.