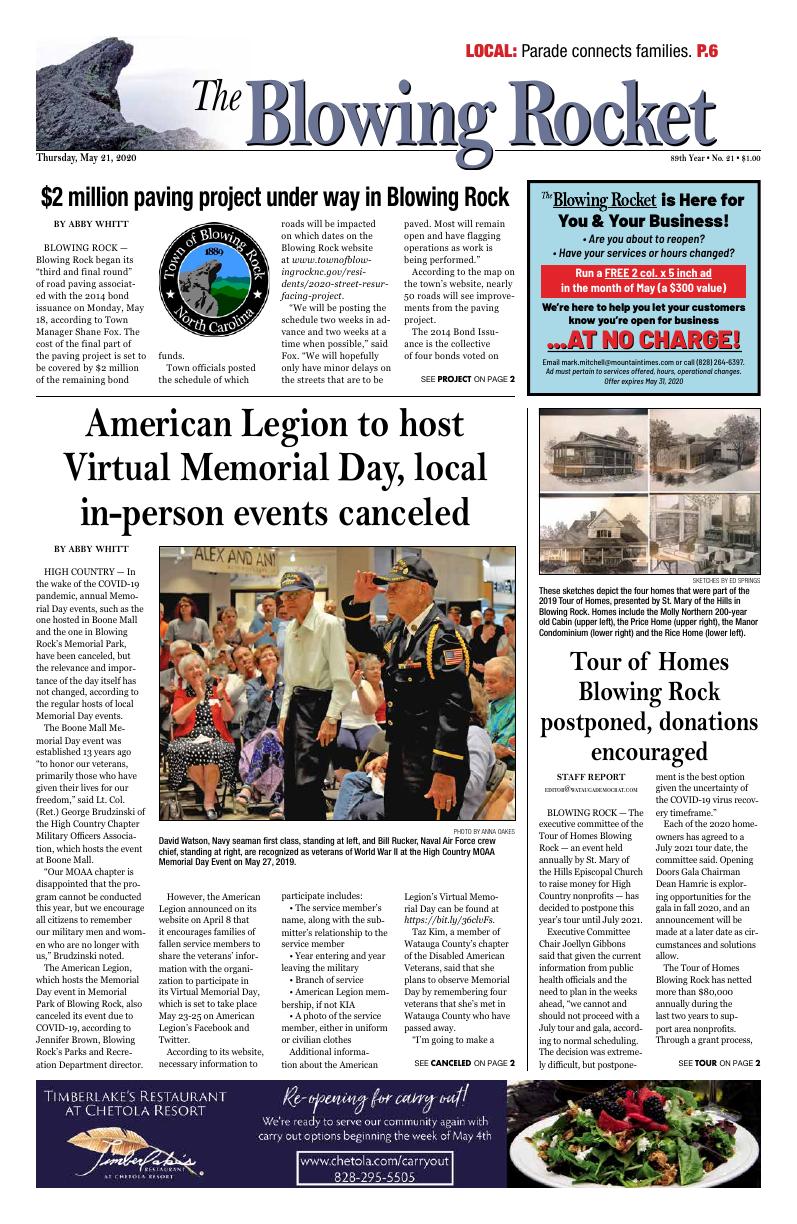 BLOWING ROCK — Blowing Rock began its “third and final round” of road paving associated with the 2014 bond issuance on Monday, May 18, according to Town Manager Shane Fox. The cost of the final part of the paving project is set to be covered by $2 million of the remaining bond funds.

Town officials posted the schedule of which roads will be impacted on which dates on the Blowing Rock website at www.townofblowingrocknc.gov/residents/2020-street-resurfacing-project.

“We will be posting the schedule two weeks in advance and two weeks at a time when possible,” said Fox. “We will hopefully only have minor delays on the streets that are to be paved. Most will remain open and have flagging operations as work is being performed.”

According to the map on the town’s website, nearly 50 roads will see improvements from the paving project.

The 2014 Bond Issuance is the collective of four bonds voted on and approved by Blowing Rock residents who voted in the November 2014 elections. The bond proposals were added to the ballots by the Town of Blowing Rock, according to Blowing Rocket reports.

The total bond issuance totaled $13 million, $9 million of which was “for the purpose of paying capital costs of providing streets and sidewalks.”

At least 70 percent of voters approved each of the four bond proposals.

The Blowing Rock Memorial, listing citizens who died while in service, as shown on Memorial Day 2019, May 27.

HIGH COUNTRY — In the wake of the COVID-19 pandemic, annual Memorial Day events, such as the one hosted in Boone Mall and the one in Blowing Rock’s Memorial Park, have been canceled, but the relevance and importance of the day itself has not changed, according to the regular hosts of local Memorial Day events.

The Boone Mall Memorial Day event was established 13 years ago “to honor our veterans, primarily those who have given their lives for our freedom,” said Lt. Col. (Ret.) George Brudzinski of the High Country Chapter Military Officers Association, which hosts the event at Boone Mall.

“Our MOAA chapter is disappointed that the program cannot be conducted this year, but we encourage all citizens to remember our military men and women who are no longer with us,” Brudzinski noted.

The American Legion, which hosts the Memorial Day event in Memorial Park of Blowing Rock, also canceled its event due to COVID-19, according to Jennifer Brown, Blowing Rock’s Parks and Recreation Department director.

However, the American Legion announced on its website on April 8 that it encourages families of fallen service members to share the veterans’ information with the organization to participate in its Virtual Memorial Day, which is set to take place May 23-25 on American Legion’s Facebook and Twitter.

According to its website, necessary information to participate includes:

• American Legion membership, if not KIA

• A photo of the service member, either in uniform or civilian clothes

Additional information about the American Legion’s Virtual Memorial Day can be found at https://bit.ly/36clvFs.

Taz Kim, a member of Watauga County’s chapter of the Disabled American Veterans, said that she plans to observe Memorial Day by remembering four veterans that she’s met in Watauga County who have passed away.

“I’m going to make a brownie and put a candle on it to remember them and their birthdays,” Kim said, adding that “taking action” for a veteran, such as mowing a lawn or hanging an American flag, speaks louder than a quiet observation of the day.

These sketches depict the four homes that were part of the 2019 Tour of Homes, presented by St. Mary of the Hills in Blowing Rock. Homes include the Molly Northern 200-year old Cabin (upper left), the Price Home (upper right), the Manor Condominium (lower right) and the Rice Home (lower left).

BLOWING ROCK — The executive committee of the Tour of Homes Blowing Rock — an event held annually by St. Mary of the Hills Episcopal Church to raise money for High Country nonprofits — has decided to postpone this year’s tour until July 2021.

Executive Committee Chair Joellyn Gibbons said that given the current information from public health officials and the need to plan in the weeks ahead, “we cannot and should not proceed with a July tour and gala, according to normal scheduling. The decision was extremely difficult, but postponement is the best option given the uncertainty of the COVID-19 virus recovery timeframe.”

Each of the 2020 homeowners has agreed to a July 2021 tour date, the committee said. Opening Doors Gala Chairman Dean Hamric is exploring opportunities for the gala in fall 2020, and an announcement will be made at a later date as circumstances and solutions allow.

The Tour of Homes Blowing Rock has netted more than $80,000 annually during the last two years to support area nonprofits. Through a grant process, organizations such as Hospitality House, Hunger and Health Coalition, OASIS and Blowing Rock CARES have been able to feed the hungry, clothe those in need, provide shelter, offer educational resources, fund a women’s shelter, support the Latino population, promote continual learning and more.

The executive committee said it is aware that many of these same community organizations supported by the tour are experiencing tremendous strain as they respond to the needs of our community during this crisis. These needs will, in all likelihood, continue due to economic hardships affecting populations served.

Even though there is no tour this summer, donors can help by making a donation to St. Mary of the Hills. You can give by 1) sending a check payable to St. Mary of the Hills with “Tour of Homes” in the memo line, mailed to PO Box 14 Blowing Rock, NC 28605, or, 2) visit stmaryofthehills.org and click on “Ways to Give” and donate to Tour of Homes Blowing Rock. Your gift will help funding of area nonprofits that provide essential support to those in need in the High Country.

“Without help, tour proceeds will not be able to fully fund the grant program,” the committee said. “This will result in a tremendous drop in services provided and be keenly felt by the populations served by our community in the upcoming months.”