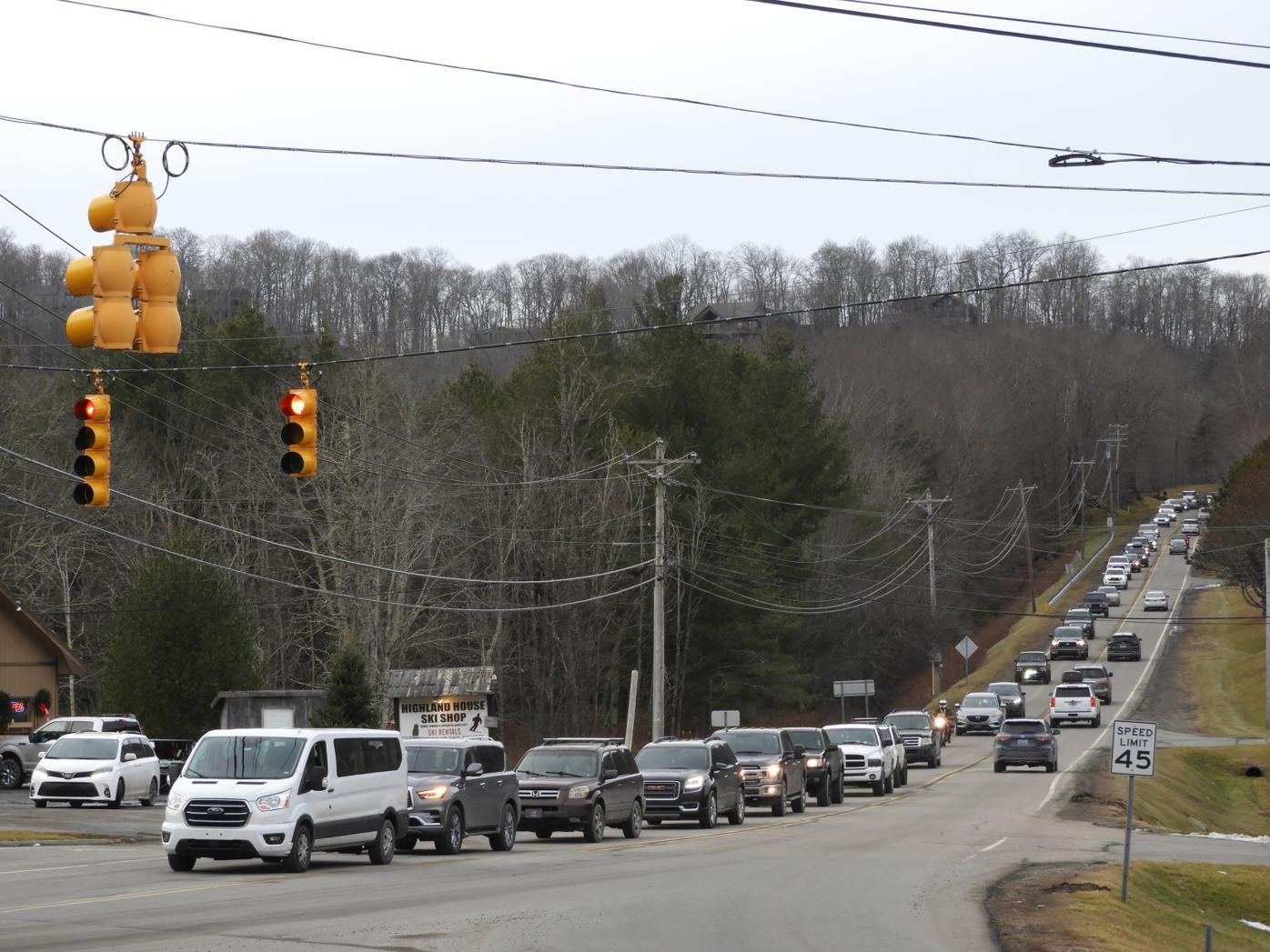 Traffic has remained congested on Tynecastle Highway for the past several weeks, as an influx of tourists venture to the area’s many winter destinations. 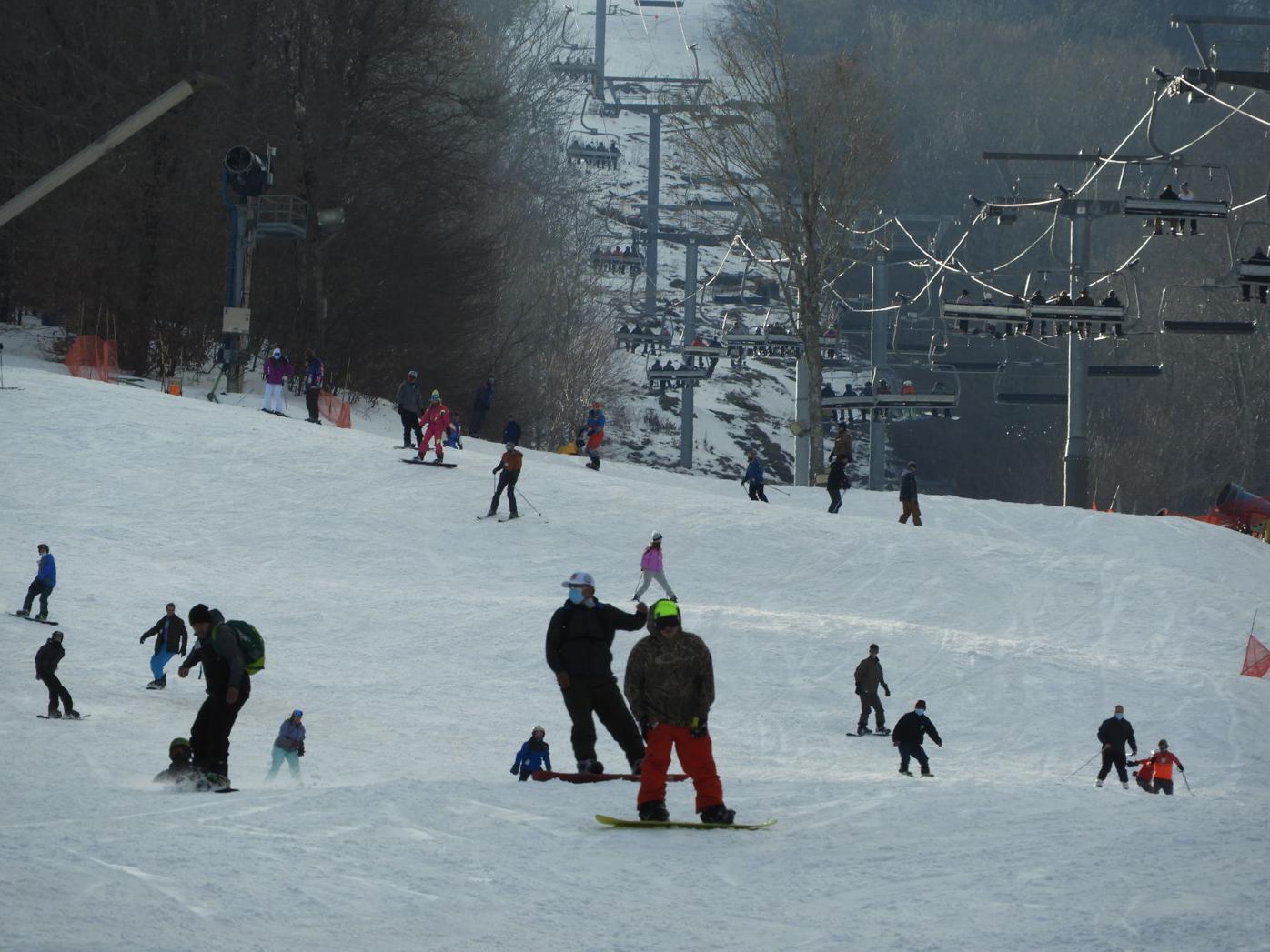 Skiers and snowboarders descend the slopes at Sugar Mountain Resort.

Traffic has remained congested on Tynecastle Highway for the past several weeks, as an influx of tourists venture to the area’s many winter destinations.

Skiers and snowboarders descend the slopes at Sugar Mountain Resort.

HIGH COUNTRY — The winter season in the High Country brings tourists from all around the state and country to come and enjoy the many seasonal offerings that the region has to offer. However, this year has been a bit different, as the pandemic has shut down many amenities in larger cities, making the High Country’s vacation destinations increasingly attractive to those looking to get away for awhile during the holidays.

The effect has been that Avery County in particular has seen an unprecedented amount of visitors flooding into its towns and local areas, due in part to ski resorts having to turn away some visitors because of indoor capacity limitations that have been put in place. Some local leaders, such as Banner Elk Town Manager Rick Owen, say that the area has seen a record number of visitors over the past two weeks, even surpassing the record set in July for the number of tourists visiting Avery County.

“We have definitely seen an increase in traffic, as everybody can see in the county, and we’ve also seen an increase in water usage, which I think relates to an increase in occupancy in residential units and the rental of private residences,” Owen said. “Anyone who watches the national news, follows the CDC or listens to our health department at all has got to have a little bit of concern about having this many people in one area at any given time.”

Owen adds that restaurants around Banner Elk have been experiencing maximum capacity around lunchtime, and that a number of people have even taken to picnicking in the park, despite the winter temperatures. The influx of traffic has also caused a headache for commuters, especially locals. Yet emergency responders have not seen an increase in accidents. The Banner Elk Police Department had only responded to five traffic collisions in December, although EMS has been busy during this time.

“We are getting a lot of calls about traffic being backed up and things. In my 15 or 16 years here in Banner Elk, I don’t ever recall seeing quite so many people. Usually the week between Christmas and New Year’s, it is a huge ski weekend for both Beech and Sugar, but I don’t recall it ever being quite this big,” Banner Elk Police Chief Kevin Hodges said. “The large majority of ambulance calls have not been motor vehicle accidents, but rather accidents on the ski slopes. You’ve got folks that come up and maybe ski once a year or maybe have never skied before.”

Occupancy rates in Beech Mountain have remained high as well throughout the winter tourism season. According to Beech Mountain Tourism Development Authority Director Kate Gavenus, the high demand for rentals and hotel rooms is not just present in Beech Mountain this year but across the whole area.

“We are always very, very busy over Christmas. It is a time of year that we are guaranteed to be 100-percent booked up, but this year the whole High Country is like that. There is not a place to stay anyway in the High Country. That is unusual. Beech Mountain usually has a good surge this time of year because we’re a ski resort, of course, but now everybody is seeing the same thing,” Gavenus said.

Gavenus and the staff at Beech Mountain Visitors Center have worked this season to educate visitors on North Carolina’s COVID-19 regulations and have handed out approximately 200 masks to visitors. Beech Mountain Resort has also been exercising caution during the pandemic in light of the increased interest in skiing and outdoor recreation.

“There’s definitely an increase in interest right now in outdoor recreation. We’re seeing trends nationwide. People are taking up skiing. A lot of journalists are writing articles about it. We’re seeing much higher than normal call volume and inquiries. We have seen a lot of heavy traffic this week,” Talie Freeman, director of Marketing at Beech Mountain Resort, said. “Obviously with the pandemic, we’ve had to limit our capacity and kind of pivot our operations to readjust our offerings. So that has definitely been challenging, but we’re navigating through and trying to provide the safest experience we can for our guests.”

“We’ve seen an increase in skiers and people here, but because of Covid we have also turned people away and reduced capacity. So that might be a little of why we’re seeing heavy traffic. We’re not seeing anything unusual for the holiday period other than that we’ve had to turn people away,” Kim Jochl, Director of Marketing at Sugar Mountain Resort, said. “I think that is what has driven the traffic jams, which I think is all under control anyway. We’re communicating a little bit better and things are a little bit looser now,”

At Appalachian Ski Mtn. in Blowing Rock, the outdoor destination has focused on improving its reservation system to help streamline the check-in process and further reduce the amount of people that are gathering inside at one time.

“Many of the COVID-19-related improvements we made are really an acceleration of investments that we either had planned or maybe should have had higher on our priority list earlier anyway,” Brad Moretz, owner of Appalachian Ski Mtn., said. “A good example is the streamlined online reservation system. Now, every single visitor to our ski slopes must have reserved a time slot. The vast majority, up to 90 percent and more, of our visitors are first reserving those time slots online, but even the walk-ups have to make a reservation through one of our onsite kiosks. Because there are a limited number of time slots, those not making reservations before they get here are taking a risk that a time slot is not available.”