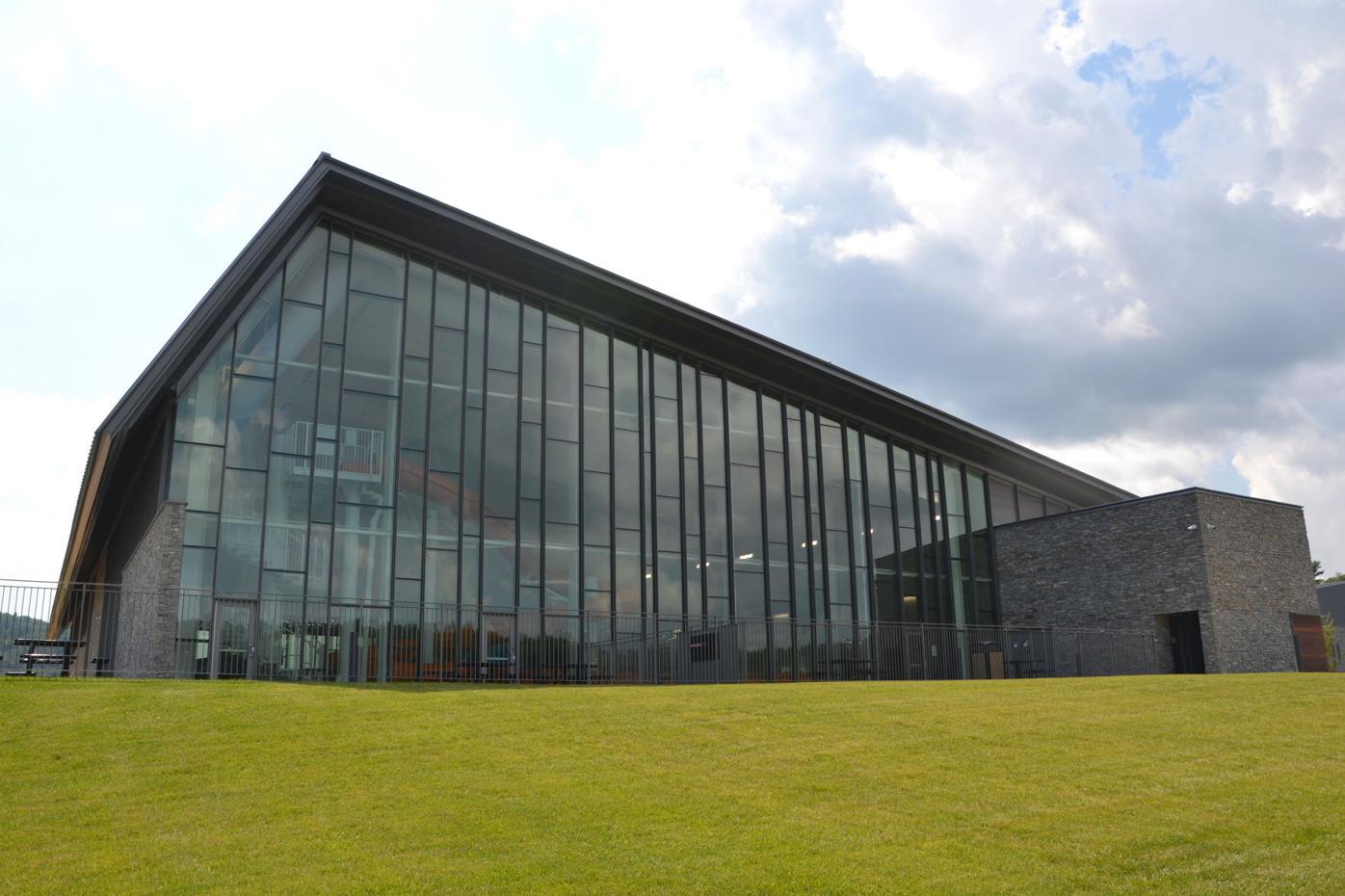 The community recreation center sits along the corner of State Farm Road and Hunting Hills Lane. 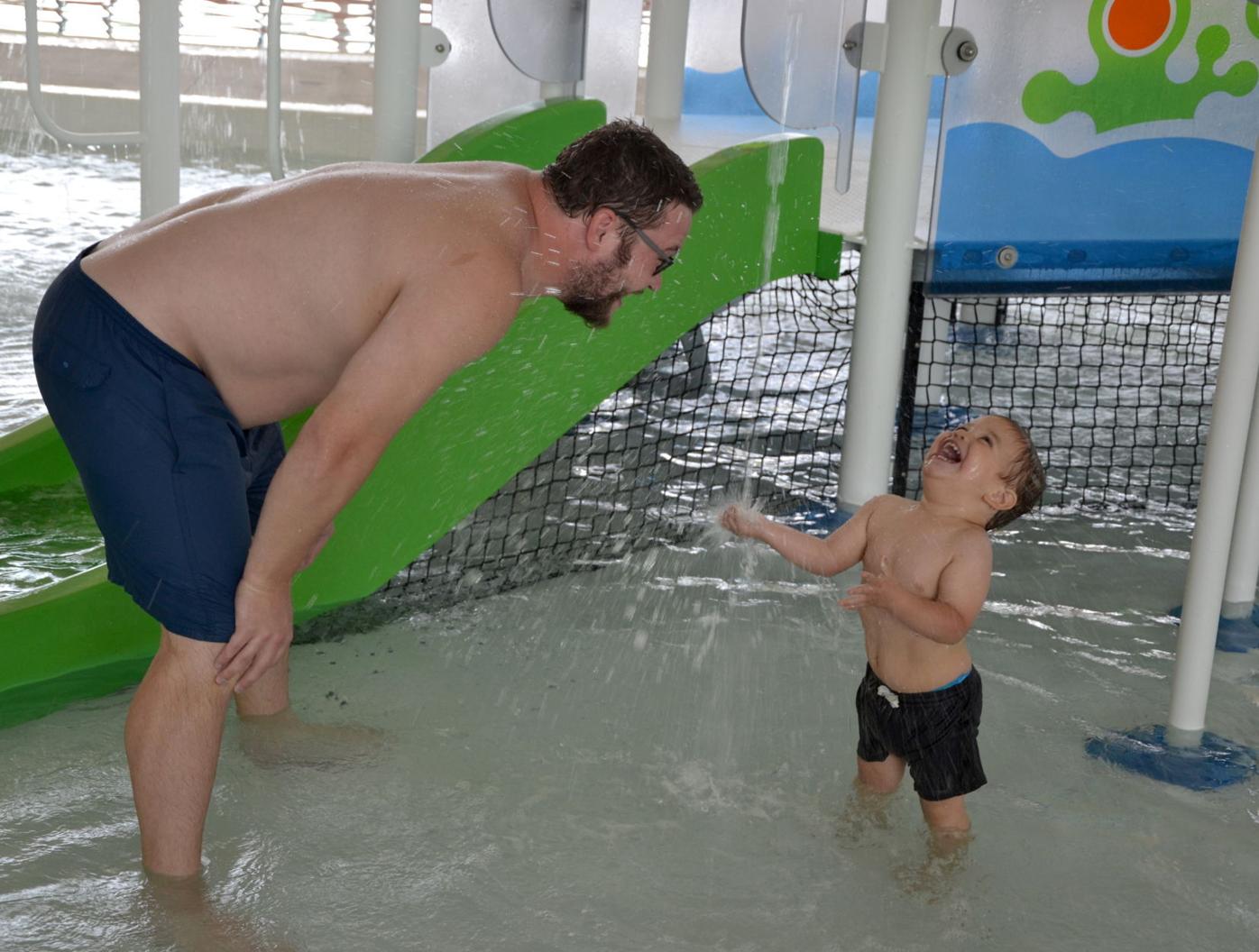 Kyle Huss plays with son James Huss in the children’s section of the leisure pool at the Watauga Community Recreation Center. The center is still closed to the public; the family was brought in for photo purposes. 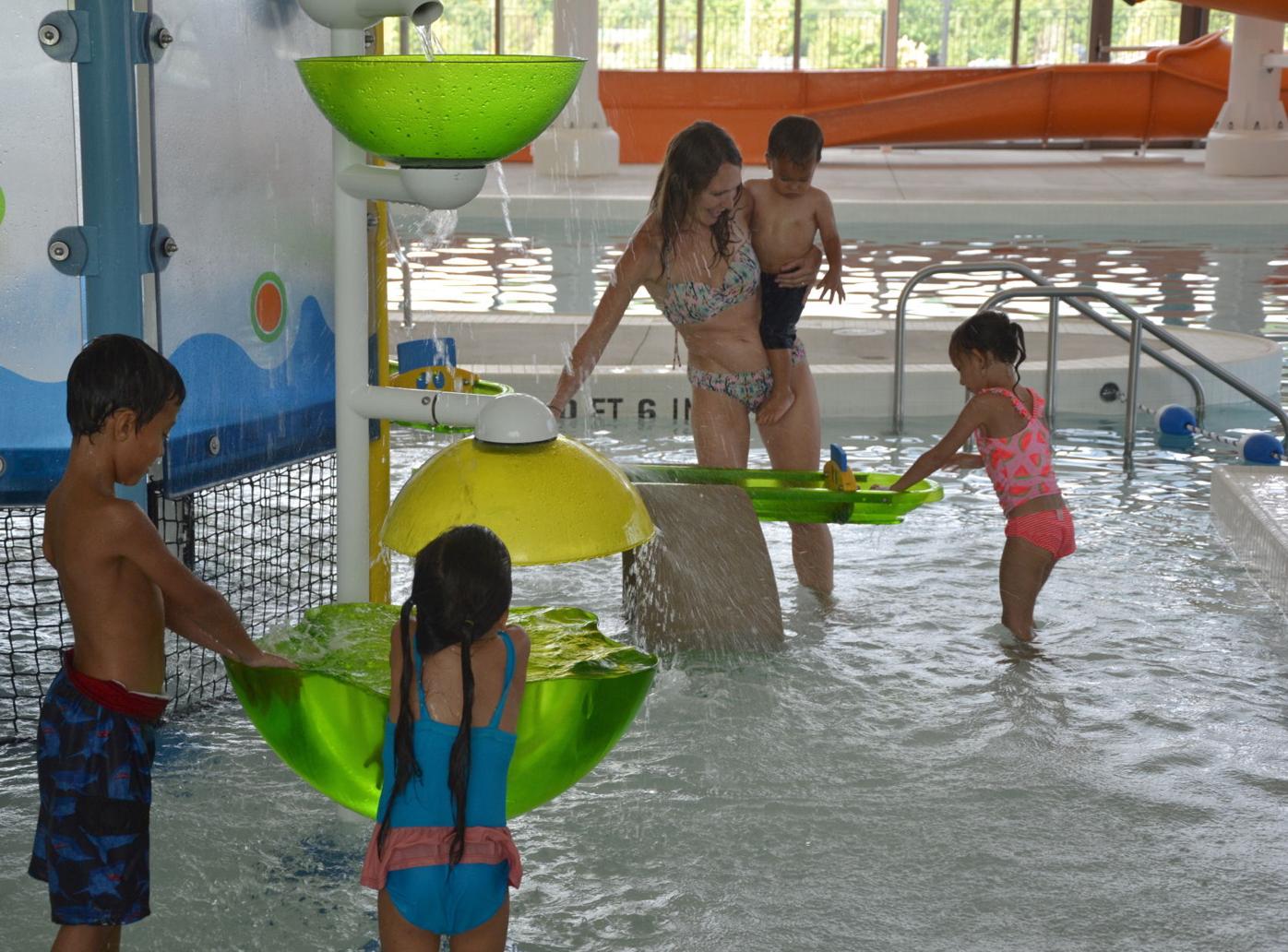 Sherri Pengjad enjoys time in the leisure pool of the Watauga County Recreation Center along side Rocco Pengjad, Zelynda Pengjad, Lucca Pengjad and Milana Pengjad. The center is still closed to the public; the family was brought in for photo purposes. 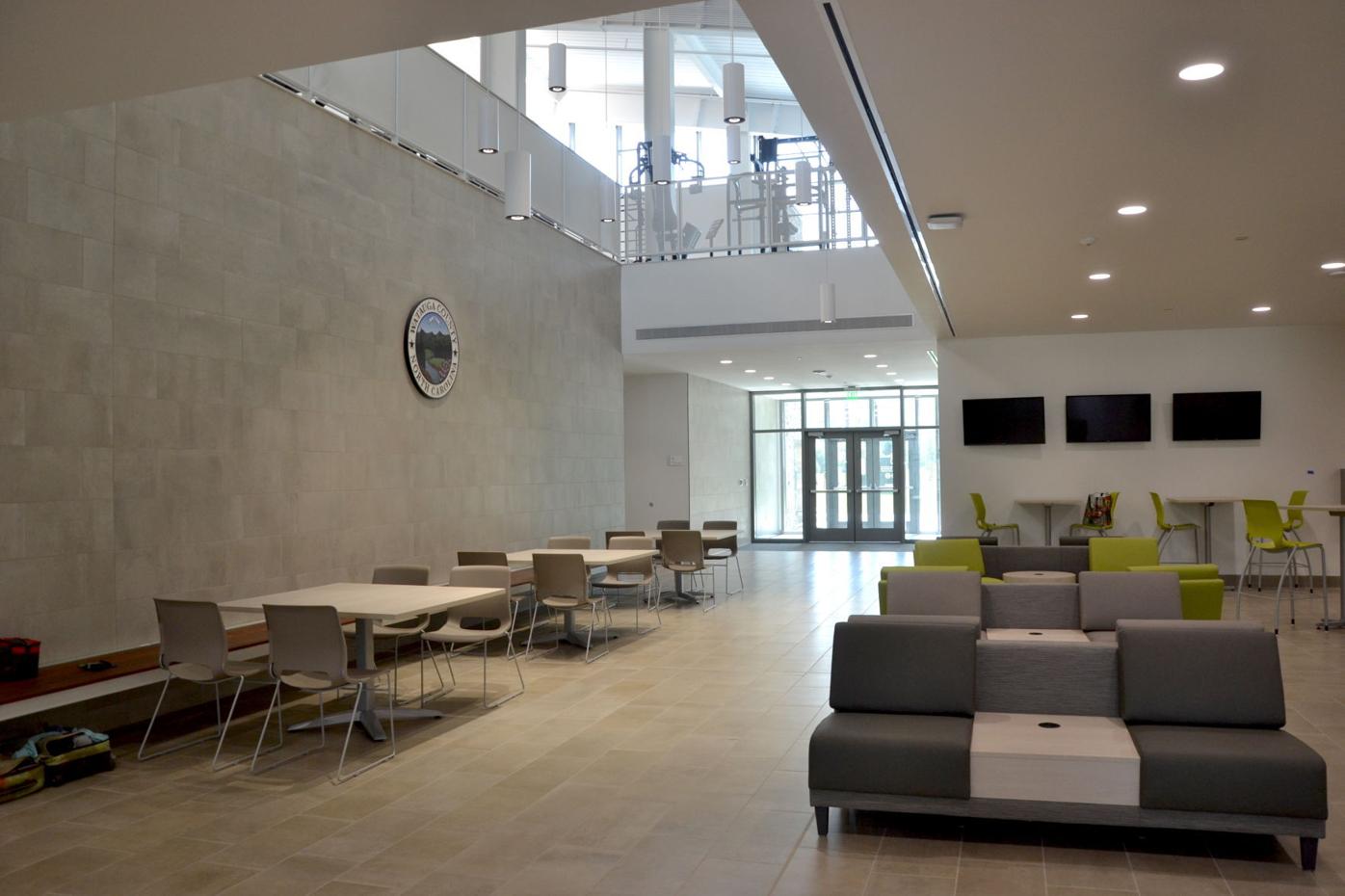 The entrance to the Watauga Community Recreation Center features a lobby with seating and a view to the second floor fitness area. 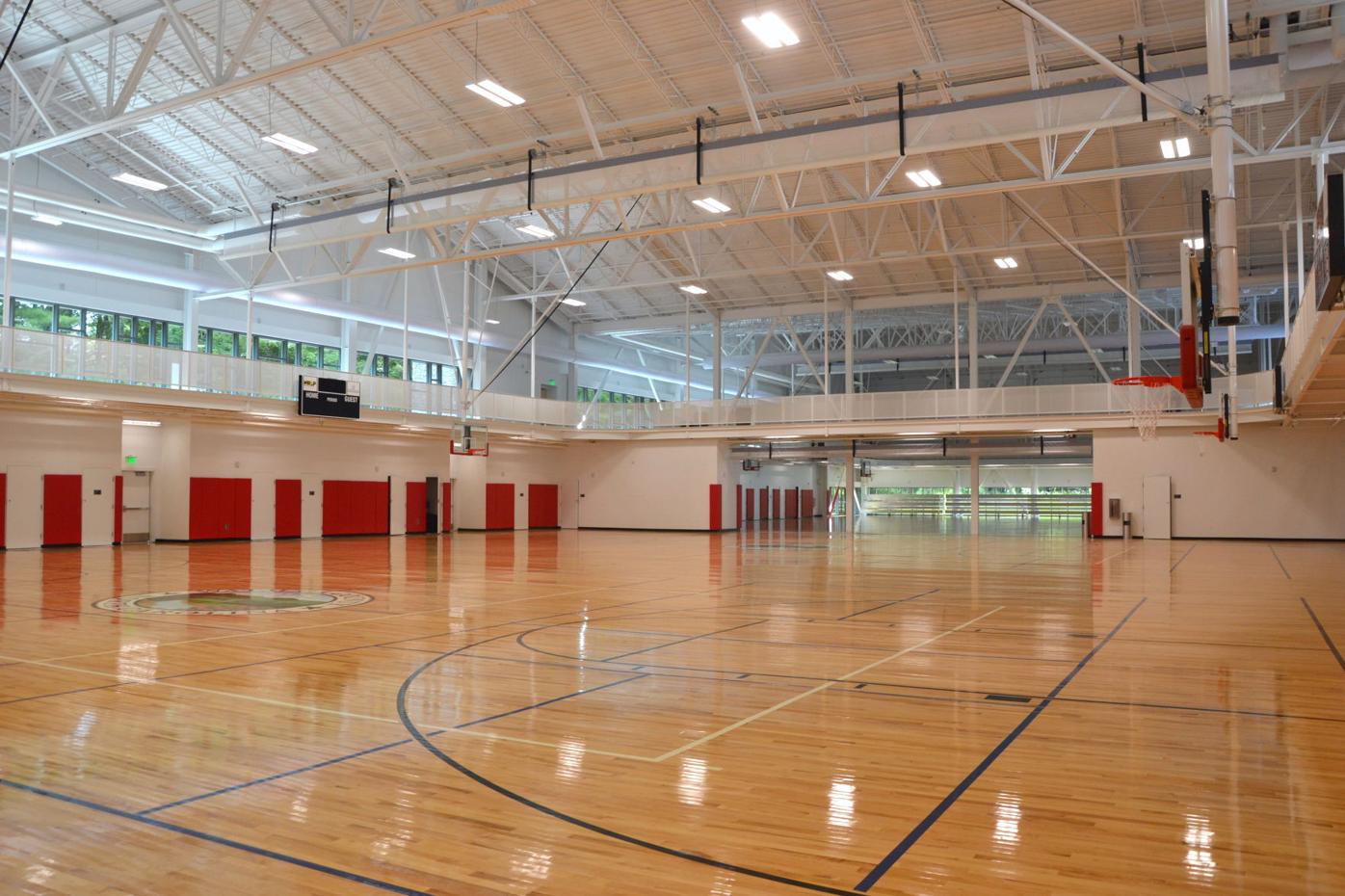 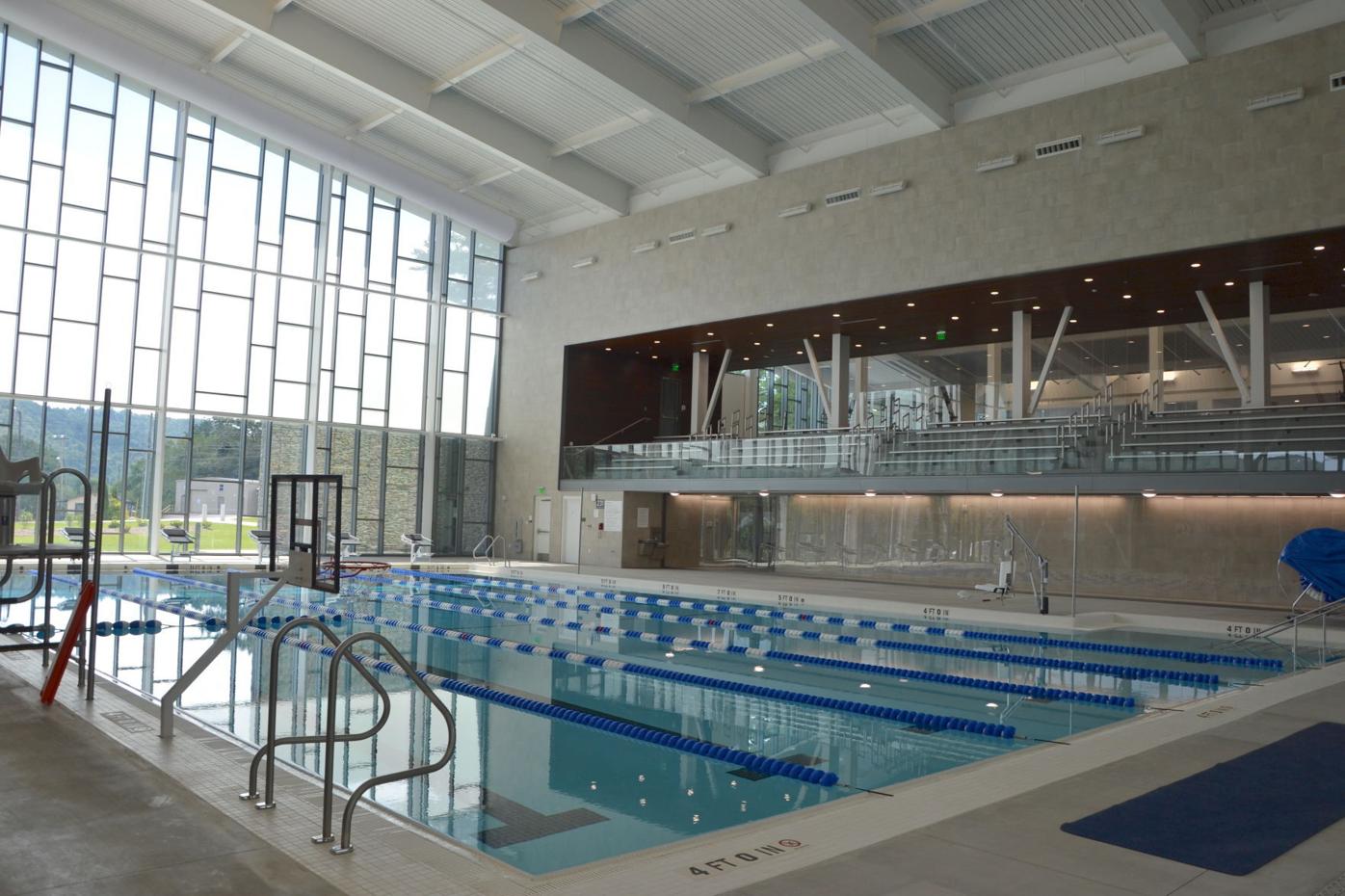 A competition pool at the new community rec center includes second-floor seating for parents and families during swim competitions. 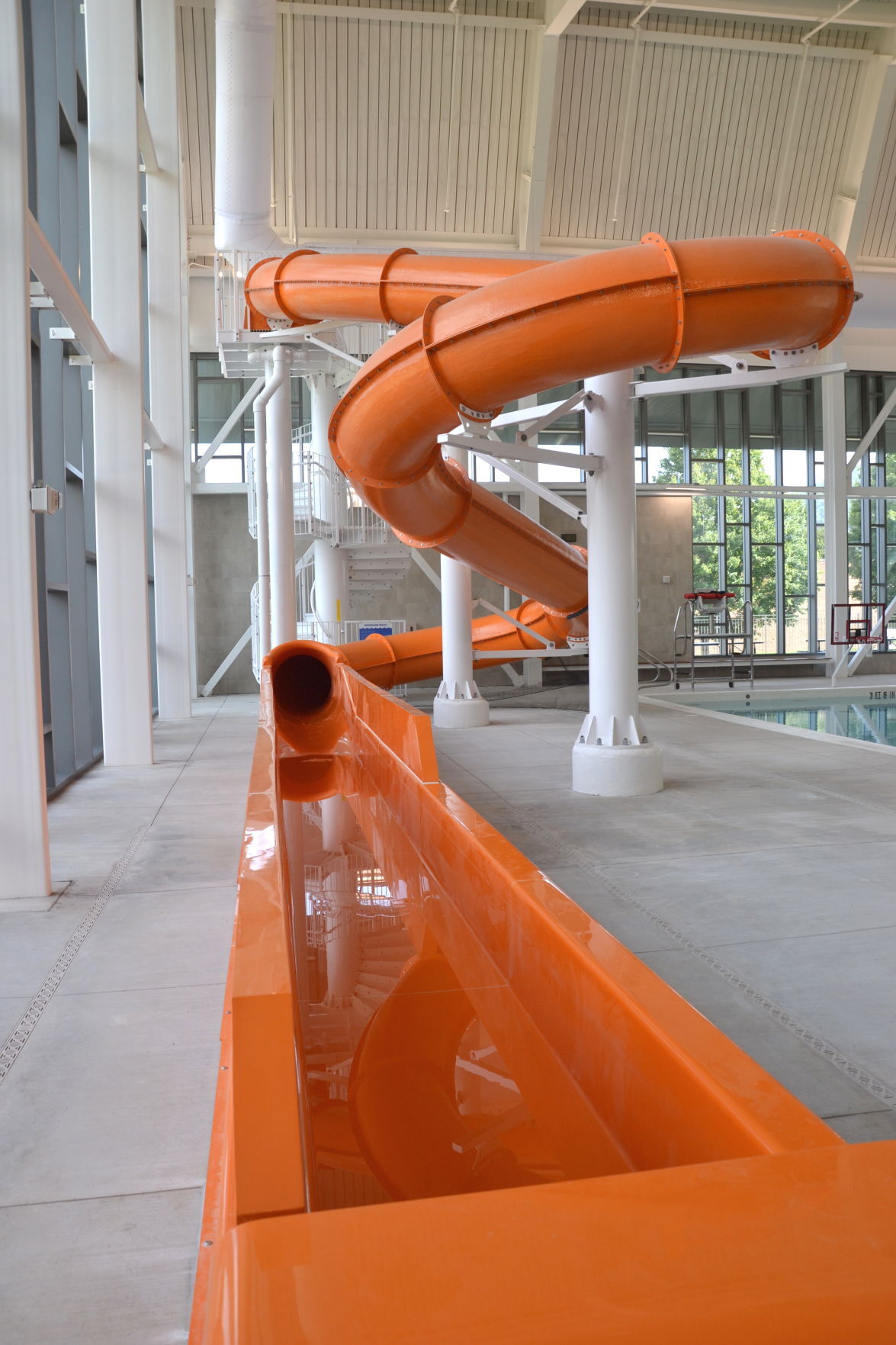 An orange slide is situated in the corner of the leisure pool area. 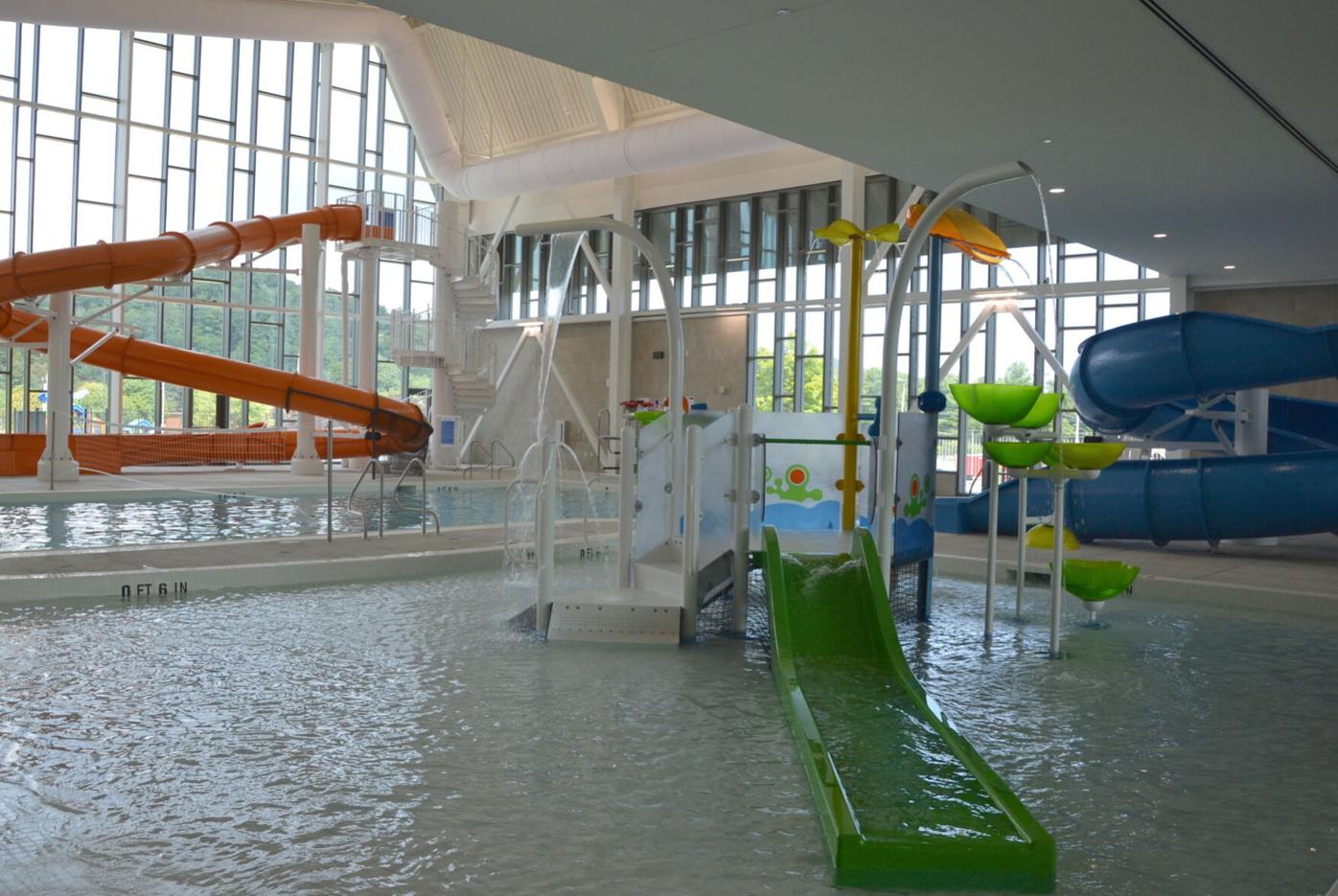 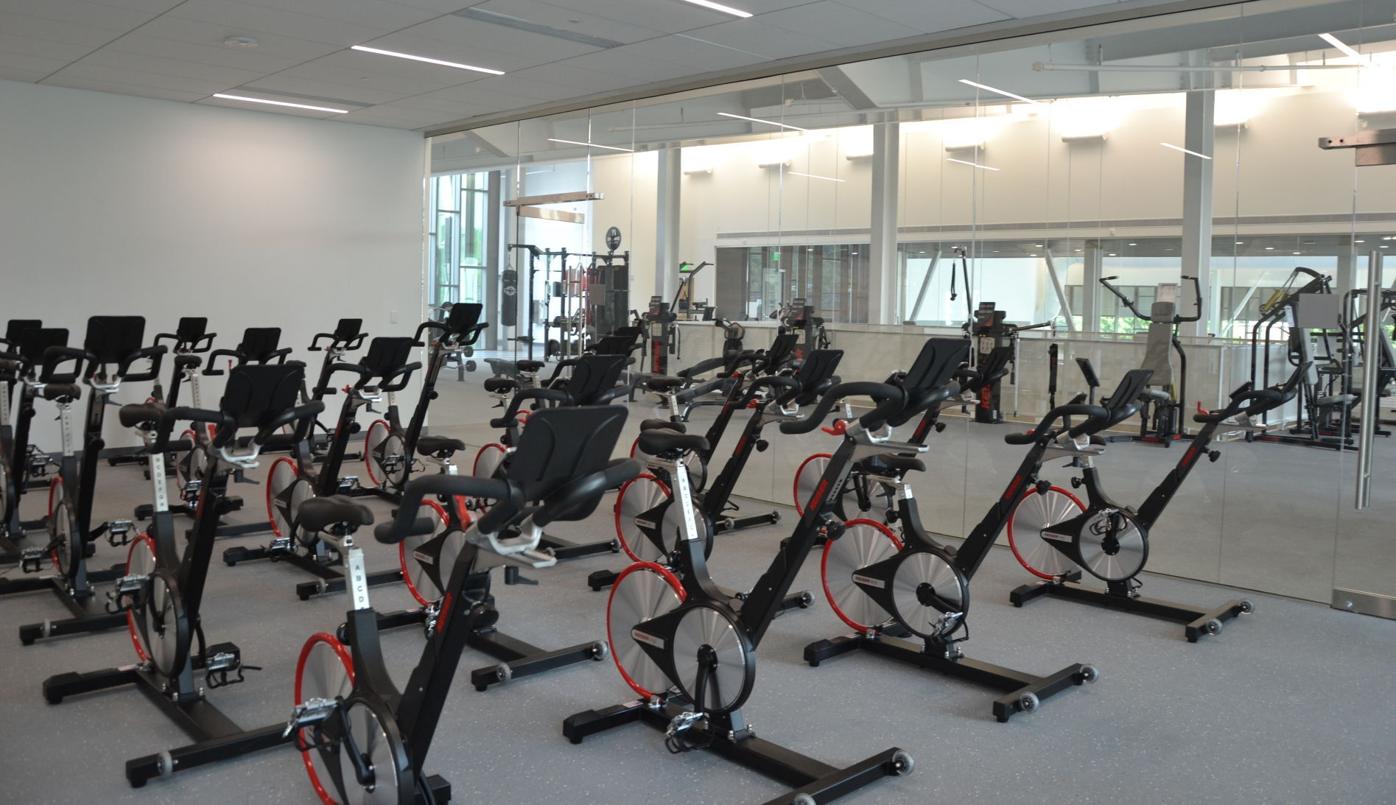 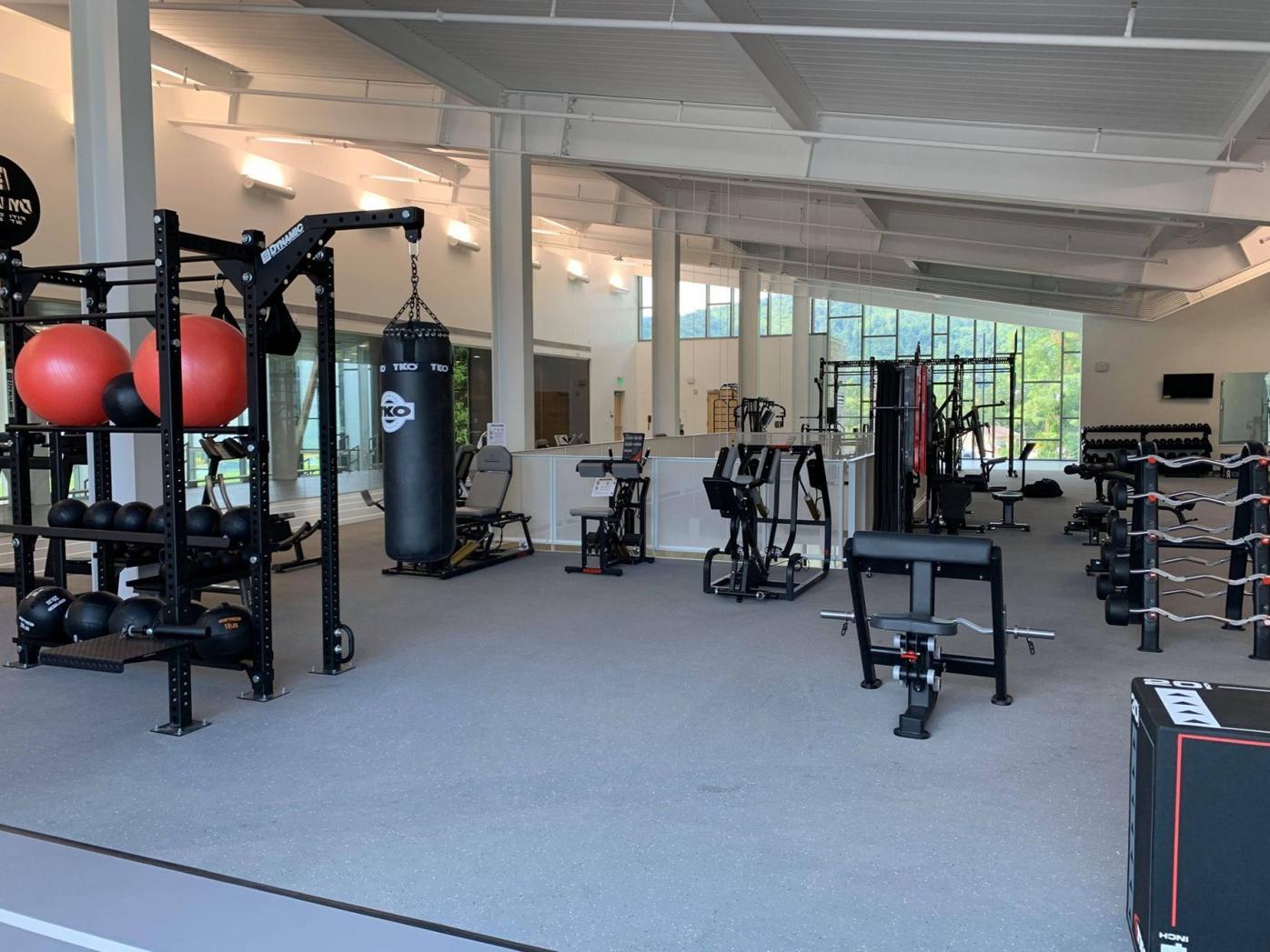 Patrons of the community recreation center will be able to use various pieces of exercise equipment.

BOONE — Three months after the Watauga Community Recreation Center was supposed to have a grand opening, the facility likely is still unable to open despite new state COVID-19 restrictions allowing gyms to operate at 30 percent capacity this Friday, Sept. 4.

The facility is finished and missing its main component — people. County Manager Deron Geouque said on Sept. 1 after Gov. Roy Cooper’s announcement that the WCRC “probably (would) not” open under 30 percent capacity restrictions. He added that 50 percent capacity would be “difficult at best.”

“We have to review and interpret to determine how exactly that would look like for the facility,” Geouque said.

Delaying the WCRC’s opening by three months likely has not allowed the county to meet the projected revenue for the first couple of months of fiscal year 2020-21, Geouque said. However, he said it’s too early to make any kind of projections for revenue loss as the county continues to operate under the state executive orders.

There was no revenue loss for the end of fiscal year 2019-20 as the county has saved some costs on expenditures such as staffing. He said the revenue projected but not collected was estimated at $175,166, and the county’s unspent budgeted expenditures totaled $294,418 — a difference of $119,252.

Watauga Parks and Recreation Director Stephen Poulos said his department is waiting on a set opening date for the WCRC before hiring any part time staff such as lifeguards, front office personnel and fitness instructors. Poulos added that it was hard for parks and recreation staff to set programming schedules — for classes such as spin or yoga — until receiving further guidance from the state.

Poulos said that as recreation professionals, his staff want to be able to offer programs. Having a new space to offer those programs, but not being able to due to restrictions, has been difficult, he said.

“It has been tough,” Poulos said. “We are very excited to open WCRC and offer some old and lots of new programs.”

Watauga Parks and Recreation staff anticipate operating at around a 50 percent capacity when they are able to open, according to Poulos on Aug. 28. This may involve scheduling activities — such as lap swimming or fitness classes — to control how many people can access fitness areas. Poulos added that WCRC visitors will be asked to log in and out of the facility to help staff in the case that a COVID-19 positive case visited the center; this will help staff determine who in the facility may have been exposed during that time.

WCRC staff will also schedule times during the day to allow for additional cleanings, Poulos said. The N.C. Parks and Recreation Association has helped county staff keep in contact with other Parks and Recreation departments across the state to stay up to date with similar cleaning procedures, Poulos said. The WCRC will have additional wipes and hand sanitizers as well as markings on floors to encourage social distancing.

Since the WCRC hasn’t been able to open, Geouque said the contractor continues to finish final detailed items at the facility while staff train on all of the new pool and fitness equipment. Additionally, Parks and Recreation staff have begun transitioning their offices into the new facility, which should be completed during the next month or so, Geouque said.

Polous said he knows that the community’s want for a recreation center has spanned many years. He added that WCRC is not only built for the community and the Watauga County citizens, but will also be an economic driver as the facility brings tournaments, swim meets and other events to the area.

“Words cannot express our sincere appreciation to the Watauga County Board of Commissioners and County Manager Deron Geouque for their total support of this project,” Poulos said. “This is a true community-based project and we have no doubt the WCRC will be a source of pride for all citizens of Watauga County.”

The leisure pool includes two water slides (must be 48 inches to slide), space for aquatic exercise classes and a children’s play area. The competition pool encompasses an upper deck viewing area, a time clock for swim meets and an aqua climbing wall. Patrons will be asked to bring their own towels and locks for locker use as the facility will not provide those items.

The second floor of the facility offers an indoor walking track and a fitness area with equipment like treadmills, spin bikes, ellipticals, jump boxes, free weights and several pieces of Keiser Pneumatic machines. Poulos explained that Keiser’s equipment uses compressed air to add or reduce weight to machines with an air supply system. Keiser stated that its strength equipment weighs less and is quieter than iron-based machines. The facility includes party rooms and community meeting rooms that are rentable to the public once the center is open.

Parks and Recreation staff are in the planning process for its redesigned outdoor amenities, Poulos said. The county plans to replace four outdoor tennis courts, an outdoor basketball court and a picnic shelter. Additionally, the complex will have dedicated outdoor pickleball courts.