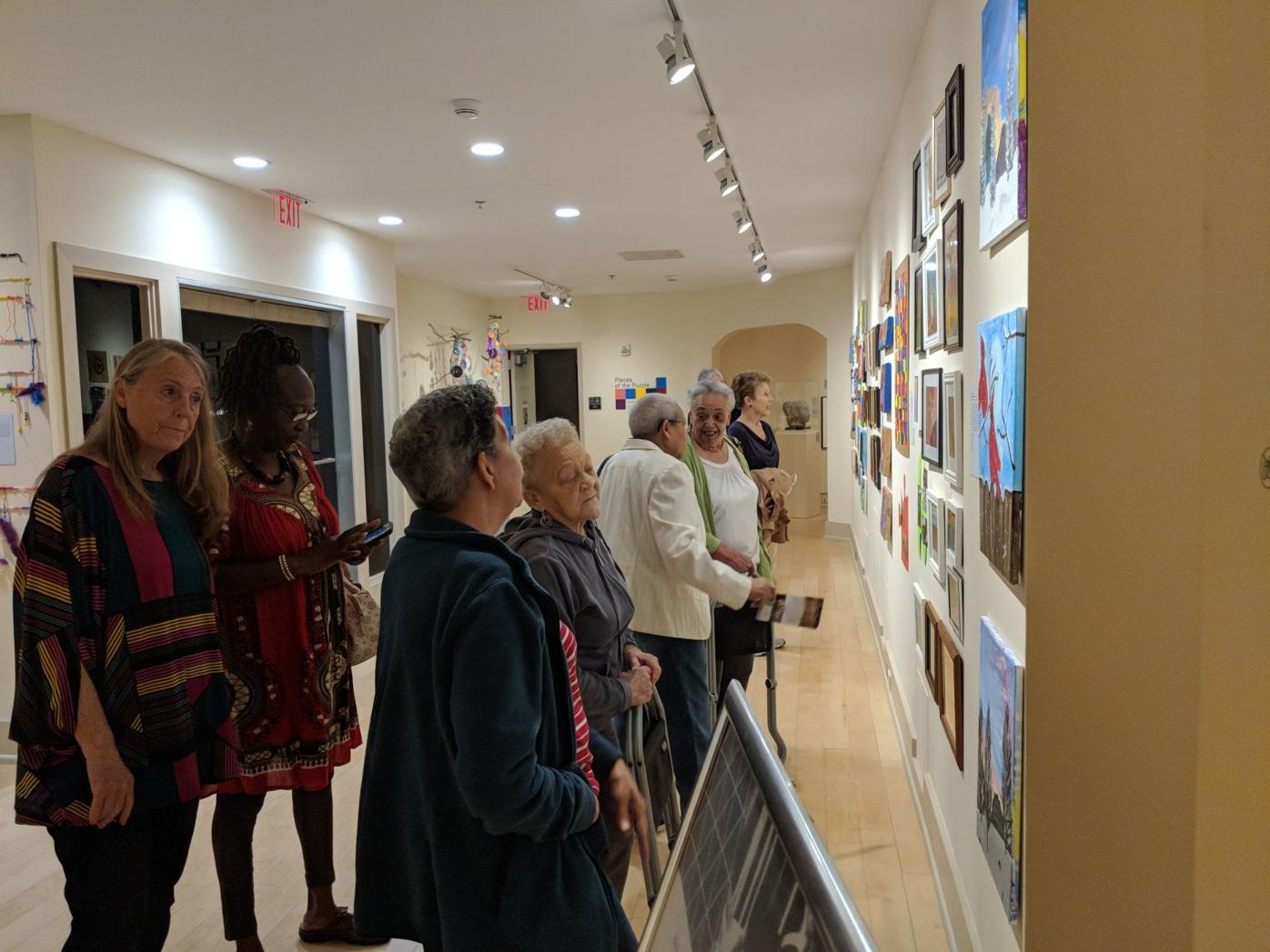 Members of the Junaluska community who work with Laine view their art submissions at the Pieces of the Puzzle exhibit in the Turchin Center for the Visual Arts. Back: Pegge Laine and Monica Abbot. Front: Carolyn Grimes, Betty Grimes, Clara Gordon and Peggy Horton. 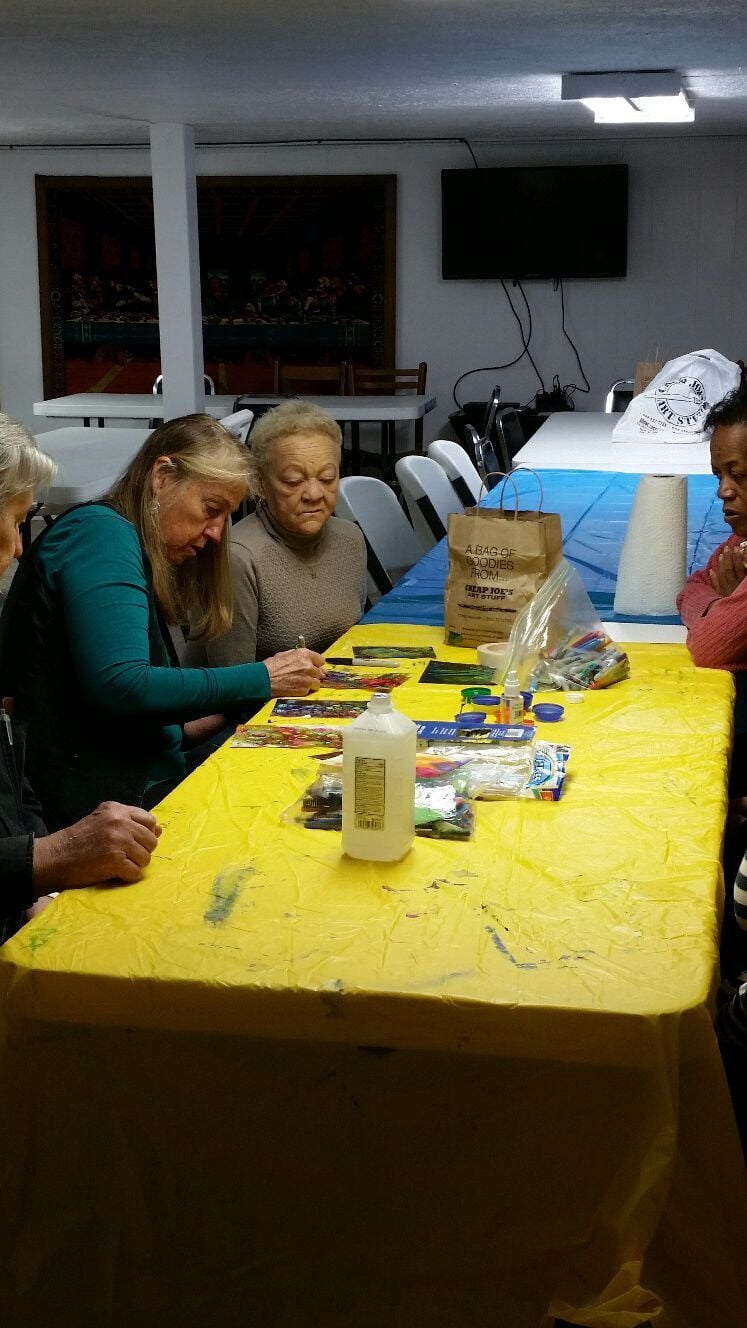 (Left) Pegge Laine, Betty Grimes and Roberta Jackson (right) in the basement of the Boone Mennonite Brethren Church while at an alcohol inks class. 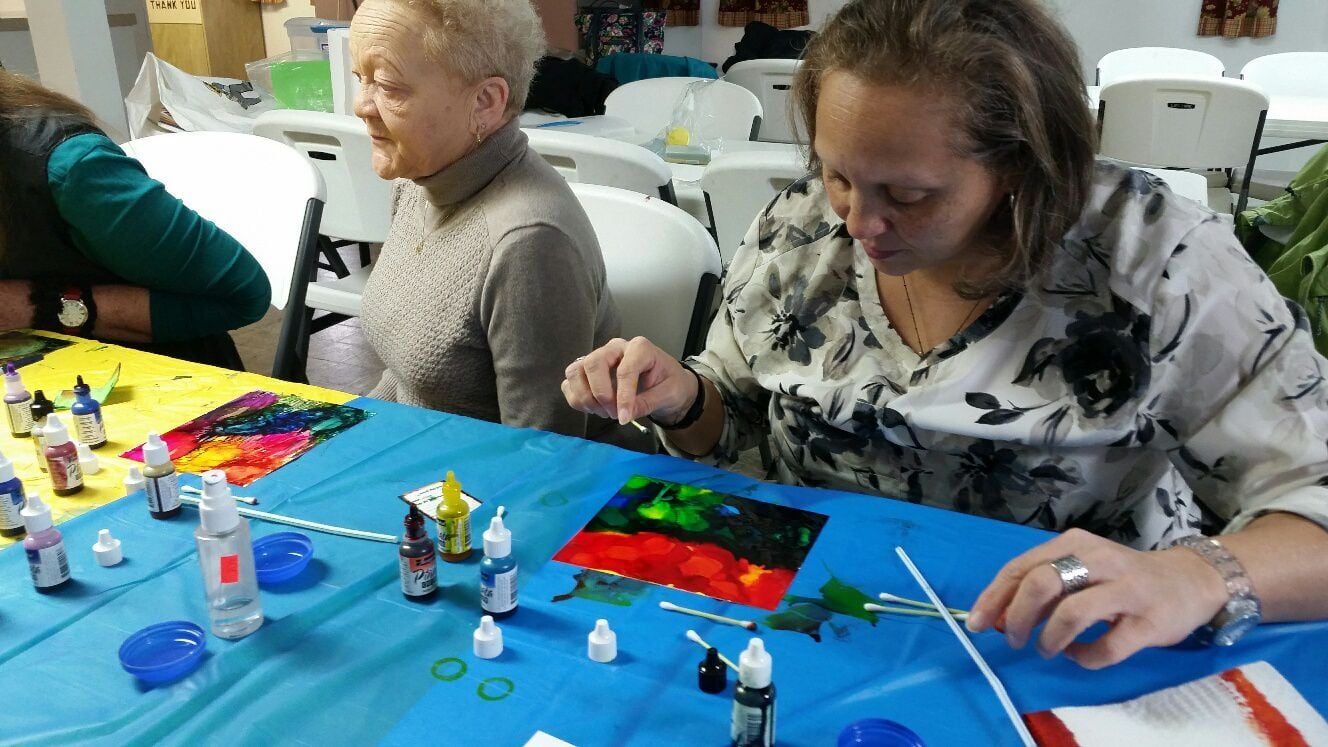 Members of the Junaluska community who work with Laine view their art submissions at the Pieces of the Puzzle exhibit in the Turchin Center for the Visual Arts. Back: Pegge Laine and Monica Abbot. Front: Carolyn Grimes, Betty Grimes, Clara Gordon and Peggy Horton.

(Left) Pegge Laine, Betty Grimes and Roberta Jackson (right) in the basement of the Boone Mennonite Brethren Church while at an alcohol inks class.

With a new grant and arts in mind, the Junaluska community is getting its history preserved and spread through a variety of art-centric projects.

The Central Appalachia Arts & Cultural Growth Fund has awarded the Junaluska community $20,000 to create four projects that remember and honor the contributions of the African American community in Boone.

The project is being led by Pegge Laine, a retired school counselor who worked at Appalachian State’s Turchin Center and wrote the grant, as well as members of the Junaluska community.

“I think art has made us kin in a sense,” Laine said. “We explore things, and we take risks with the art materials.”

The goal of the Central Appalachia Arts & Cultural Growth Fund is “to elevate arts and culture as transformative instruments guided by equity and justice to reclaim the power of our diversity and unique traditions on the path to healing and recovery of our youth, families, communities, and our futures,” according to its website.

With this $20,000 grant, Laine is creating four different art projects with the Junaluska community.

“I did as much as I could through phone calls to get their feedback,” Laine said. “I talked with (the Junaluska Heritage Association) about my ideas. That’s where the ideas came from.”

One of the first projects is creating a heritage garden that recognizes the historical significance of gardening in the community and that will also help address any food insecurity in the community.

She said she got the idea of the heritage garden after reading “Junaluska: Oral Histories of a Black Appalachian Community.” The book is a history of Boone’s historically Black community, Junaluska that took 10 years to create.

“One of the things that I read about in the book was that gardening had been a really, really important part of their ability to live because they didn’t have money,” Laine said. “We would start by growing the things that they grew to be able to live.”

If this heritage garden is successful, Laine hopes to create more plots because she believes gardening helps build community.

The next project is the creation of a quilt trail that shows the schools, churches and businesses which once thrived within the community.

“I’m really very much aware that in talking with them about their heritage and what it was like to live, they’re very aware that the buildings and a lot of parts of their community are no longer there,” Laine said.

A quilt trail is a series of freestanding paintings on wood, metal or quilt squares along a route that shows its history.

The quilt trail will show the heritage of the community so its history does not get lost, Laine said.

The third project is a children’s book written and illustrated by an art group in the community that currently works with Laine. The children’s book will be based on “Junaluska: Oral Histories of a Black Appalachian Community.”

“They talk so much about their childhood (in the book),” Laine said. “That’s why I would want to do it for children, so children would know about the loss of African Americans in Boone.”

The children’s book is one of the projects Roberta Jackson is most excited about.

“One of our goals has always been for people to recognize that we are a community, and we are a part of Boone,” Jackson said.

Jackson said she is also excited for the last project that Laine has in store: honoring the past lives of Junaluska residents with a focus of mapping and identifying the deceased in the Clarissa Hill Cemetery on the outskirts of town.

Clarissa Hill Cemetery, the historically Black cemetery in Boone, has about 40 to 50 unmarked graves currently, according to Laine.

Mapping the graves will include work with the Equal Justice Initiative in Montgomery in conjunction with App State students and the Junaluska Heritage Association.

“I’d like that history to not be lost,” Laine said. “I think that’s an important part.”

COVID-19 has delayed the start of each project, but with the vaccine roll out starting in the community, Laine hopes they can begin working soon.

Those who want to help with these projects can reach out to Laine at delaneylaine@bellsouth.net.