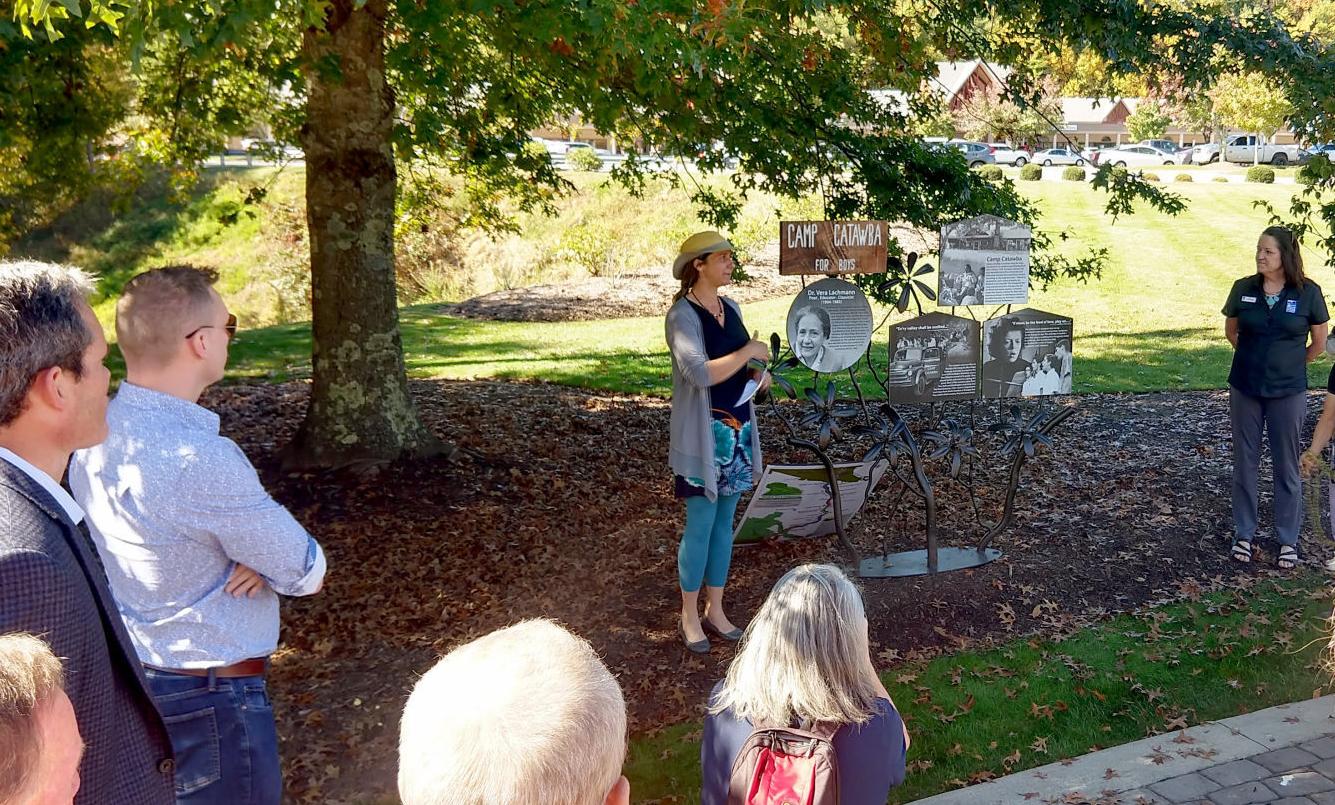 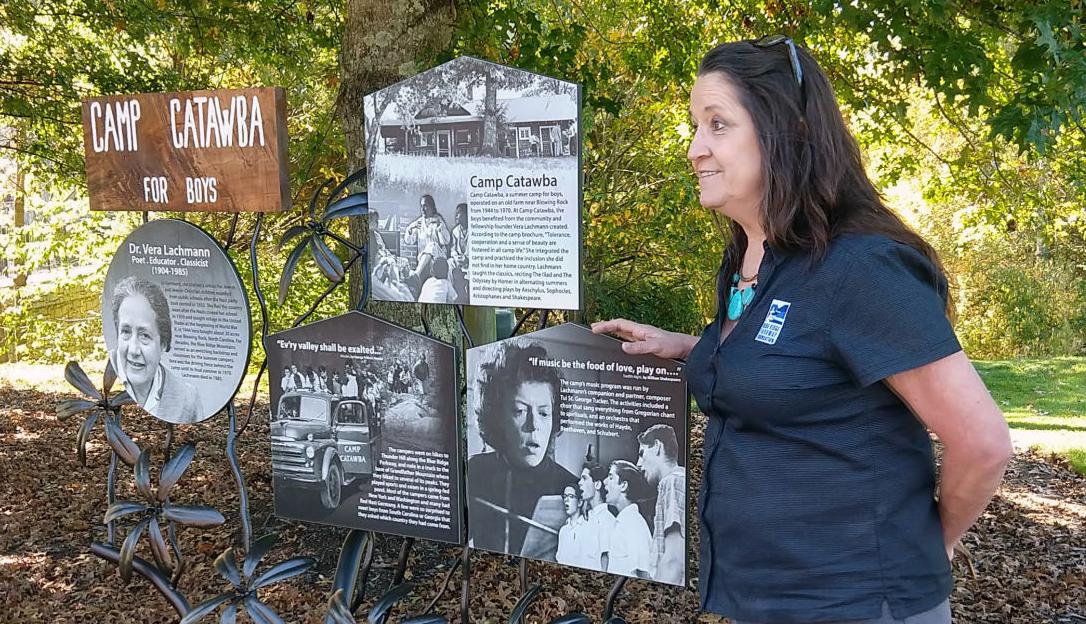 Blue Ridge Parkway Director Carolyn Ward describes the historical research and work that went into the sign’s design and the story of the camp. The commemoration and installation occurred on Oct. 15 at the trailhead of the Middle Fork Greenway in front of Tanger Outlets.

Local supporters of the Middle Fork Greenway and of historical conservation efforts joined the Blue Ridge Parkway Foundation and Blue Ridge Conservancy on Oct. 15 to celebrate the installation of the commemorative Camp Catawba sign.

BLOWING ROCK — Twenty acres of Blowing Rock history were commemorated on Oct. 15 when the Blue Ridge Parkway Foundation, Blue Ridge Conservancy and Tanger Outlets all collaborated on new signage remembering Camp Catawba near where the Middle Fork Greenway will arrive at the shopping center.

Established in 1944 by Vera Lachmann, a poet, classicist and educator, Camp Catawba was a summer camp for boys near the path of what became the Blue Ridge Parkway. Relatively small in size at 20 acres, half in mostly hillside fields and half in forest, the camp also had access to other Blowing Rock features, including what is now the Moses H. Cone Memorial Park that bordered the camp, the Blowing Rock stables, and even Grandfather Mountain.

In many respects, Camp Catawba started out as a haven for boys who were the sons of parents that had fled Nazi Germany, like Lachmann. They were mostly Jewish, but the camp was ecumenical. A July 20, 1951 article in The Blowing Rocket described the then current perception of the facility:

“There are in the camp today 29 boys from France, Germany, Norway, South American countries, New York and New Jersey, just as a sample of the various nationalities which the camp attracts. Absolutely no race or creed is turned away, and soon possibly color will be no bar to admission to the camp.”

According to historical records, Camp Catawba integrated in 1964.

Lachmann brought a cultural flair to the camp through literature and music. She shared Homer’s The Illiad and The Odyssey in alternating summers. She directed a drama program with plays by Aeschylus, Sophocles, Shakespeare, Moliere, Yeats and others. Composer and music director, Tui St. George Tucker developed a choir, gave private lessons, and introduced the boys to classical greats Bach, Mozart, Haydn, Beethoven and the like. She added Gregorian chants and her own arrangements of Negro spirituals

Many of the Camp Staff hailed from New York City and Washington, D.C.

The new signage installed near the trailhead of the Middle Fork Greenway in front of Tanger Outlets commemorates the work of Lachmann and Camp Catawba. The one-of-a-kind sign was funded by the Blue Ridge Parkway Foundation and fabricated by local metalsmith, Aaron Bishop of Snake Mountain Iron Works.

According to Wendy Patoprsty, Director of the Middle Fork Greenway, “Honoring the memory of Camp Catawba along the Middle Fork Greenway makes sense because Dr. Vera Lachmann’s vision goes hand in hand with what Blue Ridge Conservancy’s mission is today — to provide outdoor access to enhance residents and visitors quality of life.”

Editor's Note: This article originally characterized (incorrectly) the camp as being displaced by the construction of the Blue Ridge Parkway. We have subsequently received new information that such was not the case.