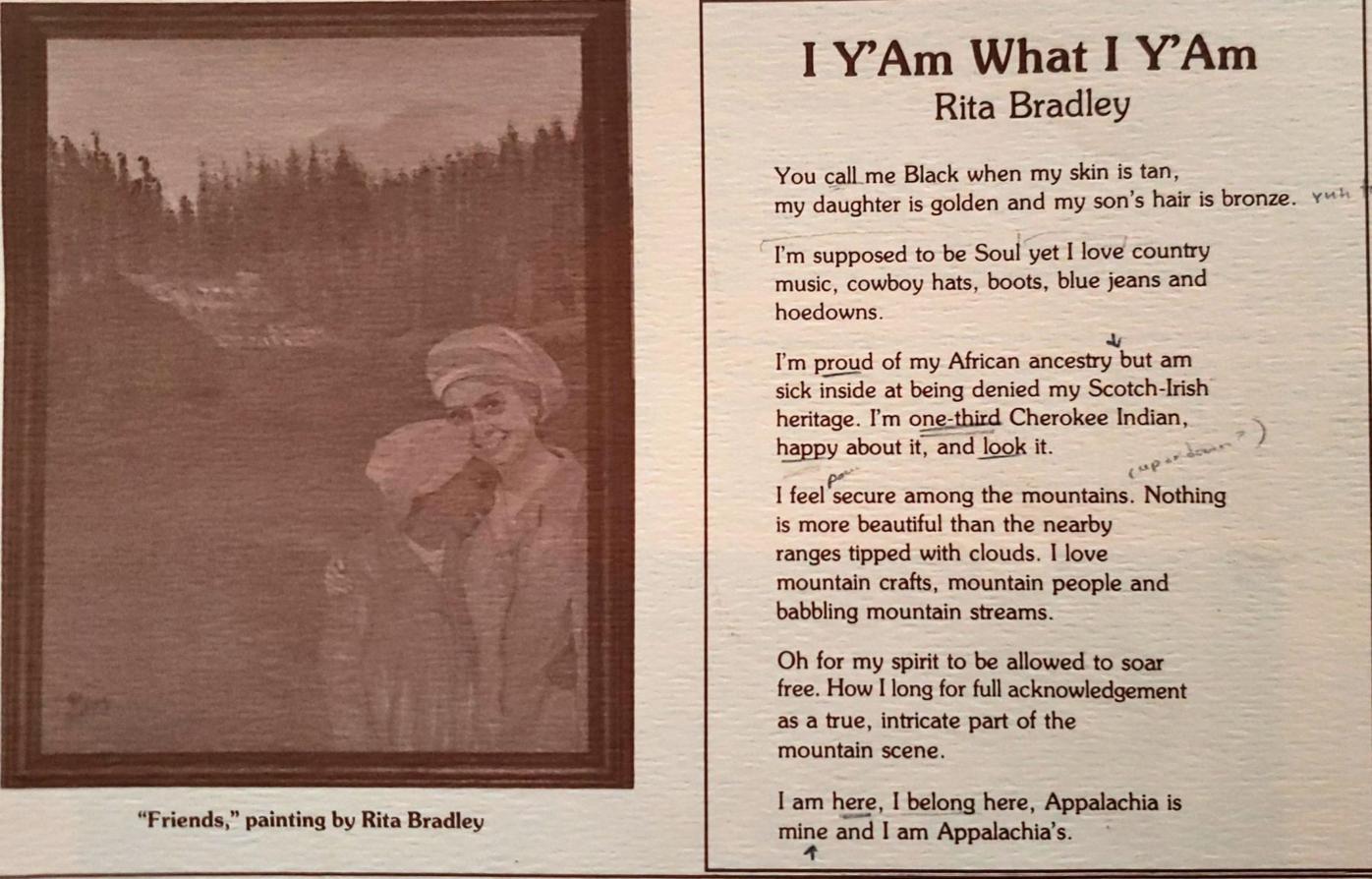 This painting and poem from Rita Bradley was shared by Ajena Cason Jones during a June 15 presentation.

This painting and poem from Rita Bradley was shared by Ajena Cason Jones during a June 15 presentation.

The event was moderated by Dale Caveny, board of trustees member for the Blue Ridge Conservancy. The first speaker was Rebecca Branson Jones, a musician and filmmaker who studied at Appalachian State University, served as an apprentice editor on the Ken Burns documentary Country Music and has a documentary series about mental health due to air on PBS in 2022.

The presentation also included Dr. Carmen F. Foster — a public historian with expertise in organization leadership, team development and facilitation as a consultant and coach for senior executives — who lent her insights and memories about traveling the parkway with her family as a child and her connection to the parkway.

Situating the conversation in the historical context of the creation of the Blue Ridge Parkway, Jones presented an updated version of research she conducted as a graduate student at Appalachian State University in 2009.

“First, I’d like to start by acknowledging colonization is at the root of racism. National parks were created by violently displacing and breaking treaties with indigenous people,” Jones said. “The Blue Ridge Parkway sits on the unceded lands of the Cherokee, Monacan and Catawba people, and we acknowledge them as the past, present and future caretakers of this land.”

Jones presented a summary of the leaders involved in the foundation and creation of the Blue Ridge Parkway, including President Franklin D. Roosevelt, Secretary of Interior Harold Ickes and landscape architect Stanley Abbott. However, Jones also highlighted leaders of the early Blue Ridge Parkway who she said held explicitly racist values such as Virginia senator Harry Byrd — who Jones said was a segregationist and white separatist — as well as Josephus Daniels, a white supremacist and segregationist. Jones added that Daniels was ultimately one of the leaders of the Wilmington Race Massacre in 1898 in which “2,000 white supremacists overthrew the local biracial government in Wilmington, NC, resulting in the murder of hundreds of Black people and the destruction of Black businesses.”

“When talking about African Americans and their use of the parkway, we have to talk about the risks of driving while Black,” said Jones. She stated that the “myth of the open road” was made for white people. “So much of American law is focused upon policing Black people and their movement in this country for the last 400 years, starting with slave patrols,” Jones said.

Foster spoke of her experiences as a child traveling on the parkway with her family. She said that “parents care about safety, they care about security and cleanliness,” and that when she and her family traveled these concerns were paramount in making sure her family made it safely to their destination. She added that her family would take into consideration “if we would even drive through the parkway to Roanoke in a way that would be clearly before dark.”

“They didn’t want us to suffer any indignities that we would have to contend with,” Foster said.

Looking for “oral history tidbits” from retired teachers she knows, Foster says she spoke to a lady in her 90s who lived in Richmond, Va., who said “the drive was too long” and that “there was no history relating to African Americans, so why would I go there?” Another retired educator who is almost 90 years old, Foster said, recalled that “during the era of segregation, people stayed in people’s homes” and could not “just easily stay in and camp out or go someplace, you needed to be in a place that was safe.” Ultimately, the man she interviewed emphasized the “anxiety about people’s security” when it came to traveling on the parkway during his youth.

Rogers shared her challenges growing up as a Black person in Appalachia, not from traveling through the Blue Ridge, but from living in an area of the Blue Ridge desegregating during her childhood. Growing up in Roanoke, Va., Rogers said that she was growing up just as the school system was beginning to integrate, so her kindergarten class was the first to go through all 12 years of schooling in a fully integrated system.

Growing up, “The mountains were comforting to us,” Rogers said of her family. She said that after church, her family spent Sunday afternoons at Mill Mountain, in the foothills of the Blue Ridge, and that they would “hike through the trails, or we’d go up north of the Roanoke Mountain and go down off by the way of the Roanoke River, and walk along in there (and) just be surrounded by all the trees.”

Despite growing up so close to the nature of the Blue Ridge, Rogers said that she never saw a park ranger until she went for her job interview to be a park ranger in 1984. It was reported in 1942 that less than one half of one percent of parkway visitors were African American, and Jones said that this caused African American visitors to the parkway to always be undercounted and not considered in the parkway’s planning. Rogers said she thinks park rangers hadn’t come across her and her family because her family was hardly in the area the rangers would have been.

Rogers was recruited to work for the Park Service in high school. When her high school teacher pitched her the job, Rogers said “Sure, I’d love to work on the parkway, where’s the parkway?” She said that she did not connect that the places she had been going all her life were part of a larger system.

Rogers said she was inspired by Reed Mosey, a colleague of hers who reminded her during a performance program that Rogers could “portray a woman of the mountains,” also known as a granny woman. However, Rogers said she thought she didn’t look like that character. Mosey asked her “Is your grandmother big, and round, and fat, and Black?”

From this moment, Rogers said she reflected on how she bought into the stereotypes of what somebody from Appalachia looks like, and in turn she has made her own program called Granny Foster Remembers, a composite character. Through this, she said, “I got the confidence to speak about my own past, my own present, and to open eyes, and my own eyes, to the rich heritage of the people who were part of the Black community.”

A participant asked the speakers how the histories, both told and untold, of the Blue Ridge Parkway influence how people interact with the space today. Rogers said that these stories help guide tourists where they plan to visit. “For example,” she said, “if you were promoting a story that is new or different, that’s one that they’re not familiar with, such as my story that I had with Granny Foster Remembers, and you put it out there, they may be curious to come to a campground such as Roanoke Mountain or go out to Pine Spur — that a way that it influences their visitation.” She said it is “hard to know what stories (visitors) will be interested in as you go along,” but that broadening the stories told can change the way one looks at the space.

One place Jones said the Blue Ridge Parkway could expand its stories including African Americans is at the historic Saunders farm. Jones said the Saunders sold their land, which included a homestead and houses for livestock, to the government for the parkway to be built on in 1942 for $2,000. A historic report was completed about the Saunders farm in 2005, said Jones, however, the pictures in the report document that there is no interpretive sign on the parkway for visitors to learn about the African American homesteaders’ experience.

Additionally, Jones said, the homestead is not accessible to tourists. Meanwhile, Jones stated that only a few miles down the parkway from the Saunders property is the Johnson family farm, a white owned homestead from the 1950s that was restored by the National Park Service in 1974. On site at the Johnson farm there are historical interpreters, and the farm is open to the public.

“This is an example of the erasure of Black history on the parkway,” Jones said.

Foster said, looking forward, she believes there is opportunity in asking “how do we develop this curiosity, and see what’s around and support what people are doing, and connect with each other to build relationships with people that we need to know?” She concluded, stating “All stories have power and significance, because we are all part of the humanity on Earth.”