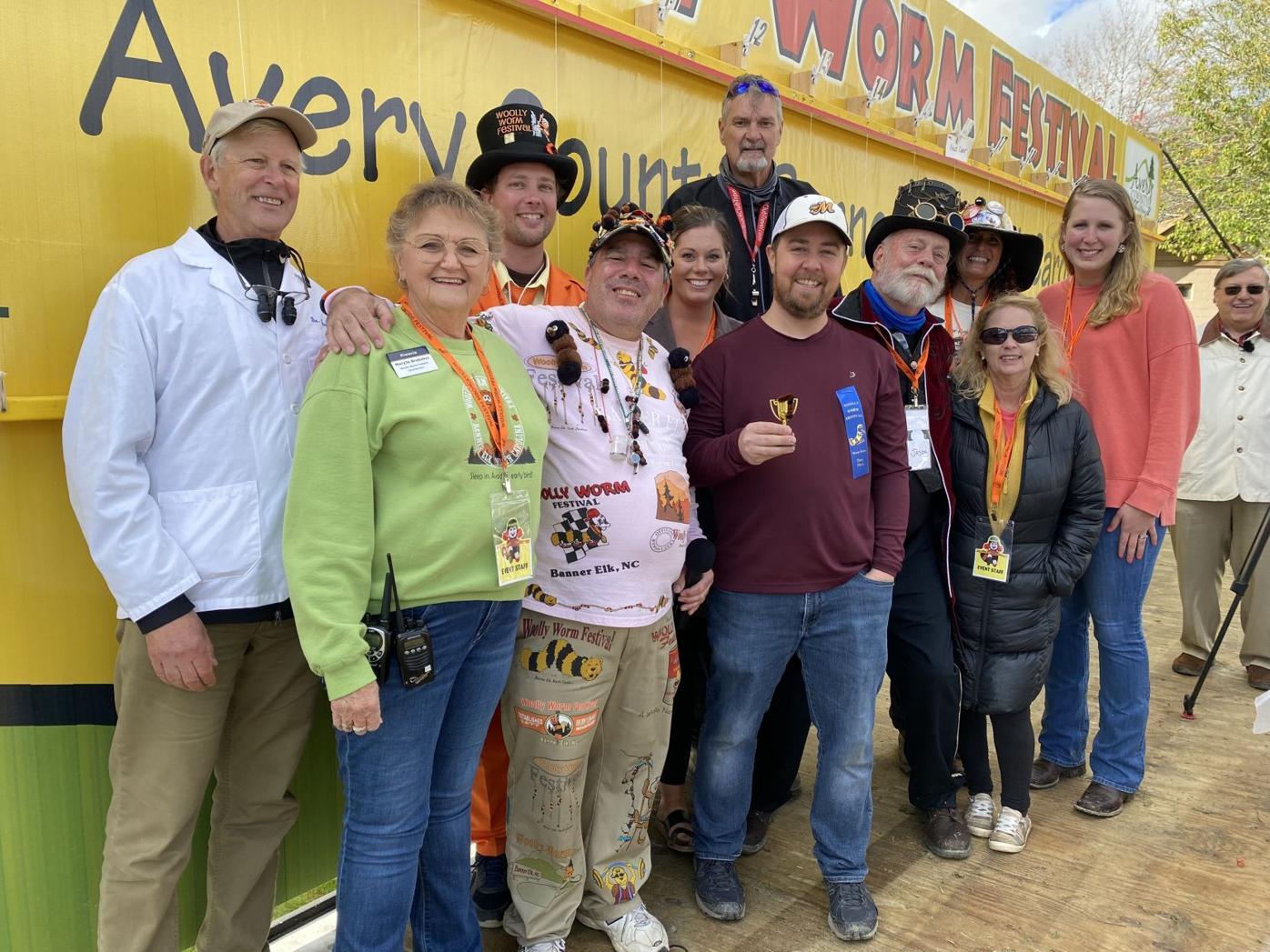 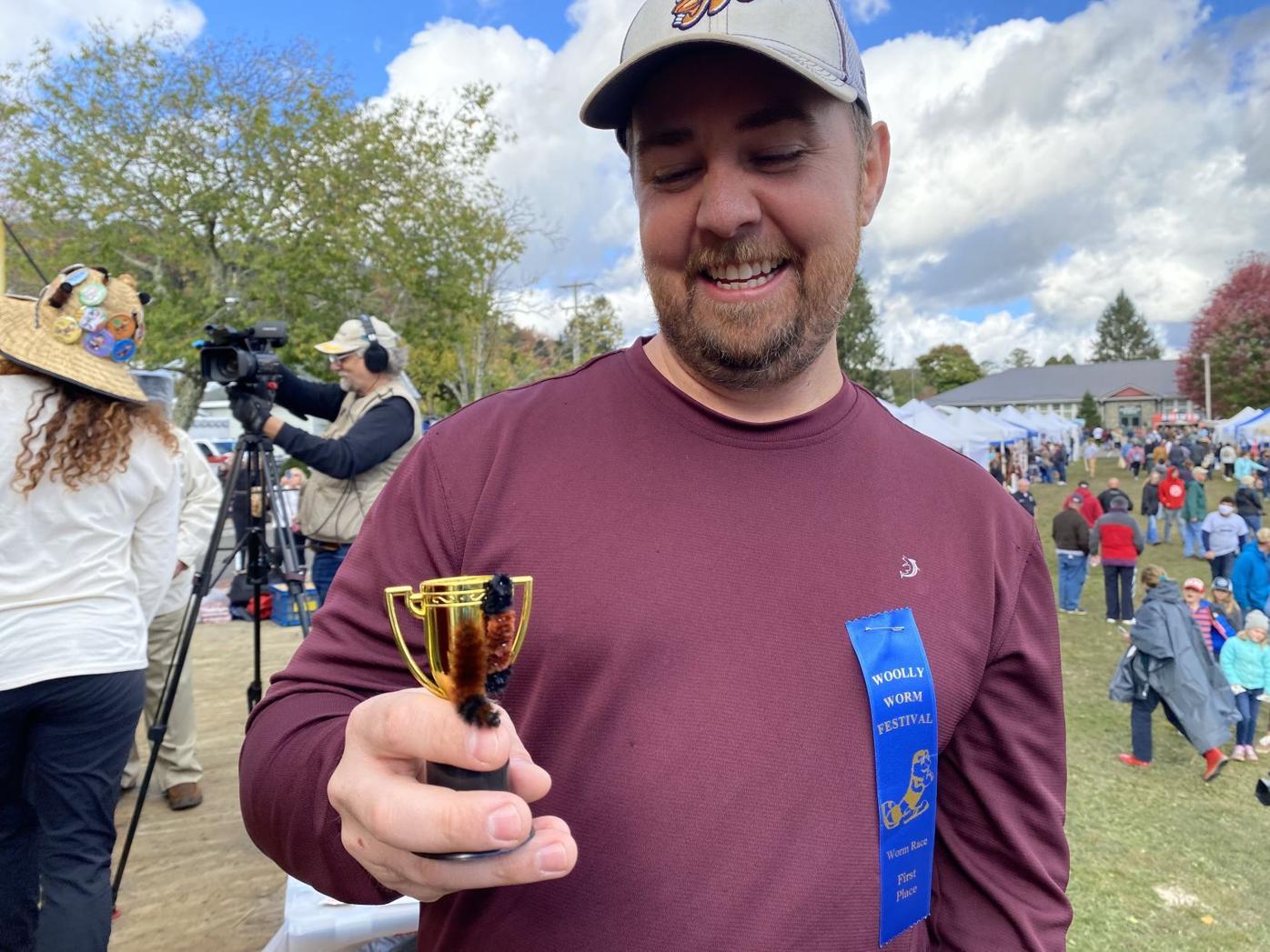 Eric Wood, who hails from Hickory, was convinced to attend the festival by his cousin from Taylorsville. Wood poses with his championship ribbon and trophy, along with his champion climbing woolly worm. The $1,000 cash grand prize was put away for safekeeping.

Eric Wood, who hails from Hickory, was convinced to attend the festival by his cousin from Taylorsville. Wood poses with his championship ribbon and trophy, along with his champion climbing woolly worm. The $1,000 cash grand prize was put away for safekeeping.

BANNER ELK — Despite uncharacteristically warm temperatures leading up to the festival weekend, Mother Nature flipped a switch to bring back typical fall weather, as a wet and damp beginning to the opening day of the 44th Annual Banner Elk Woolly Worm Festival on Saturday, Oct. 16, gave way to a cooler afternoon to close the first day and reign on Sunday to close the two days of activities.

Thousands of visitors flocked again to downtown Banner Elk on both Saturday and Sunday, Oct. 16 and 17, following a 2020 festival that was curtailed to a single race due to the Covid-19 pandemic.

With returning patrons came the other facets of the festival that attendees know and love, including the more than 150 arts and crafts vendors selling their wares to food vendors providing tantalizing aromas and palate satisfiers, with everything from doughnuts to barbecue available on offer.

Also present were various local organizations who pitched in to make the event take place, with efforts that ranged from raising funds through offering parking services near the festival grounds in town to the regular and repeated collection of trash throughout the weekend that accumulated on the festival grounds by longtime festival supporters the Civil Air Patrol.

“The event was awesome, despite the rain on Saturday,” Avery Chamber of Commerce Director Anne Winkleman said of the atmosphere, camaraderie and the success of the festival. “There was so much excitement up on the stage, and the weather didn’t slow anybody down. There was so much pent-up excitement.”

The stars of the weekend, and each festival for more than four decades now, are the woolly worms themselves, as they attempt to wiggle their way up a three-foot string for glory (and cash for the winning owners). Following an arduous day of racing, the last worm standing following dozens of quarterfinal and semifinal races over the day was owned/trained by Eric Wood, who took home the $1,000 grand prize.

Wood stated that he came to the festival thanks to a suggestion from a family member.

“I didn’t even think about it, what I would spend the money on when I bought a $2 worm. That’s like a 500 percent return on investment!” Wood said after the win and claiming the $1,000 in cold hard cash.

The festival boasted more than 150 Art and Craft Vendors, along with numerous food vendors, live entertainment, games and more. According to Winkelman, sales went well with many of the vendors on site, as well as with advance e-ticket sales, of which almost 1,200 tickets were sold prior to the festival, more than double the total sold in the festival’s first year of using the online ticketing service option in 2019.

“All of the vendors had an incredible sales event,” Winkelman said. “We had an amazing weekend. The food vendors did really well and had long lines. Even in the rain, we had numerous vendors who sold out. I was amazed with how many people braved the rain for this awesome event.”

An event to carry on for more than 40 years successfully depends on many people to form a team. Winkelman shared that this year’s festival was no exception, as numerous individuals, groups and organizations from various sectors were instrumental to bringing the festival back to what regular annual attendees are familiar with and enjoy, as well as providing the sort of first-time experience that new attendees will not soon forget.

“So many groups were important and made the event work so well. The Civil Air Patrol were fantastic. The Boy Scouts were great. We had the Ladies Auxiliary of the Banner Elk Fire Department who worked really hard. Cycle 4 Life, Doug Owen and his whole family all worked throughout the festival,” Winkelman explained. “My family, including my husband and I, my mom and my friend all were busy working. Mary Jo Brubaker did a fantastic job as we worked together in putting on the festival. She was awesome and also had all of her family working there. The FFA did a good job with us, and though we had less volunteers than we have had in past years, the ones who volunteered did an awesome job and double duty. Talia Freeman from Beech Mountain did a tremendous job, the educators sorority were fantastic, and the Avery High School Key Club were a great help. We can’t thank those folks enough, and many others, for what they did throughout the weekend.”

The trio of Adam Binder, Jason Dewitt and Shawn Stricklen served together in providing commentary during the races and as the general Masters of Ceremonies for the weekend, as several dozen heats of races were carried out in order to get to the grand champion at the conclusion of the day on Saturday afternoon.

Kiwanis Club of Banner Elk partners with the Avery Chamber each year to operate the festival weekend, and proceeds from the event are split between the two organizations. Kiwanis utilizes its funds toward the awarding of grants for area groups and organizations each year.

Doug Owen, President with the Banner Elk Kiwanis Club, was quick to offer praise for the execution of this year’s event after last year’s pared-down festival.

“It was great to see the festival in full swing again in 2021. It is our biggest fundraiser of the year and from the funds we are able to generate Kiwanis gives back to the community through grants,” Owen said. “Anne from the Chamber is a real go-getter, and with this being her first festival, she did a fantastic job. She set up a live phone call with The Weather Channel on Sunday morning. The vendors all seemed happy with their sales, even with the Saturday rain. Many of us feel that is was our biggest Sunday in a long time.”

Following the festival, Owen and a number of others organized a release of the worms that were used from the event back into a natural habitat around Banner Elk to live out their days before eventually metamorphosing into the Isabella tiger moth.

“For me the official worm release after the festival was extra special,” Owen added.

For patron and organizer alike, the Woolly Worm Festival was a welcome sight for sore eyes, a hopeful harbinger that normalcy beyond the previous 18 months may be on the horizon.

“Every person I spoke to, customers and vendors, were so excited to be out. They felt safe there, and there was no frustrations by anyone. More than five vendors told me that this was the most money they had made at any festival they had been to all year,” Winkelman explained. “Two things I’ll remember from the festival are the long doughnut lines and the long line to get shirts from Don Iverson’s booth. Those were the most popular places. We all had such a good time this weekend.”

By virtue of its victory in the championship race at the 2021 Banner Elk Woolly Worm Festival, the winning worm predicts the upcoming 13 weeks of winter weather by virtue of the colors or shades of the 13 worm segments, each representing a week of winter. This year's victorious worm was owned by Eric Wood of Taylorsville.