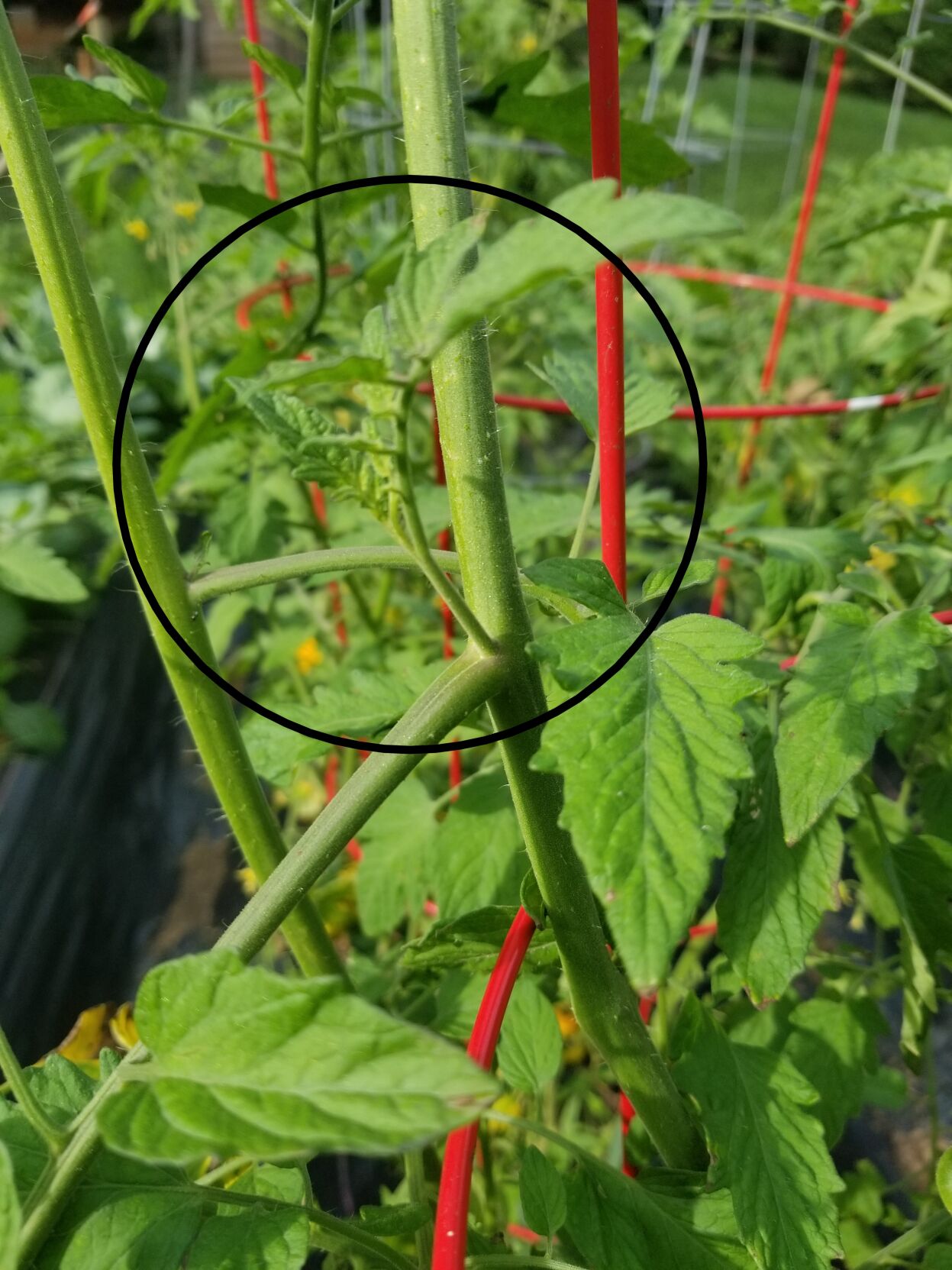 An example sucker shoot that would be targeted for pruning if it doesn’t protect the fruit below from sunscald. 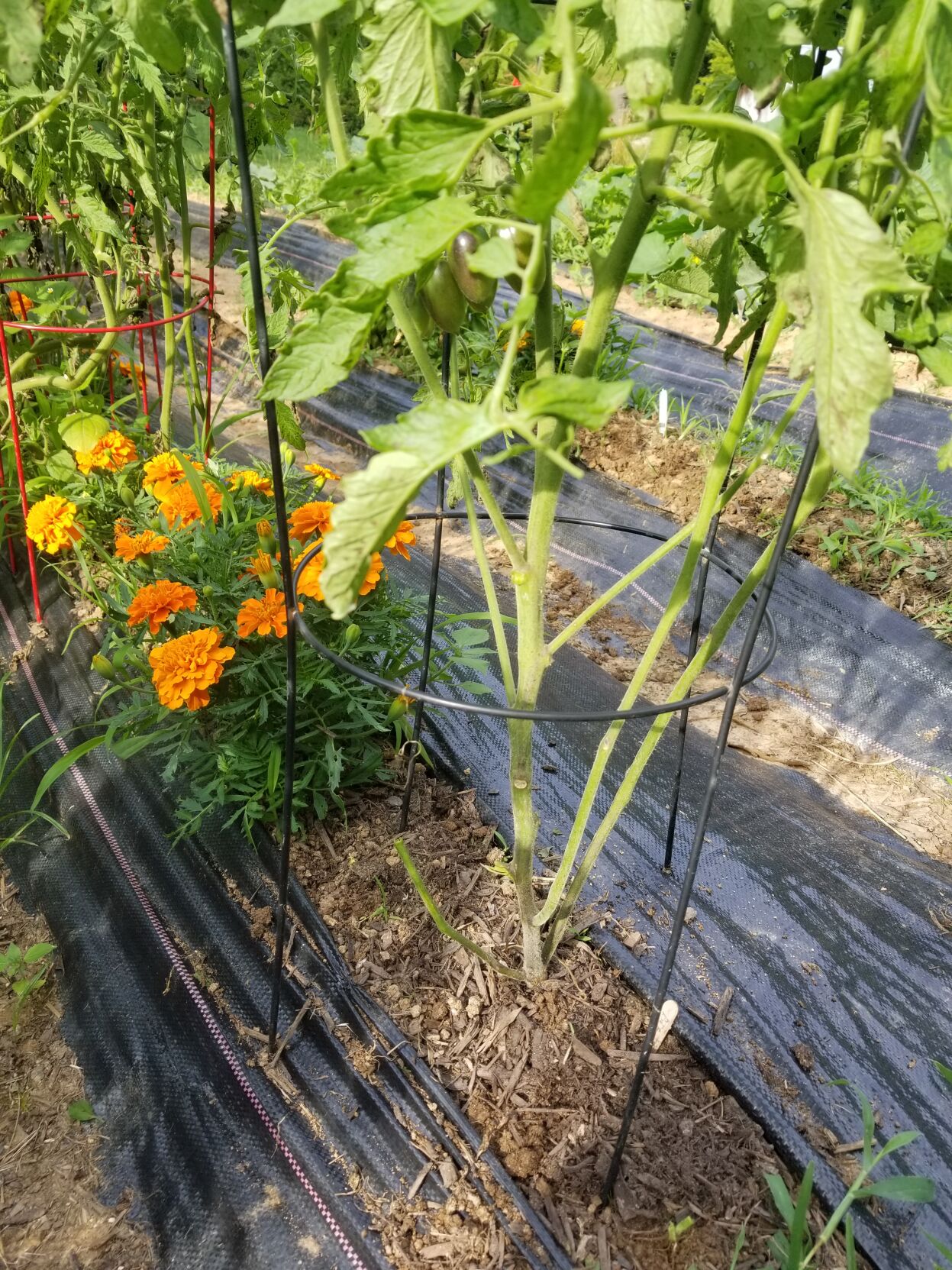 The bottoms of the plants are pruned early in the season to prevent leaves from laying on the ground in the mud after a rain or good watering.

I was not a tomato-pruning gardener until the year I had a terrible harvest, losing most of my plants to disease. After some research to prevent this massive crop failure the next year, pruning has become my go-to, keeping leaves off the ground and improving air flow around the plants.

Before grabbing the clean shears and jumping in, there are a few points to consider. There are some plants that can only be pruned along the bottom and early in the season, or you could cut off the stalks that produce the fruit.

Determinate tomatoes are varieties that grow to a certain height and stop. The fruit on these varieties tend to all ripen at once and appear at the end of the branches. Great for large crops at once for canning or sauce. Determinate tomatoes should not be pruned except along the lower few inches of growth early in the season. Bush plants and patio varieties are more likely determinate plants.

Indeterminate varieties continue to grow throughout the season and produce fruit all along the stems. These are the plants that can exceed five feet tall and need much more support and more pruning. Think most cherry tomatoes and heirloom varieties.

Removing the suckers, the small shoots and leaves that branch out from where the stem meets the branch, will help these indeterminate varieties dry faster after rain to prevent disease from too much moisture. These suckers also pull away all the growing energy and plant food away from your big stems and fruit production. You are looking for shoots that are one-quarter- to one-half-inch in diameter. If you catch them early, no shears needed, the suckers will simply pinch off.

Not all suckers are bad suckers. I leave some, selectively improving air flow while leaving some leafy shoots to protect the fruit from sunscald. Basically a sunburn on your fruit, sunscald starts as a yellow patch from hot, direct sunlight that will turn grayish with a papery feel.

I also take all the small stems and leaves off the bottom 3 to 4 inches of my tomato plants to prevent the splash back when watering or from a heavy rain. Keep the leaves off the ground where they will lay and potentially rot and spread rot to the plant.

I err on the side of less pruning is better. I leave more suckers than I take because my garden plot is full sun and I’m more worried about sunscald than air flow. As I was first learning and researching about pruning, I took so little off it was hard to tell I had done anything. I stick with that recommendation.

You can’t put it back once you have pinched off the suckers or the bottoms, and too much pruning can kill a tomato plant or prevent fruit from forming at all on a determinate plant. Know your varieties before you start pinching and pruning.

Melanie as a born-again Hillbetty attempting to revive her Appalachian roots. She lives in Creston with her two dogs and 21 chickens.