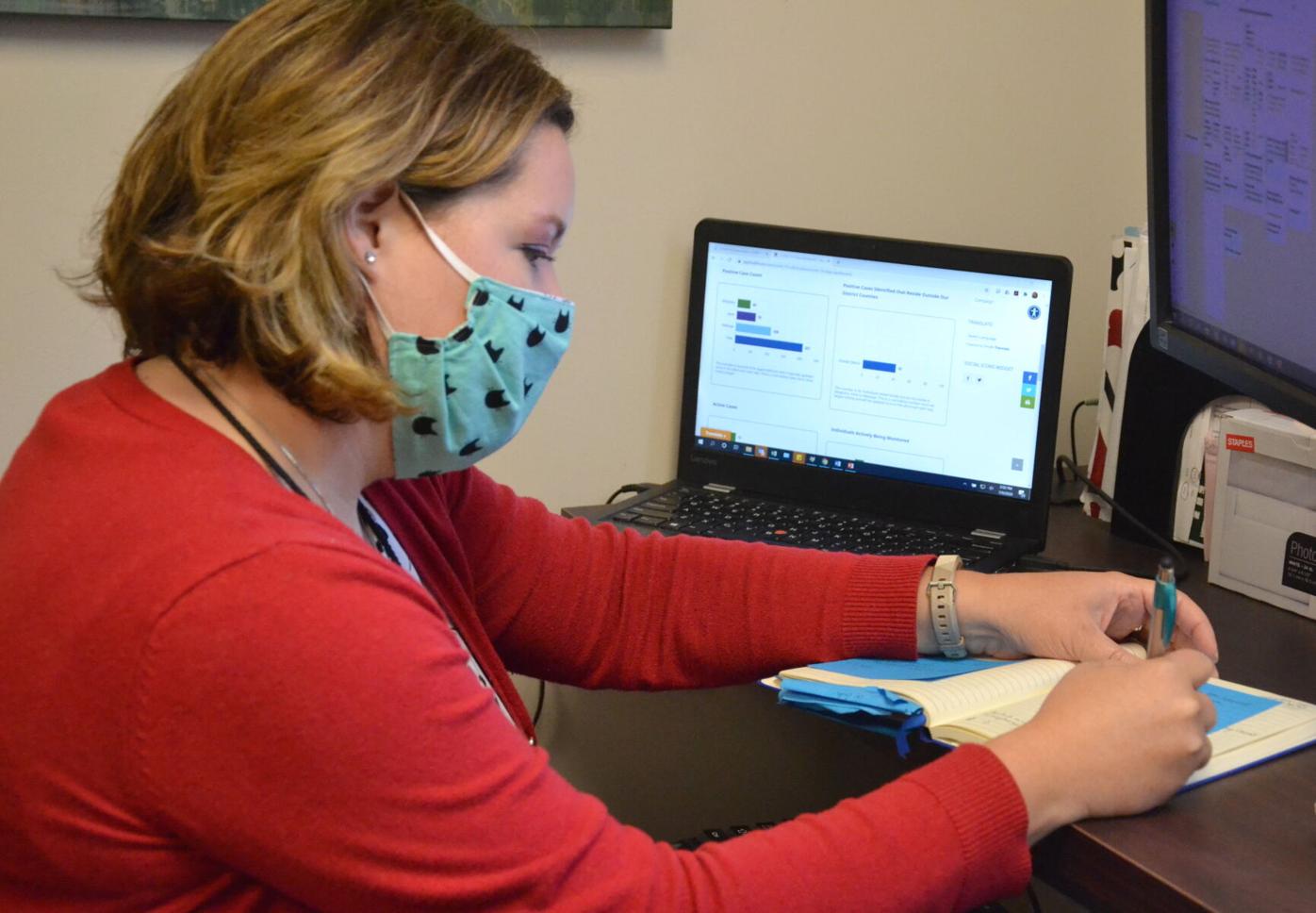 Jennifer Greene spends much of her days researching and studying data and conducting Zoom meetings and phone calls with community partner groups and elected officials. 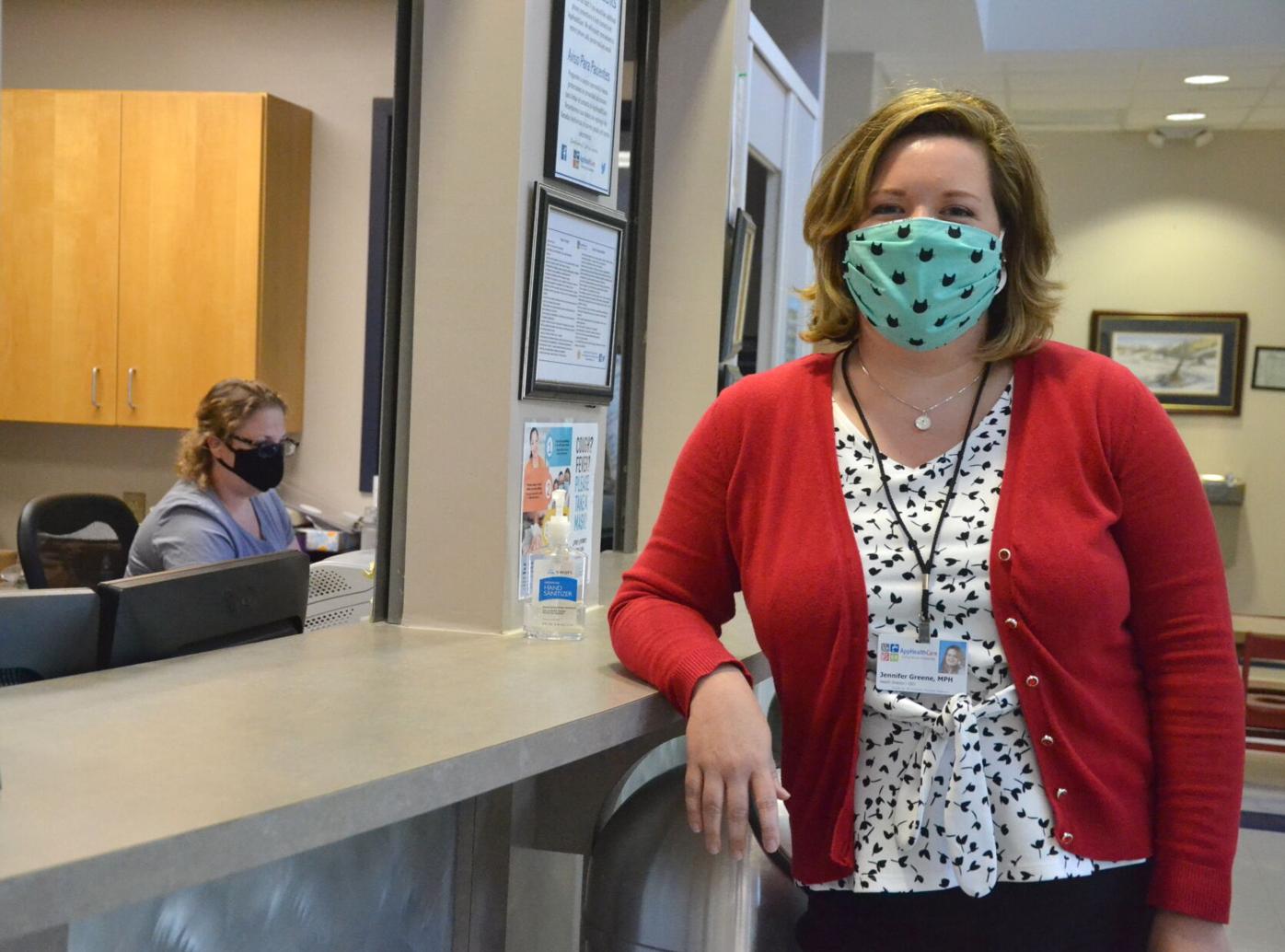 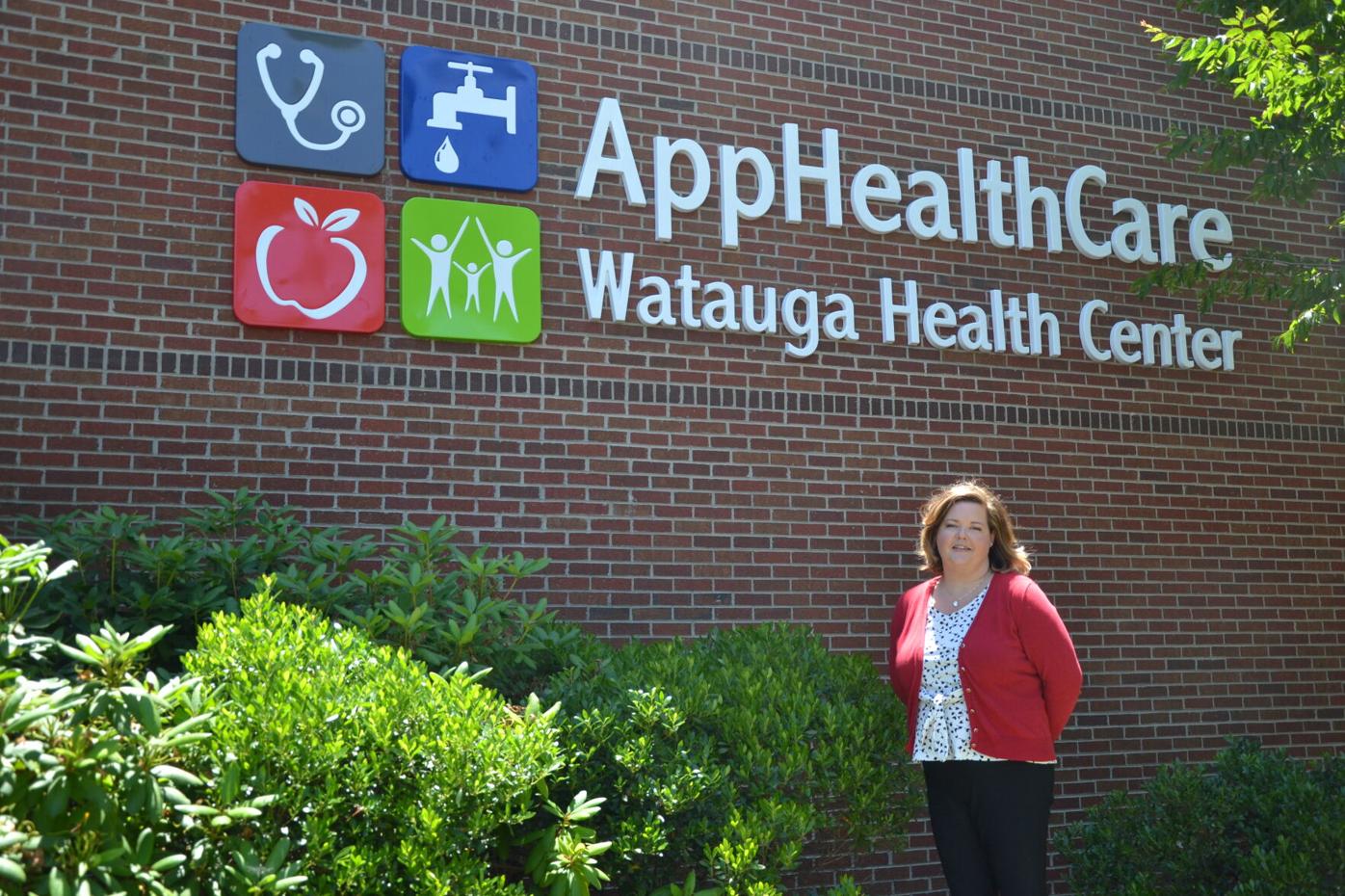 AppHealthCare's Watauga Health Center is located on the Poplar Grove Connector in Boone. 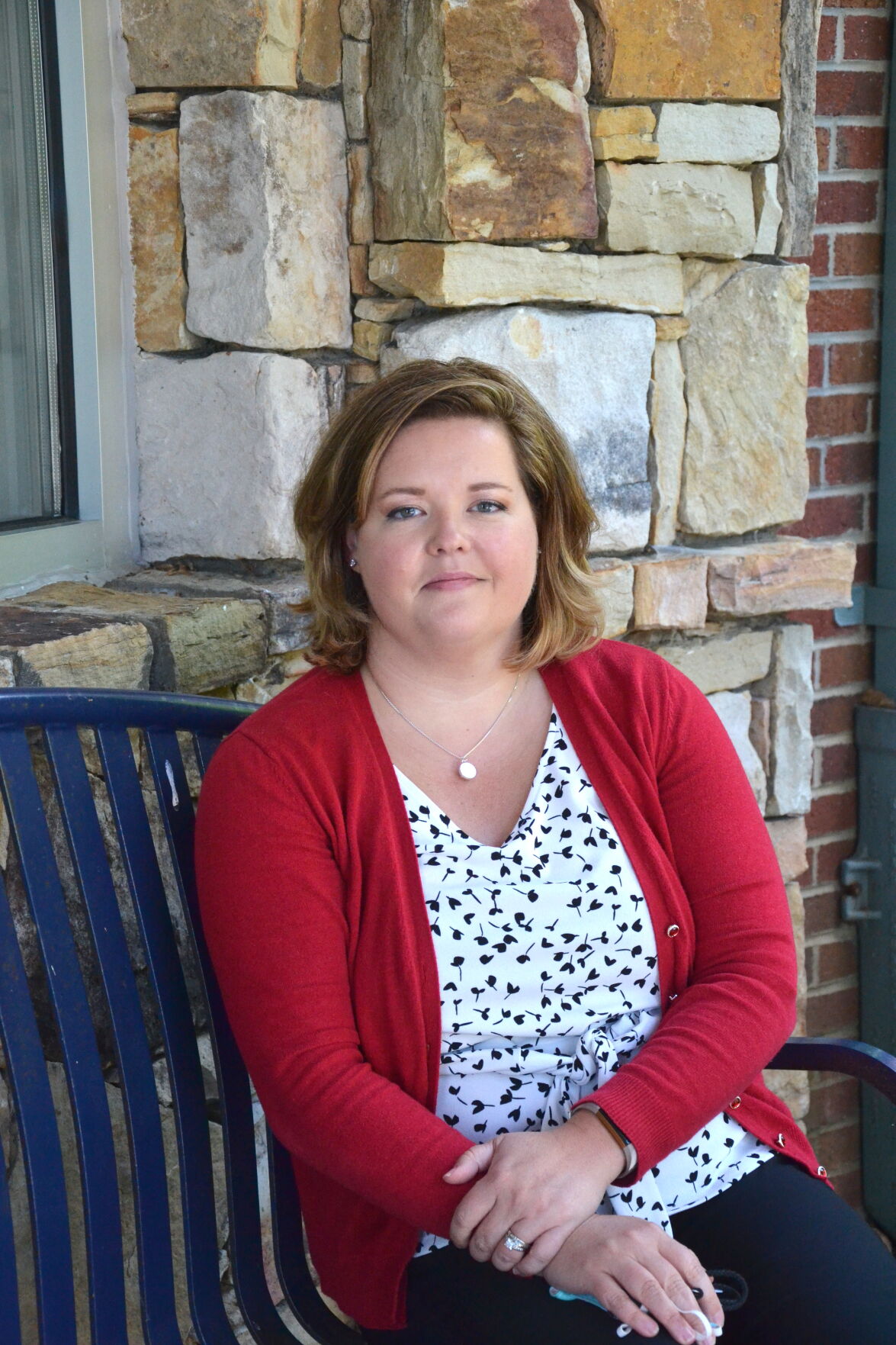 Jen moved with her family to Watauga from Durham when she was 5, and is a graduate of Watauga High School. She chose to go into the public health field because she wanted to work in a career that could positively impact people while making a difference in the community she loves.

When Jen Greene entered the public health field, she never thought she would be confronted with an issue of the magnitude of the COVID-19 pandemic.

“This is the longest response we’ve ever been in,” Jen says. “I know people are tired. We know we have a long way to go, but we need to lean into supporting each other.”

During the pandemic response, Jen says the AppHealthCare leadership team participates in a daily huddle to plan response efforts and to troubleshoot different issues. The rest of her day is packed with research and study of data and conducting Zoom meetings and phone calls with community partner groups and elected officials. She estimated that she met with 12 groups or so regularly to discuss the pandemic response and answer questions that locals may have.

Jen also participates in a statewide contact tracing team that meets routinely throughout the week. She says the team is a collaborative group of representatives helping to inform the N.C. Department of Health and Human Services on contact tracing response for COVID-19.

Jen and her staff on average have worked more than 50 hours a week during the pandemic. She says the agency is trying to give its frontline staff a day off if they have to work during the weekend.

“Some staff have been working consistently,” Jen says. “I hope it’ll get better soon since we now have some funds to hire more people to assist.”

Boone Area Chamber of Commerce President and CEO David Jackson said the last few months have certainly put more spotlight on Jen and the AppHealthCare team. He says the agency’s staff has been proactive in seeking ways to find answers to the difficult questions the community has faced.

“As we brought things to (Jen) about business operations very early in the response, she was eager to do the best she could to provide help, knowing people were dealing with unforeseen challenges and obstacles,” David says. “It's clear she cares deeply about the community she serves, and the compassion and empathy shown by her and her team have helped knock the edge off some difficult conversations.”

Serving as “the public face of the pandemic response,” David says Jen has taken sharp — and many times unwarranted — criticism from pandemic naysayers. It is in those times he says Jen conducts her best work. She uses knowledge, grace and strength to communicate effectively while using science, data and her training to guide her to make the best decisions for the community, David says.

“When people are fearful and anxious, they tend to overreact. Jen can see past the emotions of the situation and focus on the message and ultimately the resolution to the challenges we face,” David says.

According to Watauga County Schools Superintendent Scott Elliott, Jen has been a unifier among leaders by keeping officials informed and by being focused on facts and tangible actions.

“Jen's steady and professional demeanor has been a calming force across our community throughout all the uncertainty and chaos of the last few months,” Scott says. “She's down to earth, professional and helps put people at ease. We’ve also seen several very public examples of her calm nerves and strong backbone.”

Jen moved with her family to Watauga from Durham when she was 5, and is a graduate of Watauga High School. She chose to go into the public health field because she wanted to work in a career that could positively impact people while making a difference in the community she loves. She also says she wants to protect and support people in the community who are often forgotten.

Her decision to make public health her career path was made with her daughter in mind. Jen became a mother to her daughter Celeste between her junior and senior years in high school. Her daughter played a major influence in her life, and Jen says she chose to work in public health because she wanted her daughter “to have the best opportunity for a healthy life.” She is also the mom to 12-year-old Green Valley student Logan with her husband Anthony.

Jen graduated with her bachelor’s degree in health promotion from Appalachian State University in 2004, and gained her master’s of public health from Des Moines University Osteopathic Medical School in 2016. Her daughter went on to also obtain a public health degree from App State in fall 2019.

Jen began her career at AppHealthCare in June 2004, when the organization was then known as the Appalachian District Health Department. Through the years she worked her way through the positions of a health educator, a health promotion supervisor and then allied health services director. She became the agency’s deputy health director in January 2016, and then the official health director in December 2017.

While the pandemic has highlighted the need for public health, Jen says there are 74 or so other reportable illnesses for which AppHealthCare conducts the same type of work.

“Public health is everywhere, every day for everybody,” Jen says. “There’s no time that we’ve really seen that demonstrated more.”

Finding it important to always be available when needed, Jen says her phone is ringing often these days.

“Sometimes a quick decision is needed — that can happen at night, it could happen on a weekend,” Jen says. “It’s part of what we do.”

But she credits her AppHealthCare team for carrying a lot of the load of phone calls at the office. She said having a great team and community behind her helps to keep her going.

Her faith in God is one of the main aspects that have kept her sane through the pandemic, she says. She says she’s had to realize that there’s so much out of her control, and that she has to trust that God has the situation. Additionally, she’s been trying to get outside more and spend time with family to do activities like cornhole. As another outlet, Jen uses her exercise bike to try to burn off stress.

Jen says self care is important, especially during this time, as she knows mental health is not always prioritized. She advised community members can improve their mental health by just taking five minutes to breathe. She encouraged the community to try reaching out to those they care about. Jen says it's been helpful for her to have a friend group of other health directors who understand her stresses.

Ultimately, Jen says the pandemic has reminded her how important it is to have a strong team — not just within AppHealthCare but also in the community. She says she hopes the community will come together to try to preserve the unity she has seen it demonstrate.

“We may all have differing opinions, but if we can come together and try to reiterate that unity, we will make it through,” Jen said.