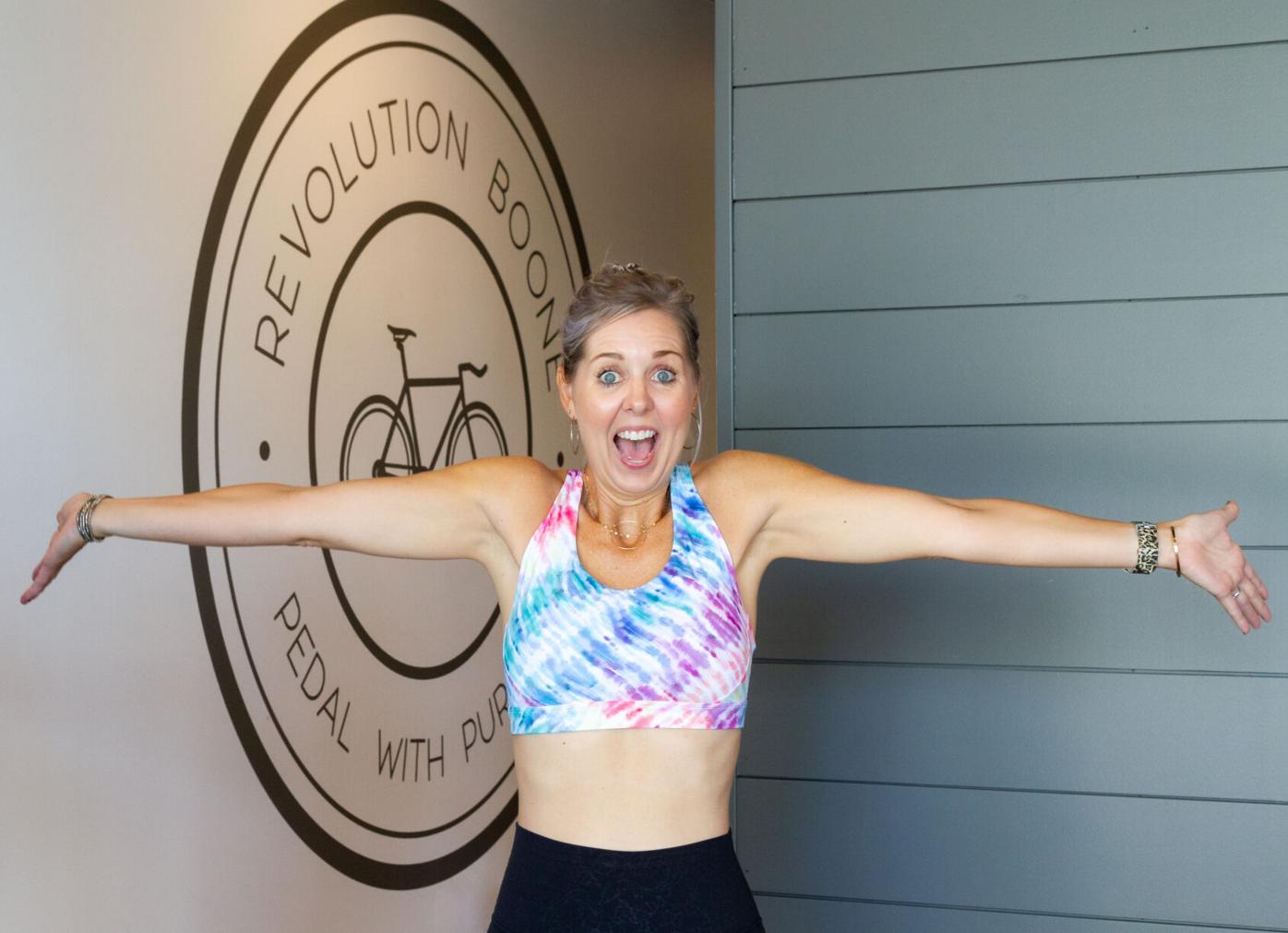 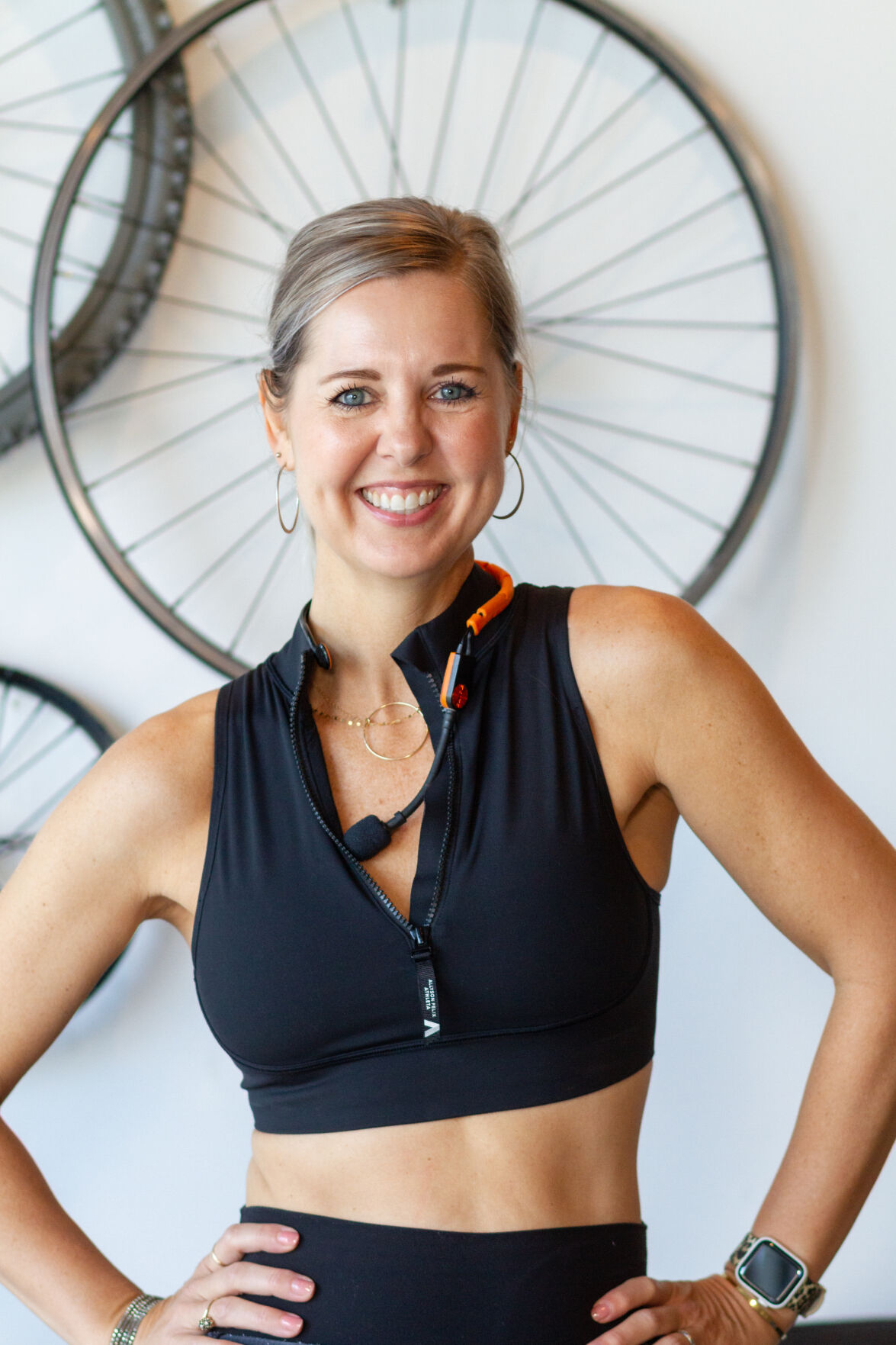 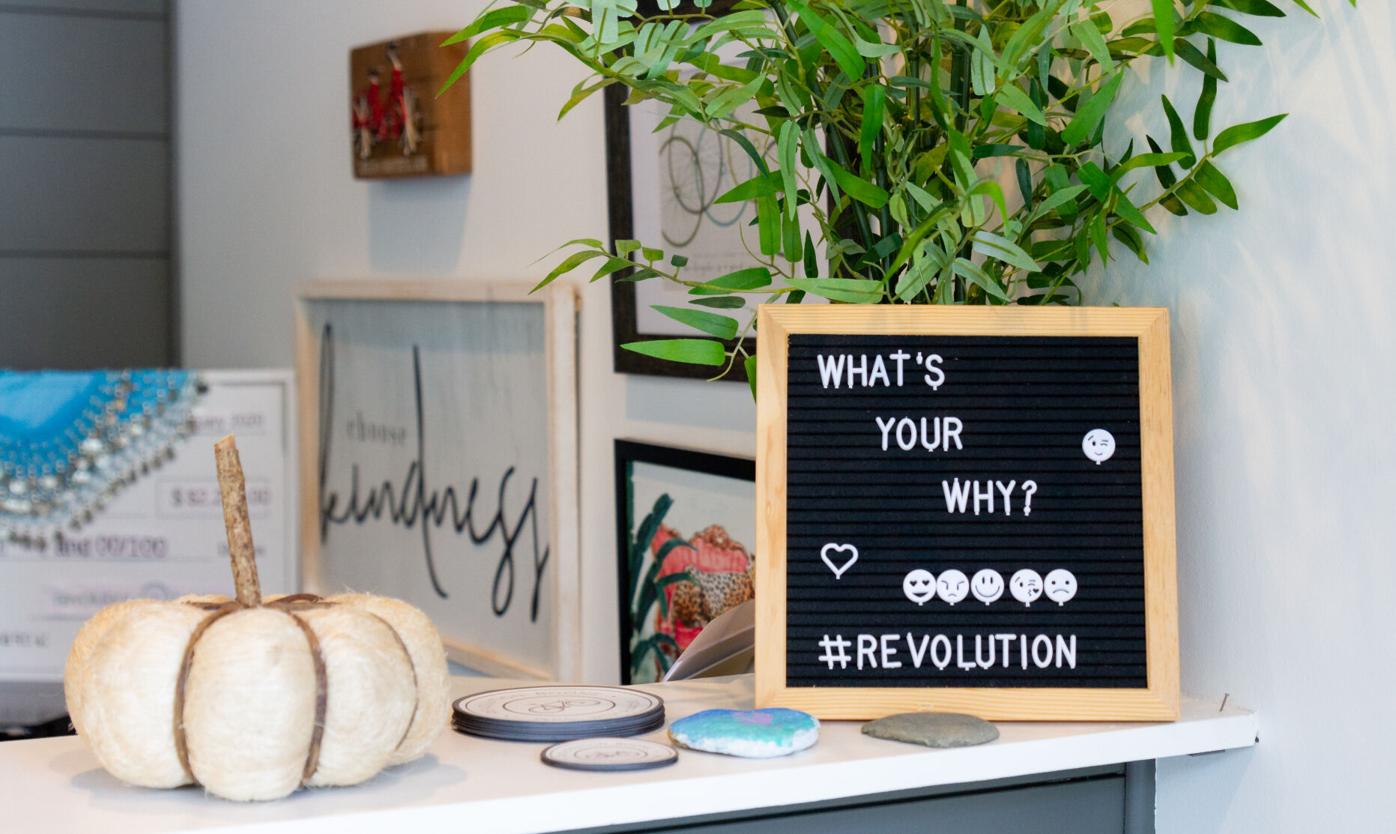 Staff at Revolution Boone strive to motivate and uplift clients. 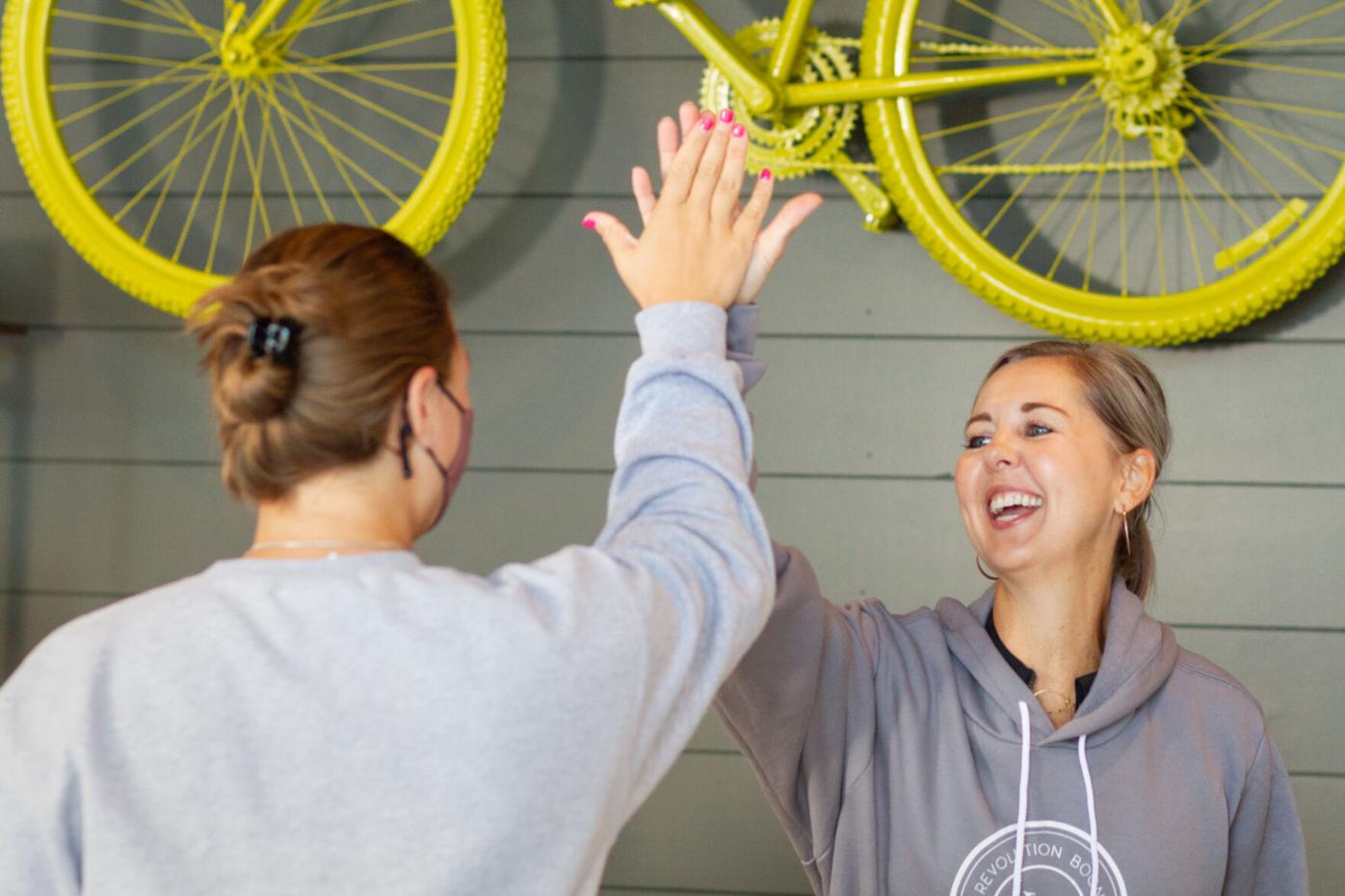 Greyson Summey wants to foster a sense of community at Revolution Boone. 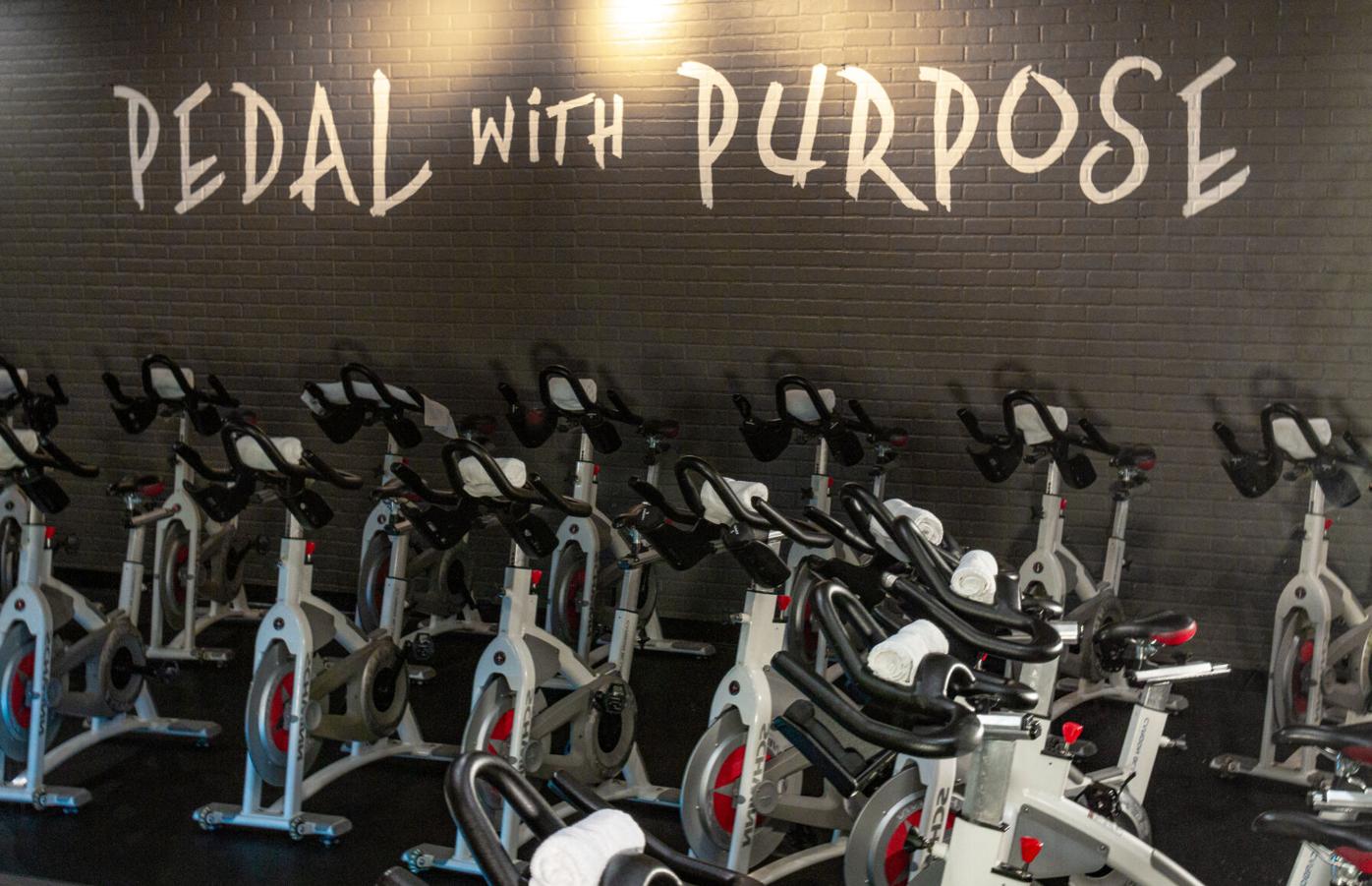 Revolution Boone regularly picks local organizations to donate to in an effort to pedal with purpose.

Staff at Revolution Boone strive to motivate and uplift clients.

Greyson Summey wants to foster a sense of community at Revolution Boone.

Revolution Boone regularly picks local organizations to donate to in an effort to pedal with purpose.

The cycling studio’s music was loud. The lights were down, and colors of red, blue and pink switched on and off to the beat of songs playing over the speakers. Participants' legs burned as they pedaled back and forth on their bikes and pushed themselves to finish the ride.

In front, Greyson Summey shouted encouraging words from atop her bike, which was stationed on the platform she built herself. Behind the riders on the wall were large backward white letters, that when they looked in the mirror while riding, it spelled “Pedal with Purpose.” She painted those too.

Greyson’s labors of love surrounded the cyclers as they finished their ride. Every detail, from the type of bike to the signs on the wall to the lights in the room, was handpicked by Greyson.

As the owner of Revolution Boone, a cycling studio in Boone’s Watauga Village, Greyson uses her studio to uplift and encourage those who ride there.

“I've always been just kind of that cheerleader in the background. That's kind of been my thing,” Greyson says.

However, Greyson's journey with fitness began way before she opened Revolution Boone in 2019. First, Greyson was a teacher.

Born and raised in North Carolina, Greyson earned her teaching degree from the University of North Carolina at Chapel Hill, and afterward, she taught in Morganton, NC, and even out of state in Tennessee and Philadelphia.

While teaching, Greyson maintained her love of group fitness and working out, teaching fitness classes like spin and sculpt.

“Fitness was always kind of my side hustle,” Greyson says. “I was so poor, to get free gym membership, I would teach classes.”

After her time in Philadelphia, Greyson and her husband moved to Boone to be closer to their family in North Carolina. Back in her home state, she decided not to take a teaching job but rather took on to what she considers her “one full-time job,” which was being a mom.

With two kids, Greyson decided to become a stay-at-home mom. However, Greyson felt she wasn’t done with working and felt that she was called to serve again.

“Service has always been a passion of mine, so in all aspects of my life, always service,” Greyson says.

While on her personal bike at home one day, Greyson decided she wanted to share spin with others and open a spin studio, but similar to the feeling she got while teaching, she wanted her next venture to fill her with purpose.

“I wanted whatever I did next to have purpose, and I wanted to have intention doing it,” Greyson says.

She then embarked on a journey to build her business, visiting other studios to find out what she wanted to incorporate in her own studio. While exploring her options, one word kept nagging her over and over again — the word purpose.

“And I was like, ‘That's what we're gonna do. We’re gonna pedal for ourselves, and then we're going to pedal for others,’ and then pedal with purpose kind of became the thing,” Greyson says.

Every month the studio chooses a local nonprofit to donate a portion of the gym's profits to. Greyson picks a "purpose of the month" through suggestions that cyclers can add to a large white jar on the front desk. Past recipients include the Hospitality House, the Hunger and Health Coalition, OASIS, Western Youth Network and F.A.R.M. Cafe, with each donation celebrated with a photo on the gym's wall.

For Greyson, pedaling with purpose meant giving back through her studio to charitable organizations and those who need it. That’s where she said the birth of Revolution Boone came from, her desire to share fitness, purpose and service with others.

From there, she says there was no turning back. With no other studio in Boone dedicated to cycling, Revolution Boone was the first of its kind away from the group fitness classes offered by Appalachian State University or local gyms.

With no business experience, Greyson went into building the studio from the ground up, figuring out what she wanted it to look like and what she wanted it to stand for. After finding a retail space that would function well for everyone with accommodations for parking and space for her bikes, Greyson began the remodeling, which included contracting the whole thing by herself.

“It is the scariest and most vulnerable thing I've ever done in my life,” Greyson says. “Putting yourself out there, and then you have to see if people are going to show up. I mean, that was so scary.”

After signing the lease for the building in May, Revolution Boone officially opened Sept. 23, 2019, after weeks of nervous sleepless nights for Greyson. However, it was only open for five months before the COVID-19 pandemic forced them to close.

“That was just devastating,” Greyson says.

Although crushed by the sudden closure of her new business, Greyson stayed hopeful after the successful five months the business had. In those months, Revolution Boone was able to give $10,000 back to the community.

After a six-month closure, Revolution Boone reopened in August 2020 with safety precautions and the hope that the business could stay open. Greyson also hopes Revolution Boone can return to giving back after she had to pause donations due to the financial strain of the pandemic closure.

Now back open, cyclists filter in and out of the studio, stopping to chat, taking pictures after their completed workout and celebrating their accomplishments with Greyson. Oftentimes, celebrations occur after rides when Greyson and the studio celebrated the 100th, 250th and the 300th ride of those at the studio.

“You’re never going to come here and not smile and not feel welcome, and that was my number one thing about opening this business,” Greyson says.

Not only did she want people to get a good workout at the gym, but she also wanted the gym to feel inclusive and welcoming to everyone.

Sherry Nikbakht, a senior lecturer at Appalachian State, joined Revolution Boone last fall, looking for a place to exercise and focus on her mental and physical health after the North Carolina governor allowed gyms to reopen.

“I’d never done spin before in my life, and the very first class was kind of hard,” Sherry says. “But then I fell in love with Revolution Boone, not just because of the physical aspect of it but also because I feel like I found a community.”

Sherry says Revolution Boone gave her a safe place to be herself and somewhere she could feel comfortable. As the university returned to in-person classes in early September, Sherry also says the studio has helped her work out her anxieties around returning to class amid the ongoing COVID-19 pandemic.

While she says she has her own insecurities, Sherry adds that she enjoys the sense of belonging to a community at Revolution Boone.

“I think (it’s) because everything (Greyson) does comes from a place of love. She’s so inclusive,” Sherry says.

Though nervous at first to open something so new to Boone, Greyson said the community at the studio is so important to her, and she hopes to continue Revolution Boone’s service while fostering that community she loves so much at the studio.

“I kind of don't know what I'm doing. I just do what feels right,” Greyson says. “I want my kids to see me doing something that's making an impact. I think that's very important.”