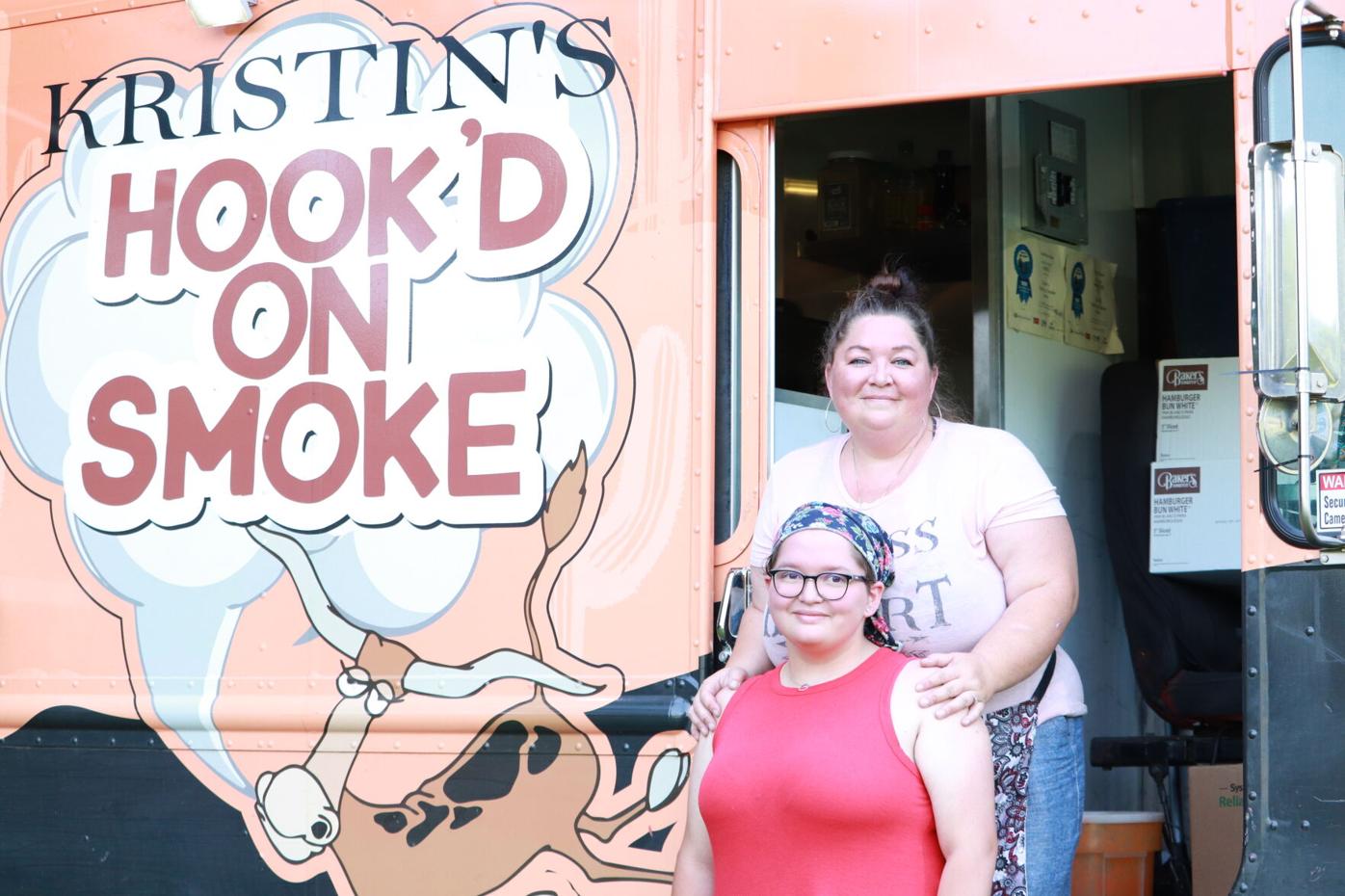 Kristin Howell and daughter Whitley prepare food at Ashe County Park for the area's Friday in the Park event. 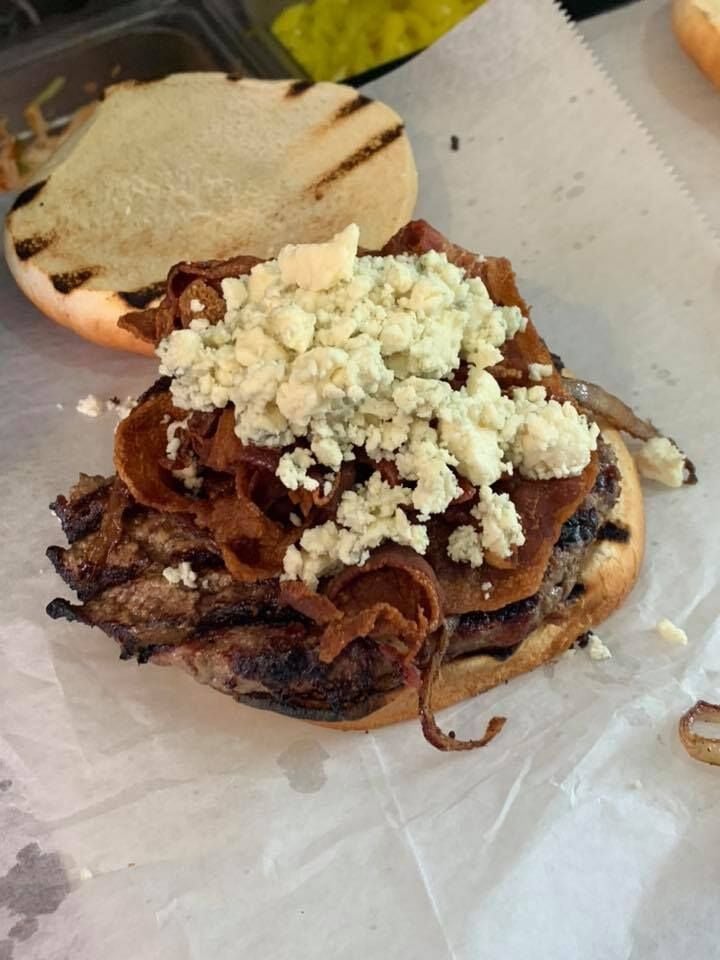 A popular menu item offered at the food truck are hand-pattied burgers. 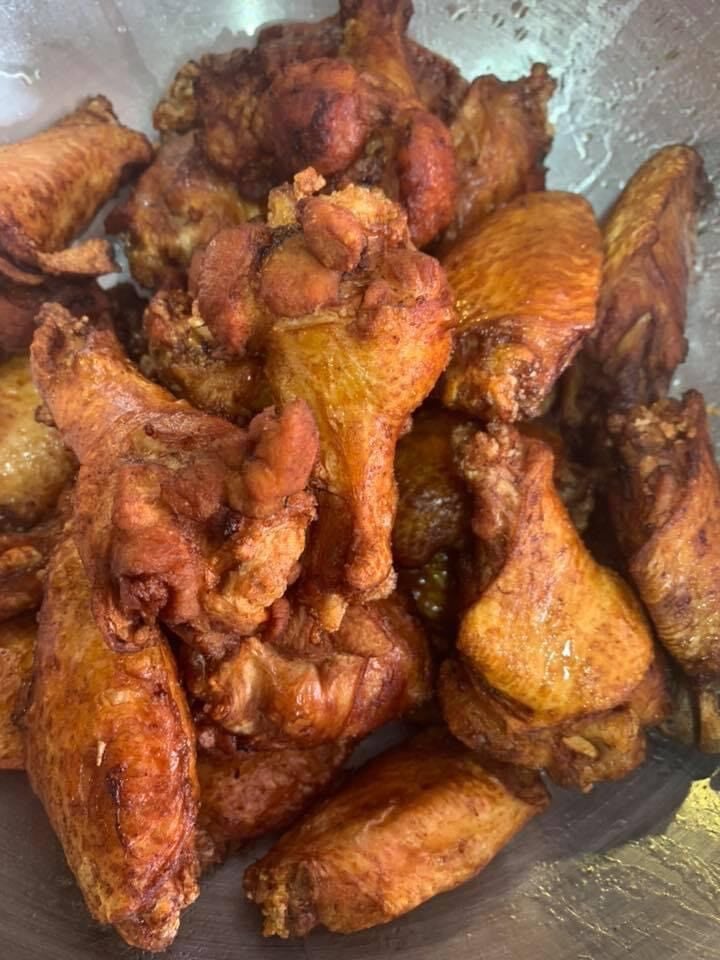 One of Kristin's favorite items to make for the food truck are her "messed up" wings. 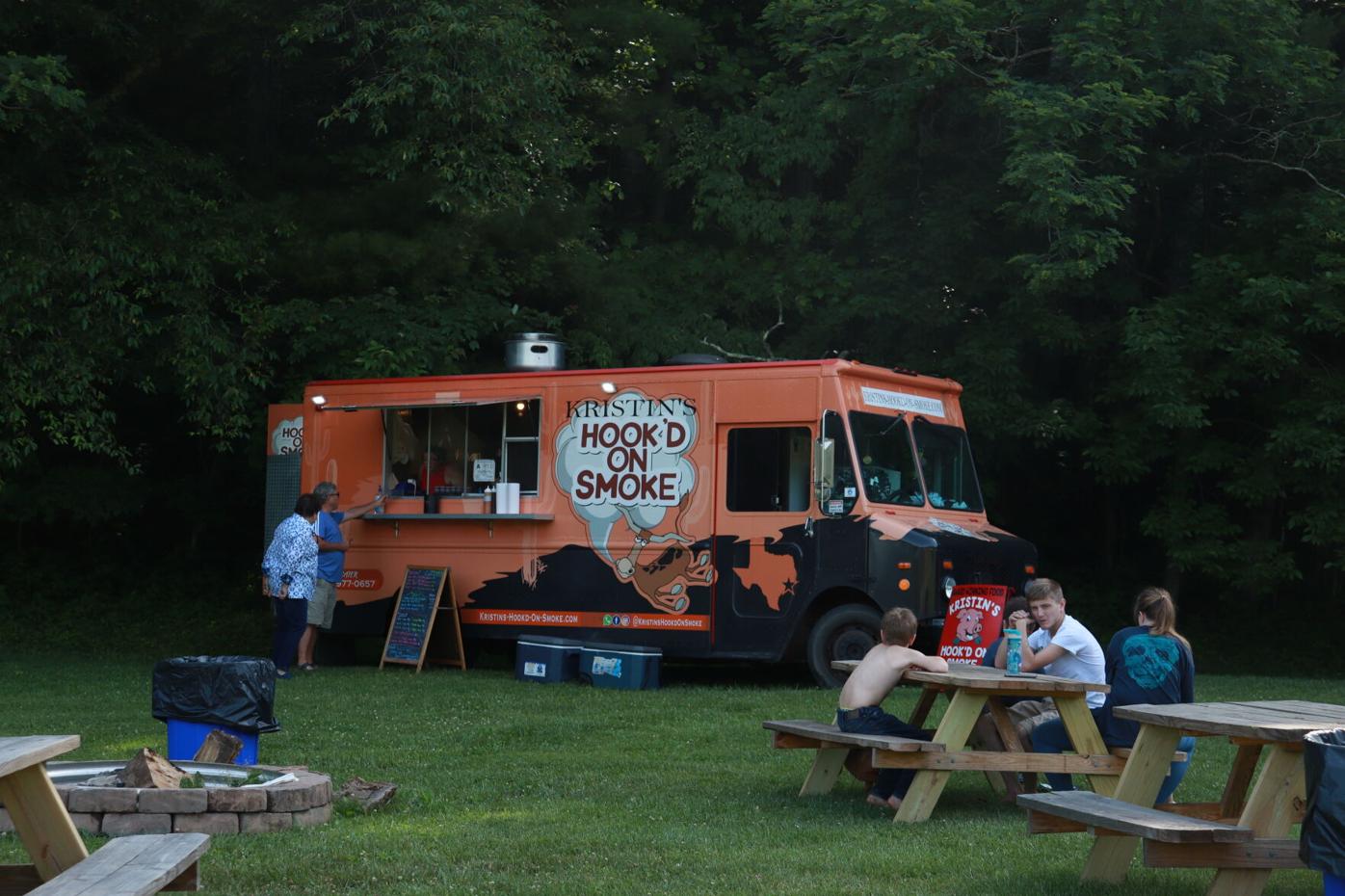 Kristin Howell and daughter Whitley prepare food at Ashe County Park for the area's Friday in the Park event.

A popular menu item offered at the food truck are hand-pattied burgers.

One of Kristin's favorite items to make for the food truck are her "messed up" wings.

In Ashe County, a bright orange truck offers award-winning barbecue, hospitality and is praised by both locals and visitors to the area. Kristin’s Hook’d on Smoke food truck can be spotted on weekdays in downtown West Jefferson and at festivals and events throughout the year.

“Feeding faces” and making a name for herself over the years as a mouthy, barbecue connoisseur is owner Kristin Howell.

The path which led her to this place in her life — which she said is the happiest she has been —was not an easy one, with several bumps and setbacks. However, she did not give up when “the going got tough” and says joining the food truck industry was the best decision she ever made.

She was introduced to the food industry at a young age because her mother’s family owned and started Shatley Springs Restaurant in Crumpler.

“I started off underneath biscuit tables watching my great-grandma,” she says. “And I was there all the time because my mom worked all the time.”

She soon began waiting tables, which suited her well because she is so personable. Since she was chatty and took the time to get to know the customers, she made a good living as a waitress.

In her 20s she opened up a restaurant called the Whistle Jacket Grille for a man living in Eden. She returned to Ashe County while pregnant with her daughter, Whitley.

As a single mother, she had to work multiple jobs in order to stay afloat, including waitressing jobs at several local restaurants in addition to cleaning and pressure washing houses. Local business owner, Mike Aloia, contacted her one day to offer her a fresh start as the owner and operator of When Pigs Fly restaurant. She took over the restaurant in July 2013.

“I didn’t know anything about the barbecue business,” she says.

Within the first six months, she was turning a profit at the restaurant, which previously didn’t experience much business. One of the contributing factors of its newfound success was that many of her regulars that she met through her other jobs over the decades followed her.

At the end of her second year, the business struggled because their anchor store, Lowes Foods, left town and the building where the restaurant was located in Jefferson was not easily visible from U.S. 221.

It was agreed upon to relocate the restaurant and start over after securing a new location in Jefferson. They rented a unit in the building, which was formerly The Junction. The space was a fixer-upper and Howell and her father completed extensive remodeling.

“We worked our tails off and got it up, got it going,” she says.  “And it was doing fantastic, I mean the first year was just great. I’d never seen anything like it.”

She went from six employees at the West Jefferson location to 14 full-time employees in Jefferson.

Unfortunately, the restaurant took a hit when a landslide occurred and impacted all of the businesses that occupied the building. Due to an inability to open the restaurant resulting from damage caused by the landslide and legal issues, Kristin said she lost almost $28,000 in the two months they were closed.

“People were donating money; we took all of that money and we paid for employees’ groceries, we paid their electric bill, we paid their house payment,” she says. “We were trying our best to keep our head above water while fighting the landlord (and) trying to get some help.”

The restaurant permanently closed in August 2018 after Howell exhausted all of her financial options and the town requested the business purchase a water/grease trap system and re-pave the parking lot, which amounted to $20,000, she says.

She describes it as the hardest time in her life as she endured another major setback.

Kristin returned to Shatley Springs Restaurant to run the kitchen after they agreed to take all of her staff. She said that she and her staff helped the restaurant get the best health inspection score they had in 15 years.

“Everybody was just so impressed, we came in there and we ‘cleaned house,’” she says. “We cleaned it up, the food was coming out good, the waitresses were looking good, the kitchen was on time. Everything was spot on. It just wasn’t what I wanted to do; it wasn’t the kind of food I wanted to do.”

Local brewer Greg Hershner enlisted her assistance to open New River Brewing Taproom and Eatery in downtown West Jefferson. Along with her father, she completed contracting work, which included painting, sanding and assembling tables and chairs. She also designed the floor plans for the kitchen as well as hired and trained staff.

“I put my heart and soul into it,” she says. “Starting up businesses and creating a restaurant is just something I’m good at. I’d done it so many times at that point that I was really good at it and I was on fire.”

After a conflict with the brewery, she said she was left without a job. She went through a rough patch as she was almost 40 and unemployed while her academically gifted daughter was applying to boarding schools. During this time, she heard about a friend of hers that owned a food truck in Charleston, S.C. She called and asked if she could come down there to work with him on the truck.

“So I went down to Charleston and I went and worked on it,” she said. “And I fell in love with that truck.”

She began exploring options for available loans to help her purchase a truck. After a great deal of searching, she took out a loan from a private lender at a balloon rate.

“I took a leap for it and I bought the food truck. And it’s the best decision that I’ve ever made,” she says. “Whitley and I had struggled for so long; it had been a long, hard process to get to where we are right now.”

One thing Kristin loves about having the food truck is the freedom it allows. She and her daughter are able to spend more time together. When she is home from school, Whitley works with her mom on the food truck. Kristin also has the ability to take a weekend off here and there to visit her at her boarding school in Virginia.

“From the age of 7 to 13, I was working 60-80 hours a week every week,” she said. “The only time we saw each other was if she was sitting on a barstool, or helping wash dishes or hanging out. We never saw each other unless I was at work.”

Kristin hopes to operate her food truck for at least the next decade or for as long as she is physically able to operate it.

A typical workday for Kristin’s Hook’d on Smoke consists of a great deal of preparation before rolling toward its destination. Kristin wakes up around 6:45 a.m. to drive her personal vehicle to Glendale Springs where her truck is stored. She then drives the truck to Mountain Aire Seafood, which is her commissary. She spends about two hours making sauces and completing all necessary prep work.

She describes it as the most physically challenging job she’s had because all of the items need to be loaded into the coolers each day to ensure they are fresh. She added that there is an extensive setup process. The burgers are hand pattied each morning the truck runs. All of the sauces, food and materials are then secured inside of the truck to prevent items from turning over as the truck travels 60 mph down the road to its destination.

While Kristin can travel for events or catering, she does not travel to Wilkes County due to safety concerns.

She describes it as challenging being a woman in any restaurant business, especially in the food truck industry. Other local food trucks, which she said are all run by men, will help each other out when they are short-staffed or experience maintenance issues such as a flat tire.

She said what sets her apart from other food trucks in the area is the extensive menu Kristin’s Hook’d on Smoke has to offer. It is a full restaurant on wheels, with a quick turnaround time on orders.

Her favorite part about her job is interacting with people and feeding off of their energy. She says they make her feel like she matters.

“The customers are really what does it for me,” she says.

She has many repeat customers; some live locally and come to eat each week, others live out of town and travel once or twice a month and bring along first-timers.

For them, eating with Kristin has an air of familiarity as she knows the community well. She values her connection with each of her customers and focuses on the details of who they are and what they like to eat. She says locals also believe in her because they have seen her rise and fall several times and they have witnessed her resilience.

Three things she values while operating her business are good times, good people and good experiences.

To keep up with the latest news about Kristin’s Hook’d on Smoke, follow the food truck on Facebook or Instagram. For information about its location, menu or catering options, visit the website at www.kristins-hookd-on-smoke.com.