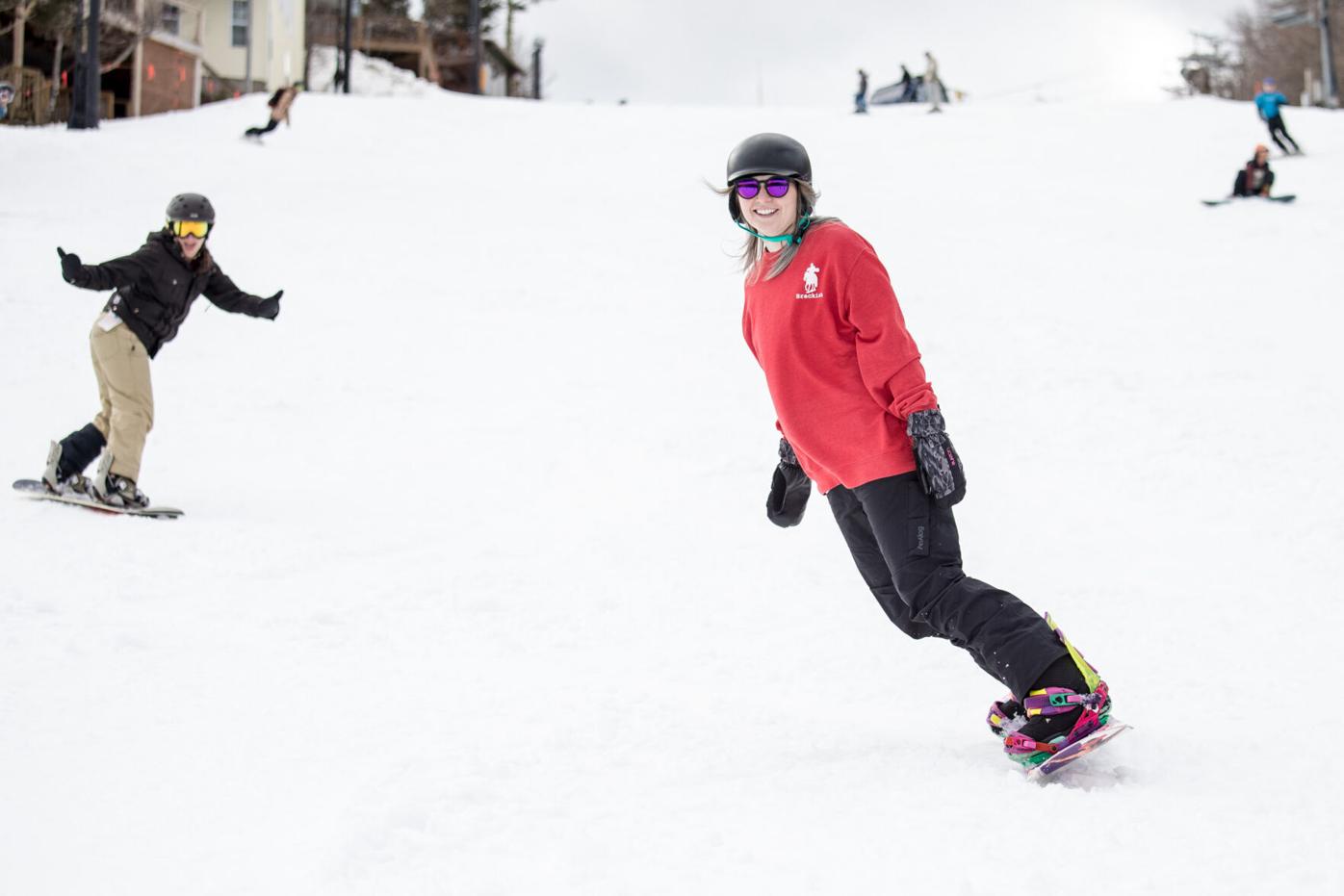 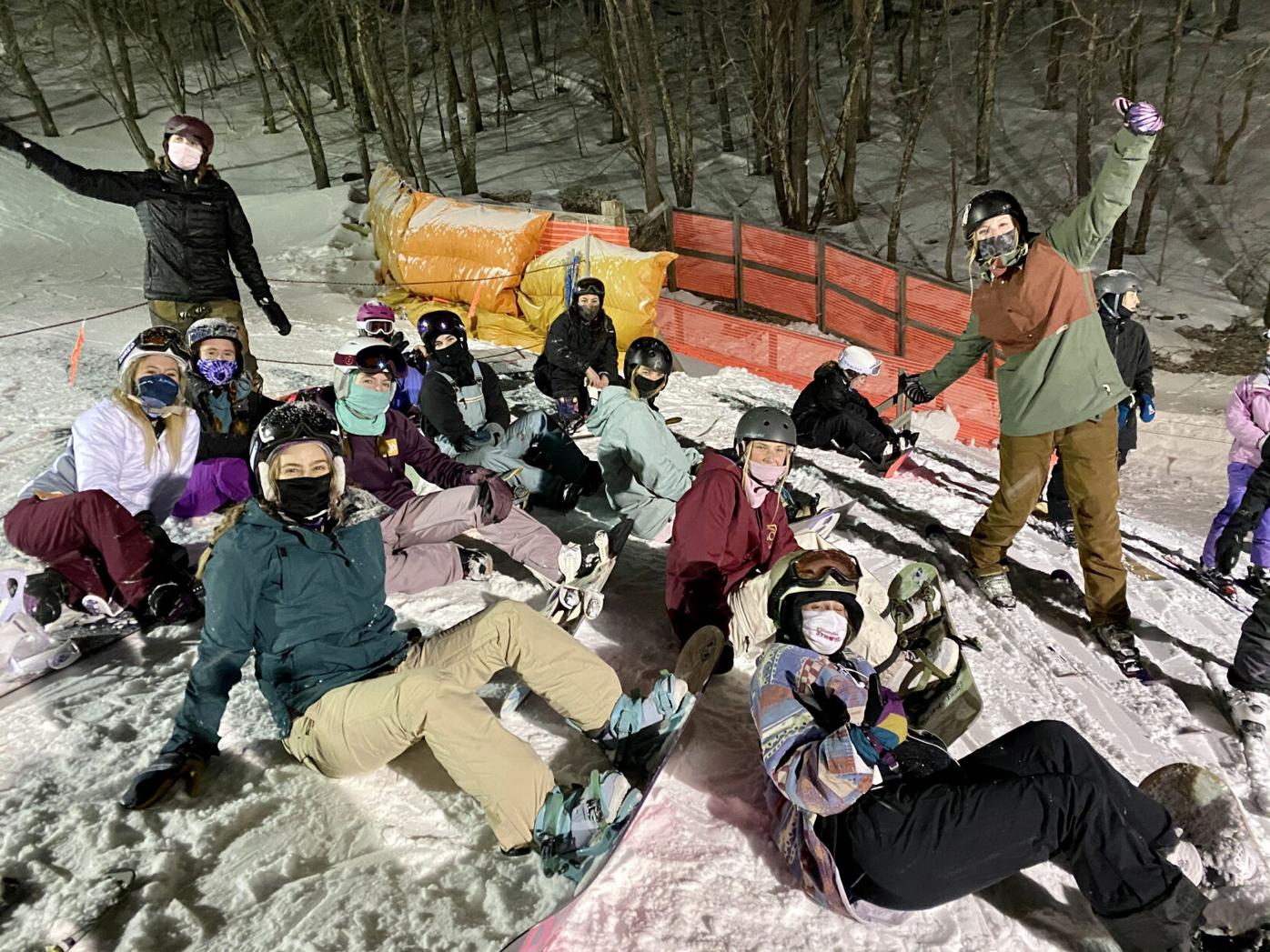 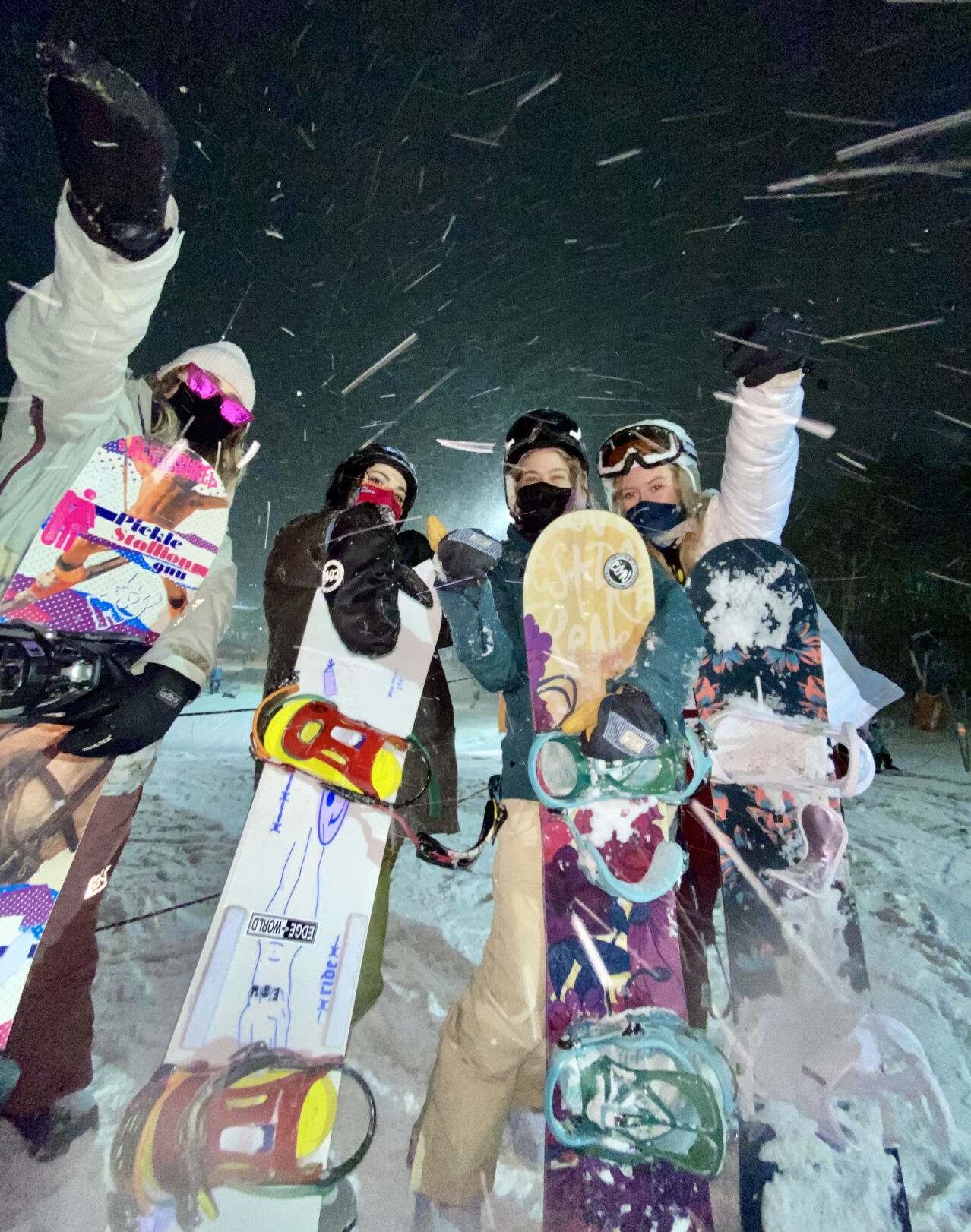 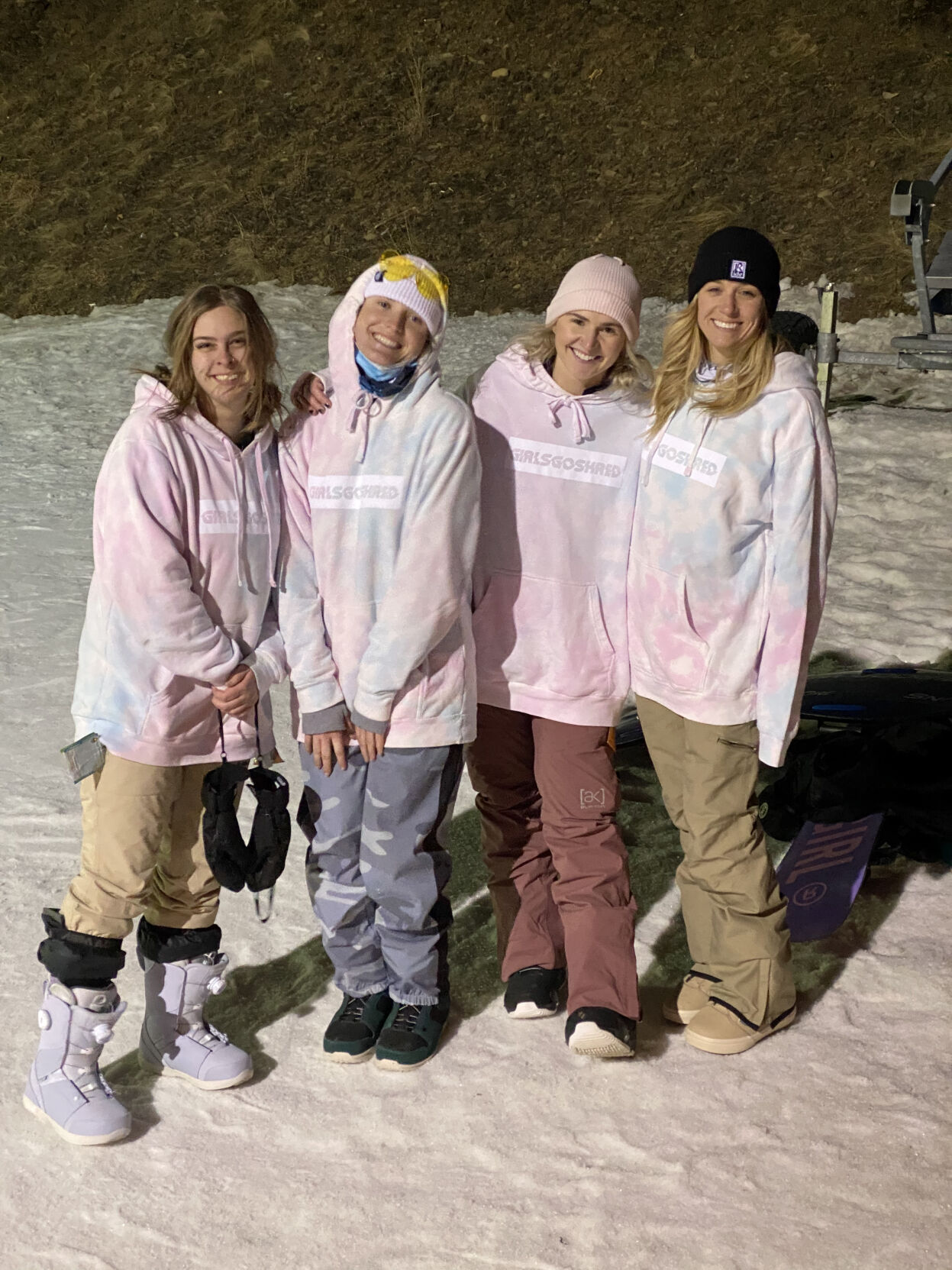 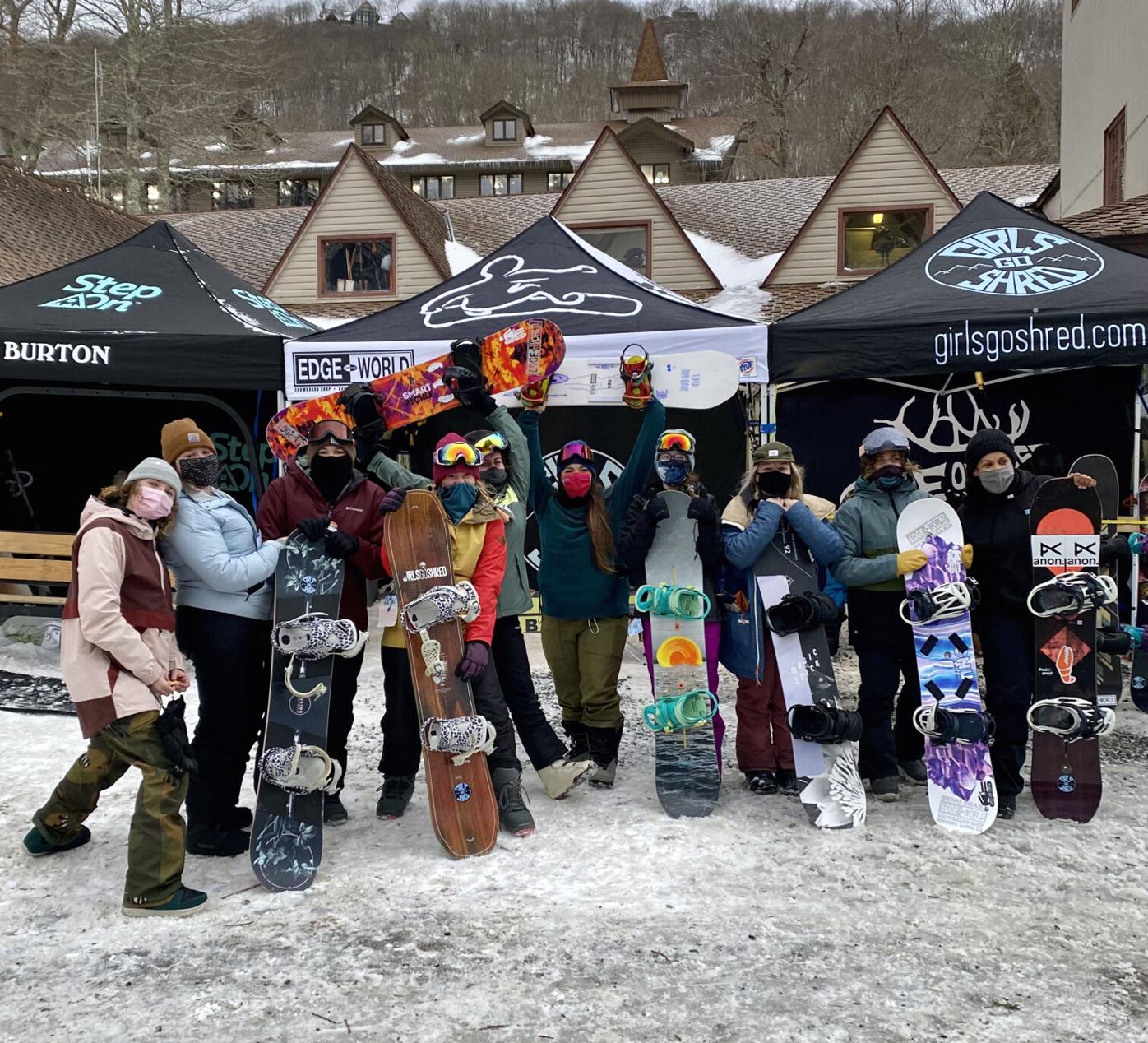 Girls Go Shred meets up at Beech Mountain Ski Resort during a ladies night event at the mountain. 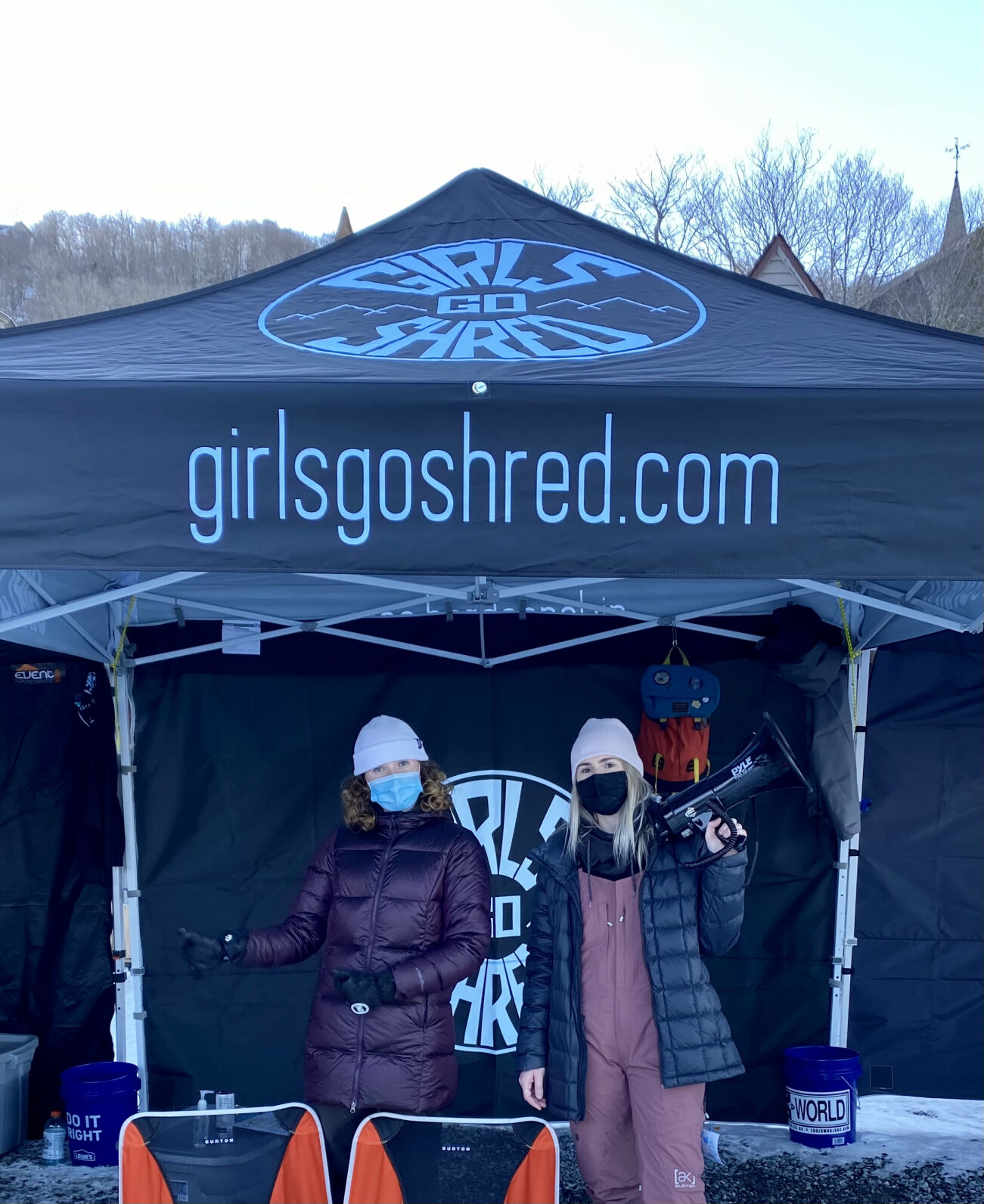 Renner and Kristen represent Girls Go Shred at an event. 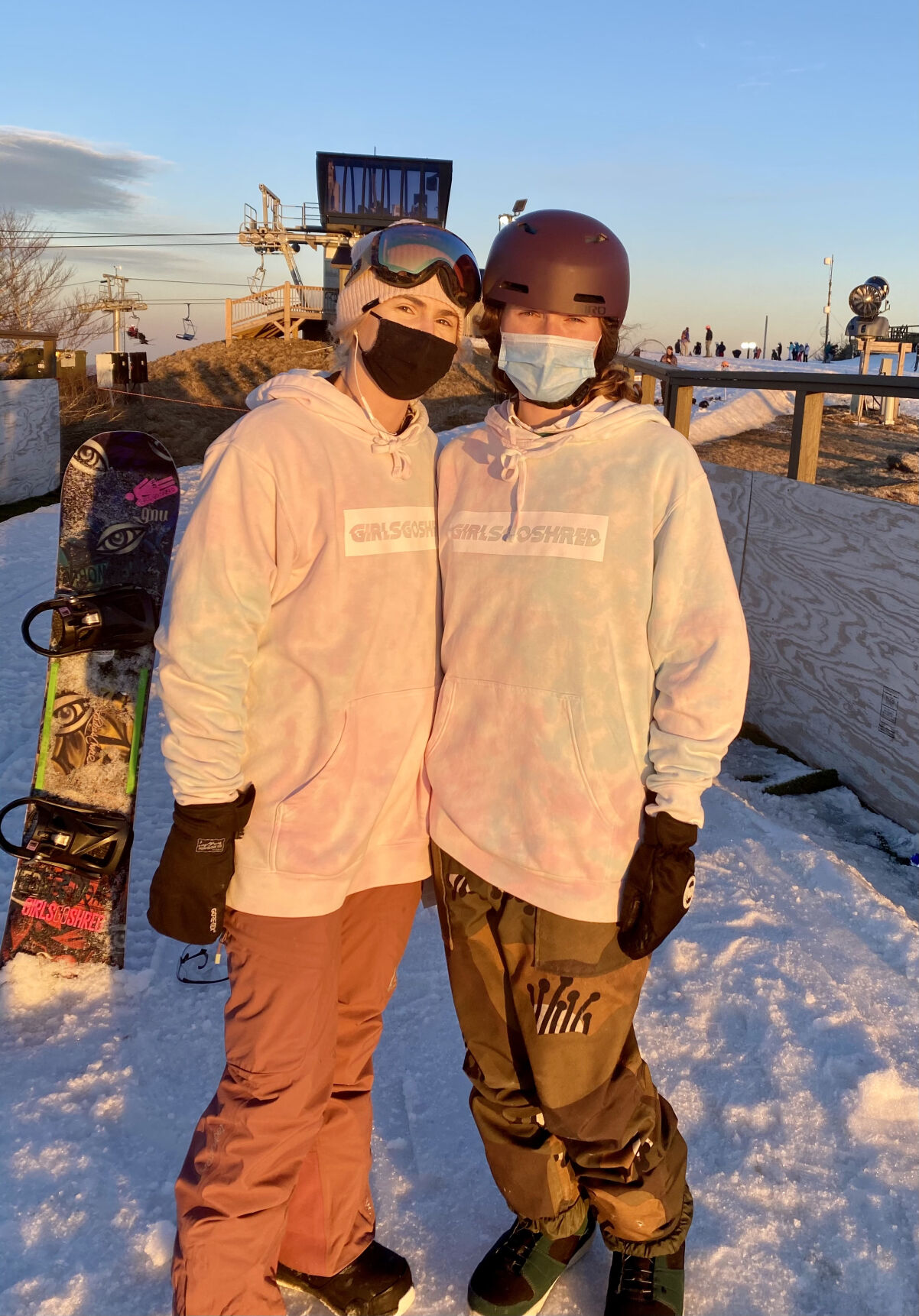 Kristen Gray and Renner Murphy have been snowboarding together since Renner met Kristen at EDGE of the WORLD. 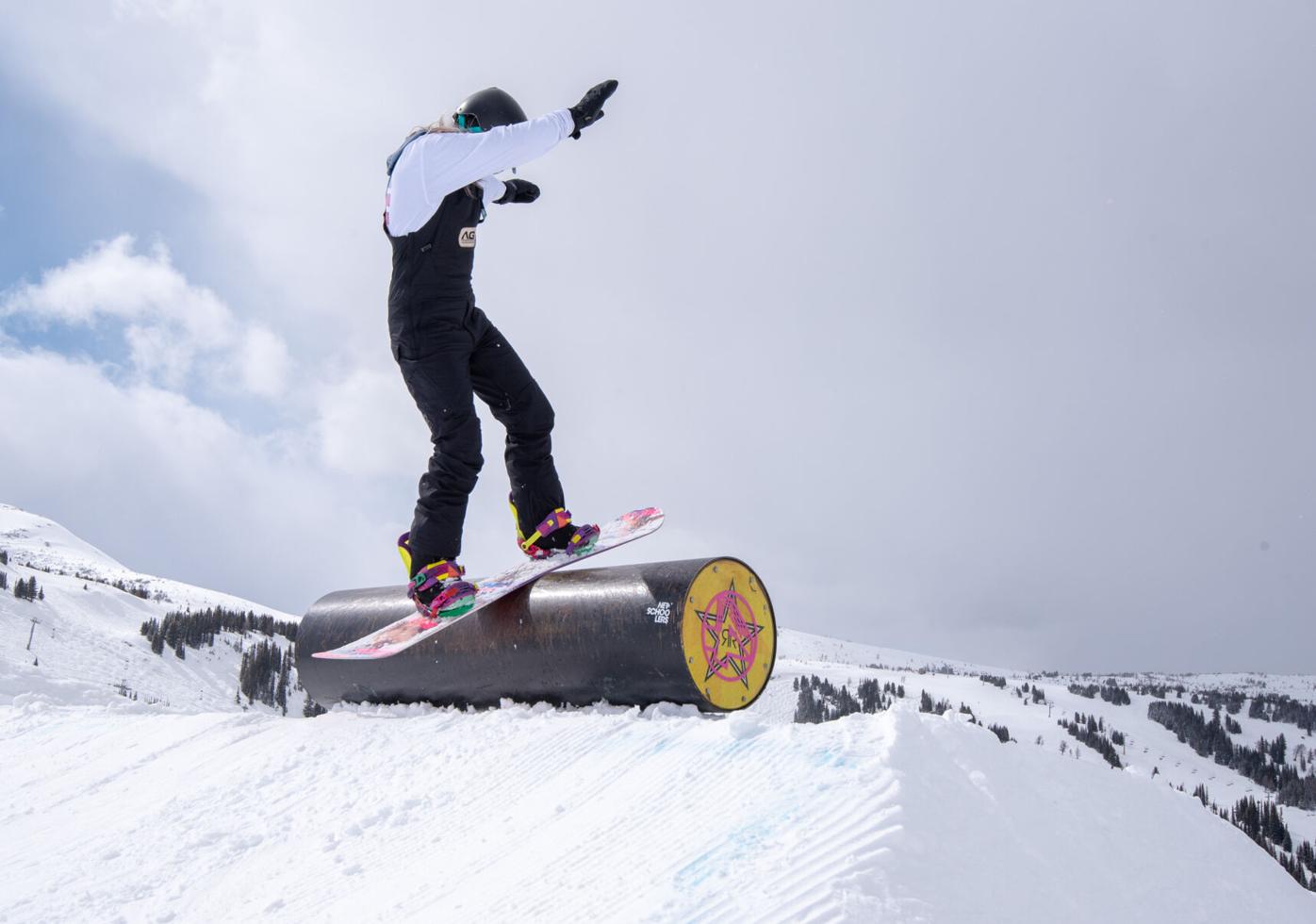 Girls Go Shred meets up at Beech Mountain Ski Resort during a ladies night event at the mountain.

Renner and Kristen represent Girls Go Shred at an event.

Kristen Gray and Renner Murphy have been snowboarding together since Renner met Kristen at EDGE of the WORLD.

High on the mountain of Appalachian Ski, a group of women scream as a little girl completes her first feature in a terrain park. The little girl, Lucy, came out specifically for the group — dubbed Girls Go Shred — as did all the other female snowboarders encouraging Lucy through her first trick.

The founder of Girls Go Shred, Kristen Gray, started skiing when she was 2 years old. Her dad — a ski patroller at her local mountain in Ithaca, New York — would drop her off at ski school every weekend, where she first got equated with winter sports. Then, when she was around 10, her older brother began snowboarding; wanting to follow in her brother’s footsteps, Kristen began to learn as well. At the age of 14, she switched completely to snowboarding and “never looked back.”

Eight years ago, after graduating from Ithaca College, Kristen traveled to the High Country to work at EDGE of the WORLD, a snowboarding shop in Banner Elk. At the time, the only person she knew was her brother, who graduated from Appalachian State University and was living in Boone. Immersing herself in the High Country’s winter sports culture, Kristen frequented the mountains, hoping to build a community of fellow snowboarders like the small group she had at home.

“When I moved here, it was so rooted in the culture,” Kristen says. “That’s what you did to make friends. Whether you skied or snowboarded your whole life or just started, it was how you made friends in the area.”

However, Kristen found herself mostly surrounded by men at the shop and on the slopes. Wondering where the other female snowboarders were and thinking that they were probably out there, Kristen wanted a space to bring other women together on the mountain.

“Brand new, only knew my brother in town, and I was working with a bunch of guys,” Kristen says. “And so, I would always go snowboarding, and I’d have to go with the guys. I just kinda of got sick of it, and I was like, ‘There must be girls out there.’”

Coming up with the idea on a snow lift with her brother, Jeff Johnson, in 2015, Jeff suggested having an event for women snowboarders and posting it on Facebook. Taking his advice and partnering with EDGE of the WORLD, Kristen planned a ladies night meetup at Sugar Mountain. More than 120 people signed up for the event.

“It was just like, ‘There they are,’” Kristen says.

Although not that many people showed up, Kristen says it gave her a sense of how many people were interested in a community of women snowboarders. On the night of the event, she went out to the mountain, posted a photo of what she was wearing, and said, “Come find me.”

“There are probably people that I probably haven’t seen since then, but just the fact that everyone knew it was there, knew it was a thing and everybody was kind of in the same boat was very cool,” Kristen says.

After that, she kept hosting events similar to the first one — meet ups at the mountain. For the second season, Kristen had the group’s first snow meet up at EDGE of the WORLD but continued to meet up on the slopes as well.

When it came to coming up with a name later on, Kristen said she didn’t want anyone to be confused about what the group was. The group was given the title Girls Go Shred.

“I just wanted something that was this is what it is,” Kristen says. “It’s girls going to ride. Bottom line.”

Now, the group has conducted on-snow demos, sponsored camps and had park nights at Appalachian Ski Mtn, where the group builds customized parks just for Girls Go Shred and fences it off to everyone else.

“It’s like spiraled but in the best way,” Kristen says. “Honestly, looking back, it’s kind of like a blur on how I got here.”

Kristen says from there, through her connections and community support, she’s been able to build opportunities for the group. Since starting Girls Go Shred, she says she’s gotten an overwhelming amount of support from the community and other women in the group.

Renner Murphy, who became involved in Girls Go Shred from working at EDGE of the WORLD and meeting Kristen, also grew up skiing and then switched to snowboarding following after her brother.

Renner grew up around Boone, and after finally getting the hang of snowboarding, visited every weekend in high school to snowboard. When she enrolled at Appalachian State, she joined the snowboarding team and began working at the shop.

“I feel like everybody has hopefully one thing that gets them really amped,” Renner says.  “Like I love mountain biking, skateboarding, just those really high adventure activities I really enjoy. When I get to do them with my friends and share the stoke essentially, it’s just a very special feeling, and I think that’s what attracts people to snowboarding.”

Renner says she joined Girls Go Shred for the support of other women and has since assisted Kristen with the group, whether helping get equipment up to the mountains, greeting people at events or helping run raffles.

“Having women supporting you is so uplifting and so special. I think it just creates an environment where everyone can flourish...no matter what your ability is,” Renner says. “It’s nice to feel like you’re in a very welcoming environment and a very safe environment.”

Girls Go Shred participates in ladies night every Thursday at Beech Mountain and has frequent park nights at Appalachian Ski Mtn. This season, Girls Go Shred has eight events planned. Renner says the group sometimes has 50 to 70 women come out for events, but the group is never the same each time.

It was at one of the ladies nights at App Ski that Natalia Tapia, a member of Girls Go Shred, got to cheer on Lucy as she hit her first box trick. Natalia, originally from Charlotte, got into snowboarding by taking it as a PE credit through Appalachian State.

“The winters in the High Country can be super bleak, so I think something to look forward to in the winter was huge just for making it through those dark months,” Natalia says.

After hearing about Girls Go Shred’s demo nights, Natalia joined the group for their events and began working at EDGE of the WORLD when she learned about the shop. Natalia says she loved the community she’s gained through the group.

“The park is especially scary for a woman snowboarder, and it’s been so fun getting all of the girls in the park at one time and everybody hyping each other up on ladies nights,” Natalia says.

However, the group isn’t closed to one set group of people, and Kristen says anyone, whether a beginner like Lucy or experienced like Natalia, is welcome to come to events and be a part of the group.

“The whole premise of Girls Go Shred is just creating a supportive environment where women feel safe and feel heard and feel encouraged, whether that’s on the slopes or not,” Kristen says. “Snowboarding just happened to fall into what I was already doing. And that’s all I ever wanted it to be. I just wanted it to be a supportive environment for women, and it’s really resonated.”

In the future, Kristen hopes to connect Girls Go Shred with the other communities of women all across the country who snowboard. She hopes to continue spreading the message of an inclusive, supporting and welcoming environment for women who enjoy the sport.

“Honestly, I say it cause it’s funny, but it’s also true. Girls Go Shred started because I didn’t have any friends,” Kristen says. “But after starting it, I realized that that was true for so many girls.”