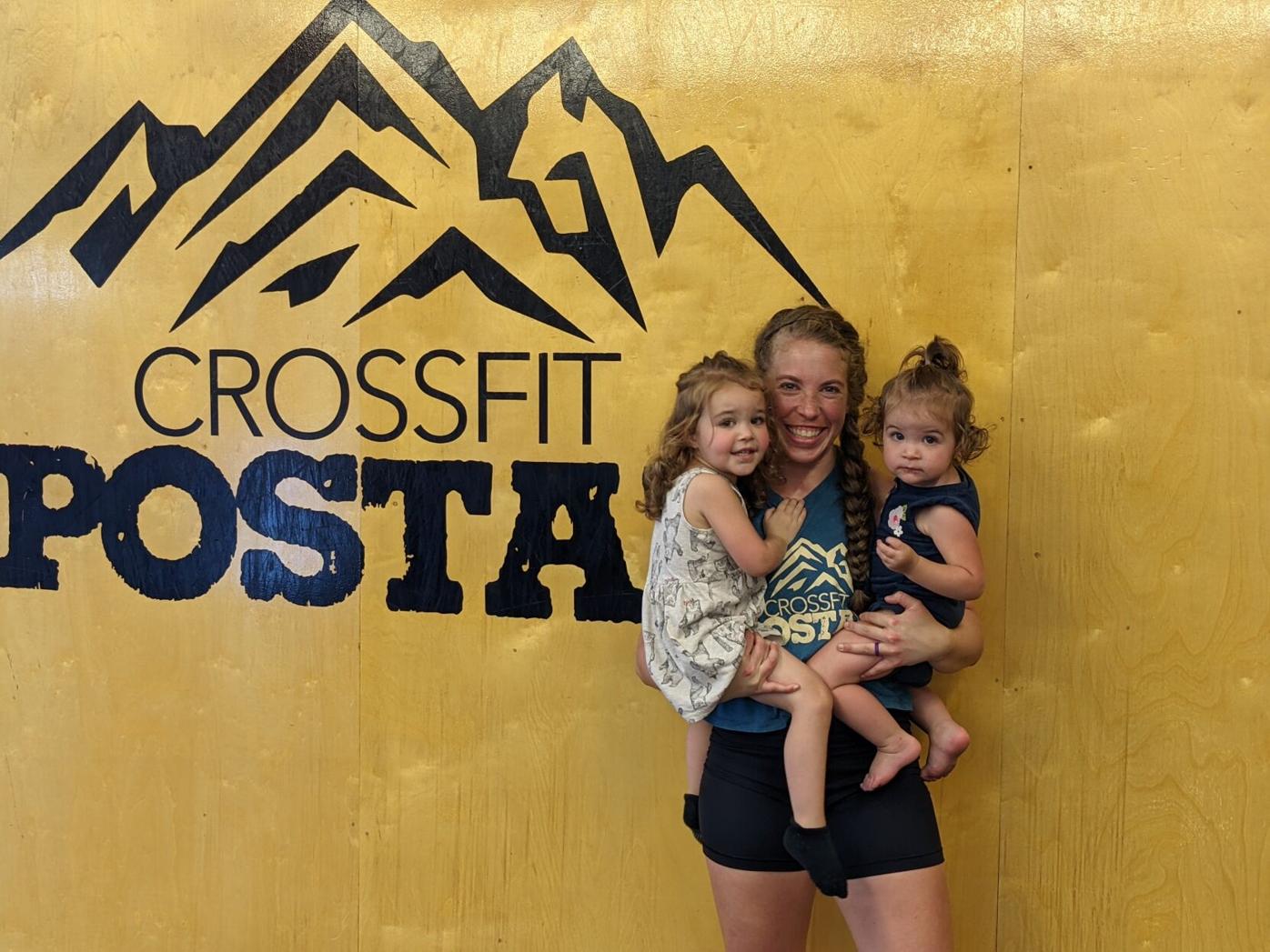 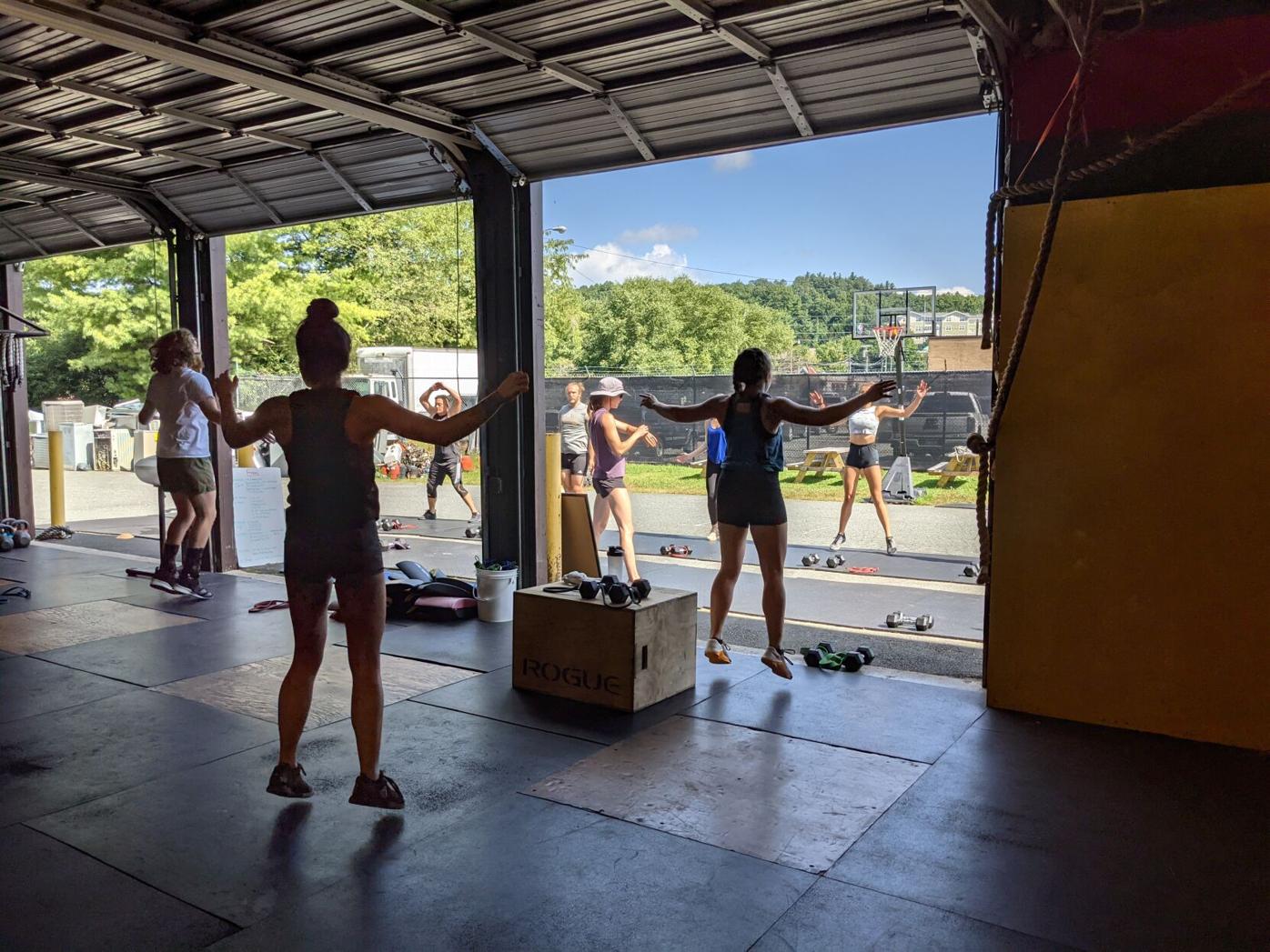 While class participants finish up some jumping jacks, Coach Beth Sibley times them with her watch. 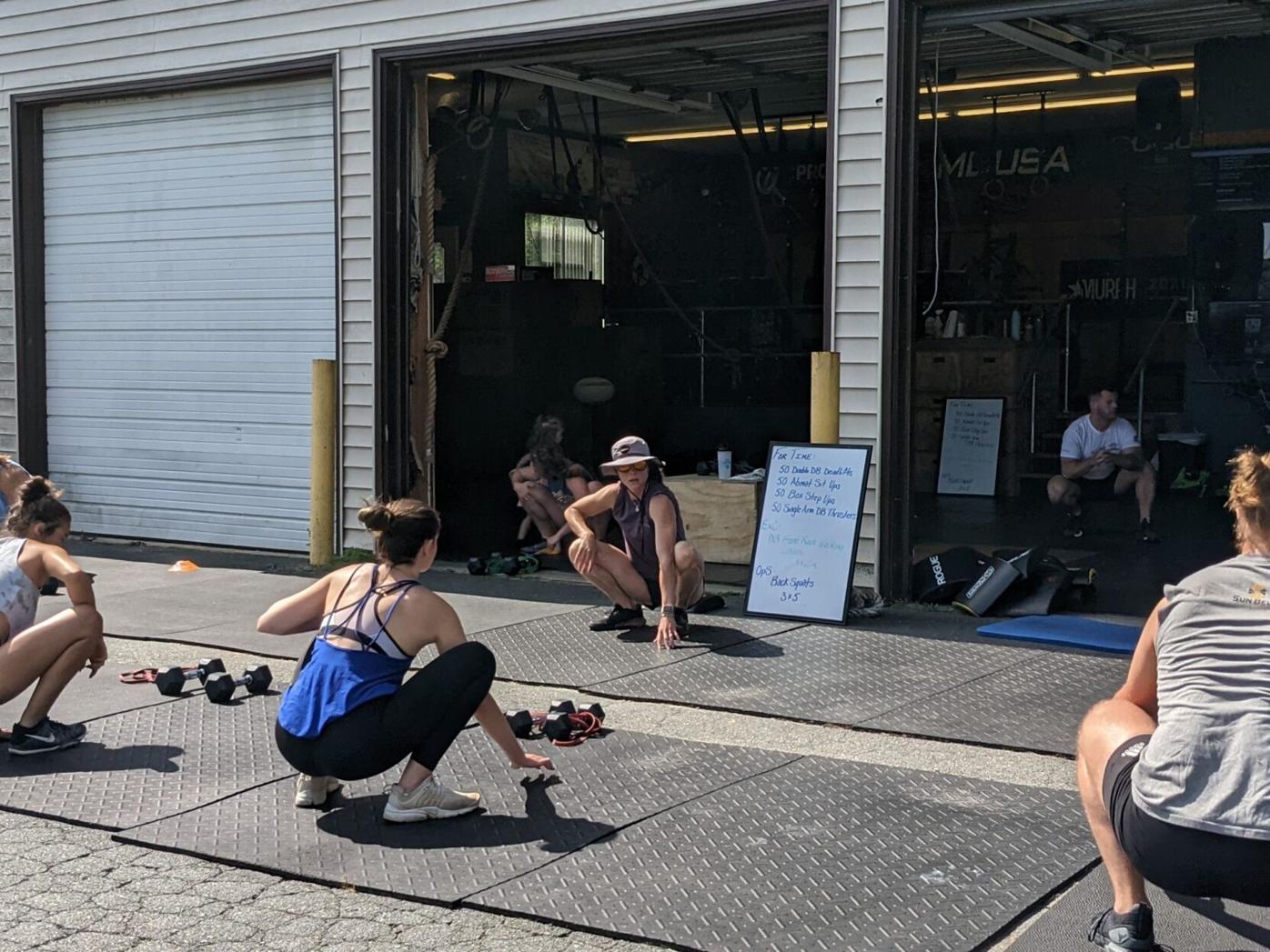 As a workout is beginning, coach Beth Sibley gives a quick instruction before warm-ups. 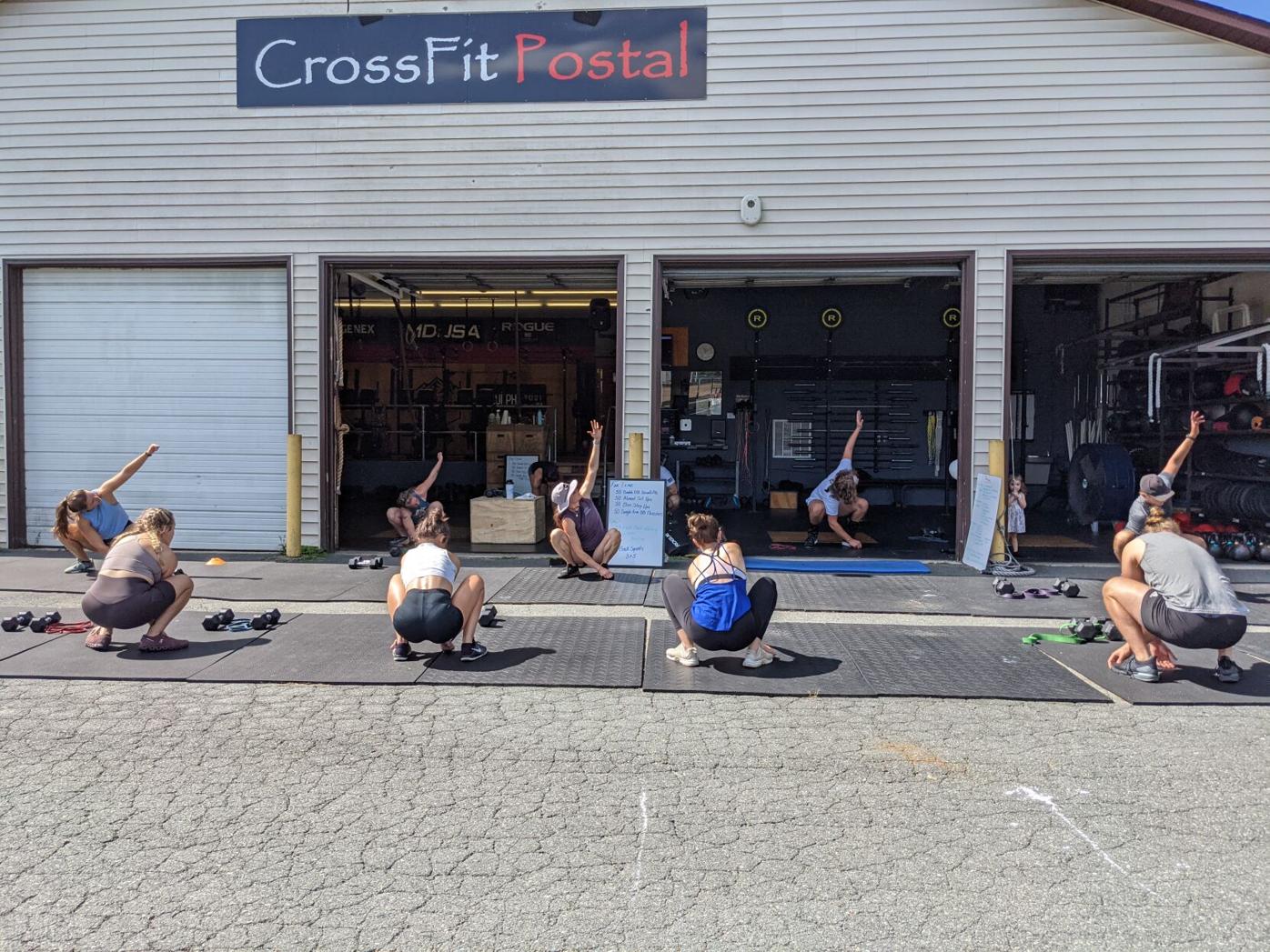 While class participants finish up some jumping jacks, Coach Beth Sibley times them with her watch.

As a workout is beginning, coach Beth Sibley gives a quick instruction before warm-ups.

Tucked next to Publix and behind the post office on Blowing Rock Road in Boone, CrossFit Postal is a gym with pull-up bars and racks lining the walls, black mats covering the wide-open floor space and athletes joking with each other as they arrive for their workout. Air and light enter the building through the two large open garage doors.

On their way out the door, a few athletes ask coach Beth Sibley about some post-workout drinks in the gym’s fridge, and they stop to talk for a few minutes. She has been coaching CrossFit since 2014 after CrossFit Postal’s owner encouraged her to give leading a try.

“People accomplish stuff in CrossFit that they never thought they would,” Beth says. “Like a pull up, or just being able to squat a heavy-for-them weight. And so, being a part of that is really exciting and really rewarding.”

Founded in 2000, CrossFit is an exercise class for people of all fitness levels that includes similar movements from everyday life, according to its website. Its workouts are constantly varied, prescribing a different workout of the day that CrossFit athletes refer to as the WOD — pronounced “wad.” CrossFit Postal offers four classes: CrossFit fundamentals, CrossFit, aerobic capacity and CrossFit for kids. They also have an open gym every weekday and a community workout on Sunday afternoons.

Beth’s husband originally started participating in CrossFit in 2010 and wanted her to accompany him, but she held off because she didn’t want to work out in front of other people. He stuck with CrossFit and continued encouraging her to try it.

“Now I don't want to work out by myself,” Beth says. “I think the community and the relationships that you build with the other members is what's really what I really like about CrossFit. It makes it different than most other fitness programs.”

For many people, one of CrossFit’s draws is that it advertises itself as “being for everyone.” Its moves are designed to be adaptable based on the athlete’s fitness level and physical ability.  Before the pandemic, CrossFit Postal would teach an additional class for people with disabilities, and CrossFit’s annual competition CrossFit Games specifically includes the “adaptive” category.

Coach Janine Harris agrees with Beth about the appeal of the community that CrossFit has around it, and coaching allows her to help others “understand, know, love and believe” as well. Janine had grown up active, playing basketball and adding running to her regimen in college. Her husband suggested participating in CrossFit based on trying it in the past, and she agreed.

“I didn't really know what it was, but I was down for it,” Janine said. “Once I started there was no going back. I fell in love with it.”

She’d considered coaching before becoming pregnant with her first child, but initially was unsure. However, after beginning coaching in 2019, she’d even bring her baby while she’d lead class. Janine said baby seats, strollers, playpens and the like aren’t uncommon at CrossFit Postal — part of the community aspect of CrossFit involves looking out for the children, too.

“Even during my pregnancy, seeing how even more how in CrossFit, everything can be modified, anyone can do it at any stage of their life, really pushed me over the edge to encourage others to do whatever they can to come in,” Janine said. “And I want my girls to do the same thing and to see, to be here, to watch me do CrossFit.”

Some of Beth’s favorite exercises include front squats, rope climbs and dumbbell snatches; Janine enjoys power cleans, double unders and especially wall balls, which she says “do a lot of work in one movement,” including arms, legs and cardio. However, CrossFit newcomers shouldn’t be intimidated by the workouts, Janine and Beth were both quick to emphasize.

“You don’t have to get in shape to do CrossFit,” Beth said. “That’s the point. ”

Before a class begins, coaches design the warm-up, which includes a general warm-up to raise the heart rate and move the body through its range of motion followed by a more specific warm-up for the class movement. Most warm-ups are outside if possible due to COVID-19. All classes do the workout of the day, and a warm-up may consist of breaking down the workout of the day’s main movement, Beth said.

Doing the movement slowly to warm up allows the coach to watch the class, ensure everyone is moving correctly and safely, and offer feedback. Additionally, it also allows athletes to practice the movement before “three, two, one, go.” The coach may ask other coaches how athletes have done that day, as Janine does, and adjust as they see fit. She also praised the warm-ups that fellow coach Ben Sibley writes.

“Everyone is sufficiently warm when it's time for the workout. And I think that that's something that's really special about Postal,” Janine said. “It's really important, but I think a lot of people, a lot of athletes, I get the feeling they're like ‘ugh.’ Sometimes it feels like a mini workout before, but it's good! Your body is ready to do it.”

After warming up, intensity builds “like doing a mini version of the workout of the day,” Beth said. Finally, everyone begins the workout at the same time. Athletes might end together, such as with a timed workout repeating a motion, or they may end separately based on their own timing, such as with a workout with a prescribed number of repetitions or instructions to complete “as fast as possible.”

Janine and Beth also both suggested keeping active the day after a hard workout as well. Active recovery, keeping muscles warm and moving at a low intensity — such as stretching — can help, as well as being sure to eat and drink water after a workout. Protein shakes and bars are OK if having a meal isn’t feasible.

But, the takeaway is that CrossFit is designed for newcomers to be able to adapt the workouts to their fitness level so they don’t overexert themselves. New athletes and experienced CrossFit athletes alike can partake in the same classes because they’re all scaled to the individual’s needs; anyone is encouraged to give CrossFit a shot.

“We were all new,” Beth said. “We’ve all been nervous, we’re all still here and you’re likely not the only new person — people are always trying it.”