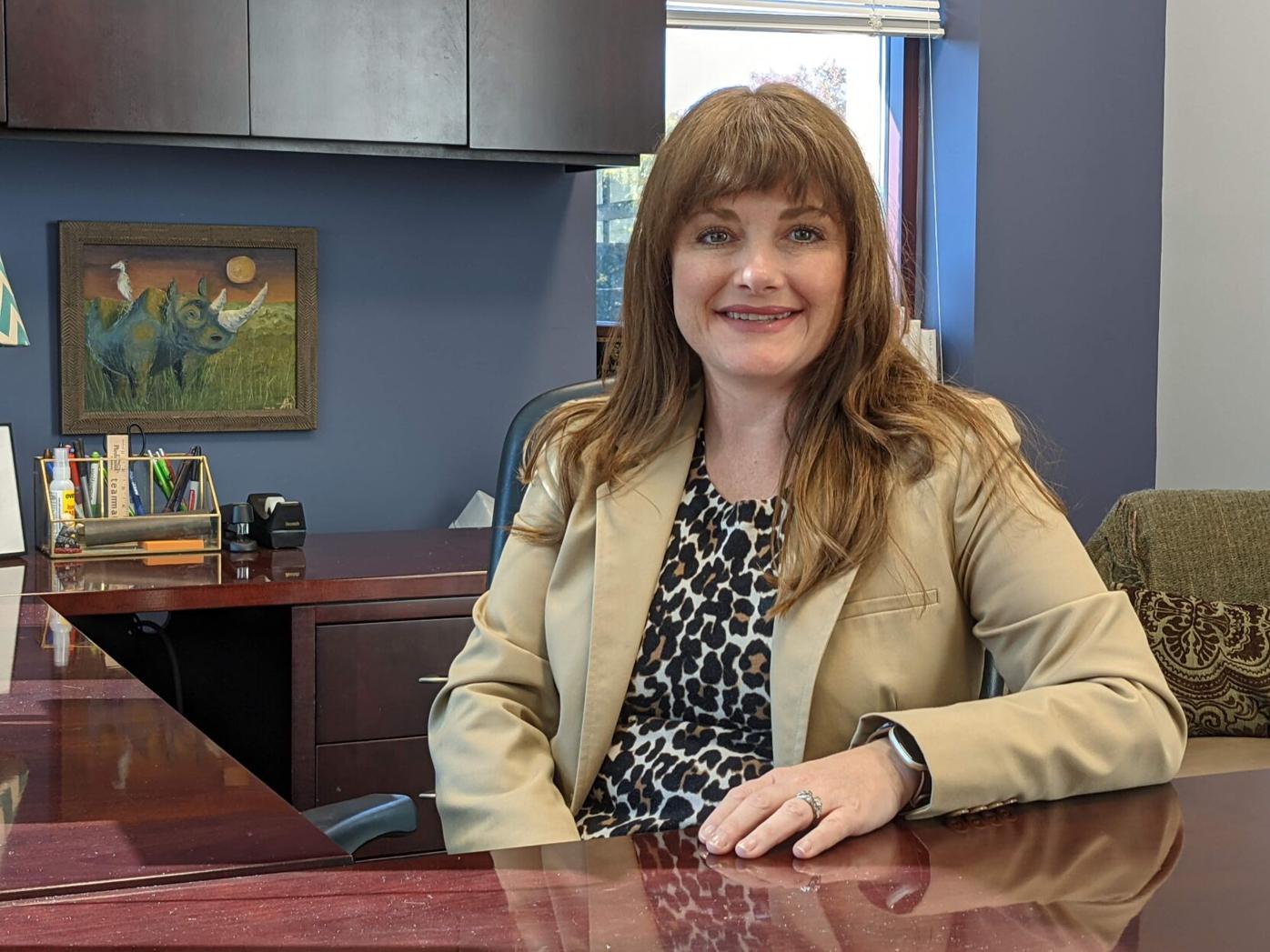 Amy Odom serves as the Associate Director of Business Career Services and Women of Walker adviser. 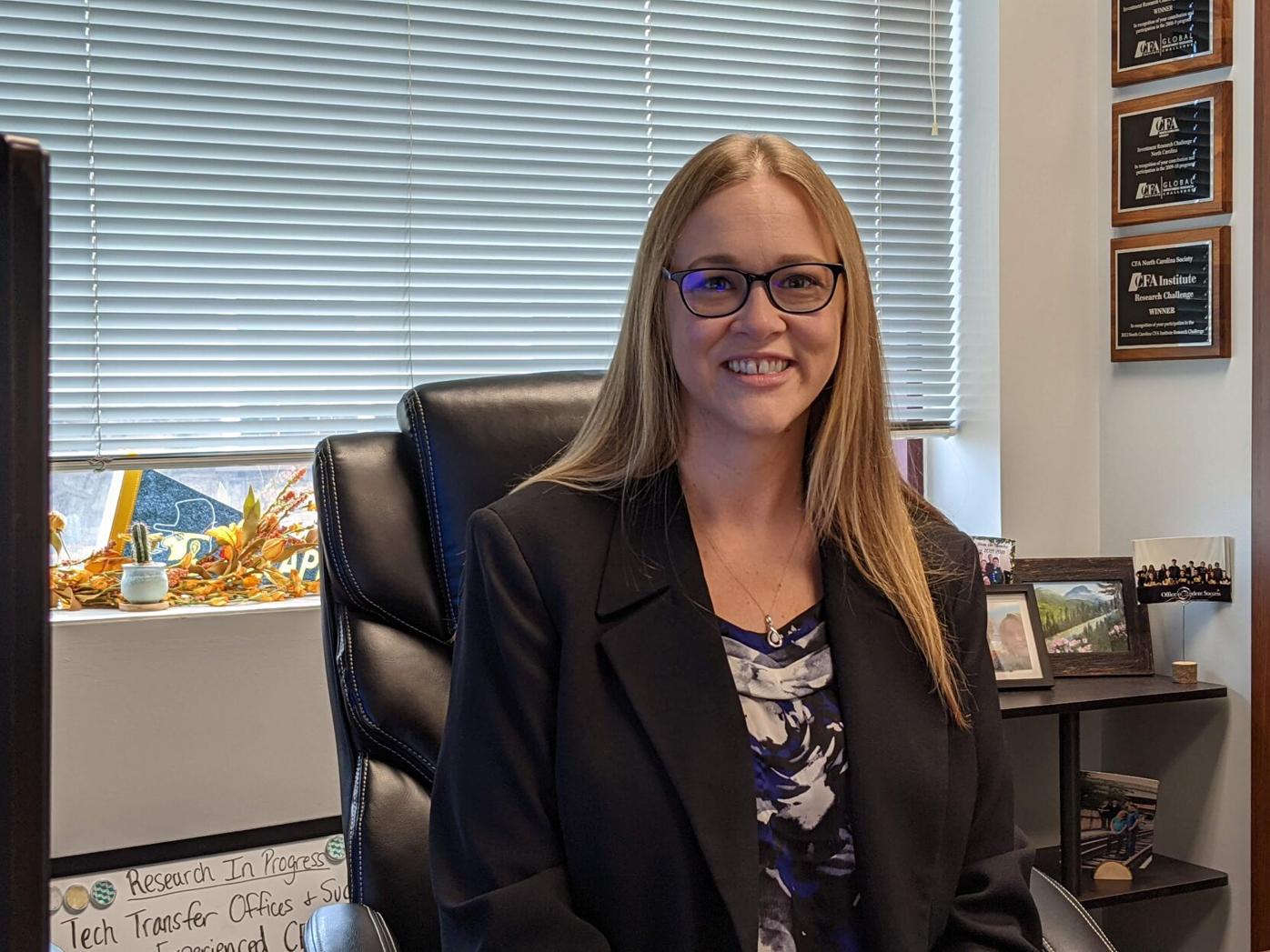 Brandy Hadley is an assistant professor of finance at Appalachian State University. 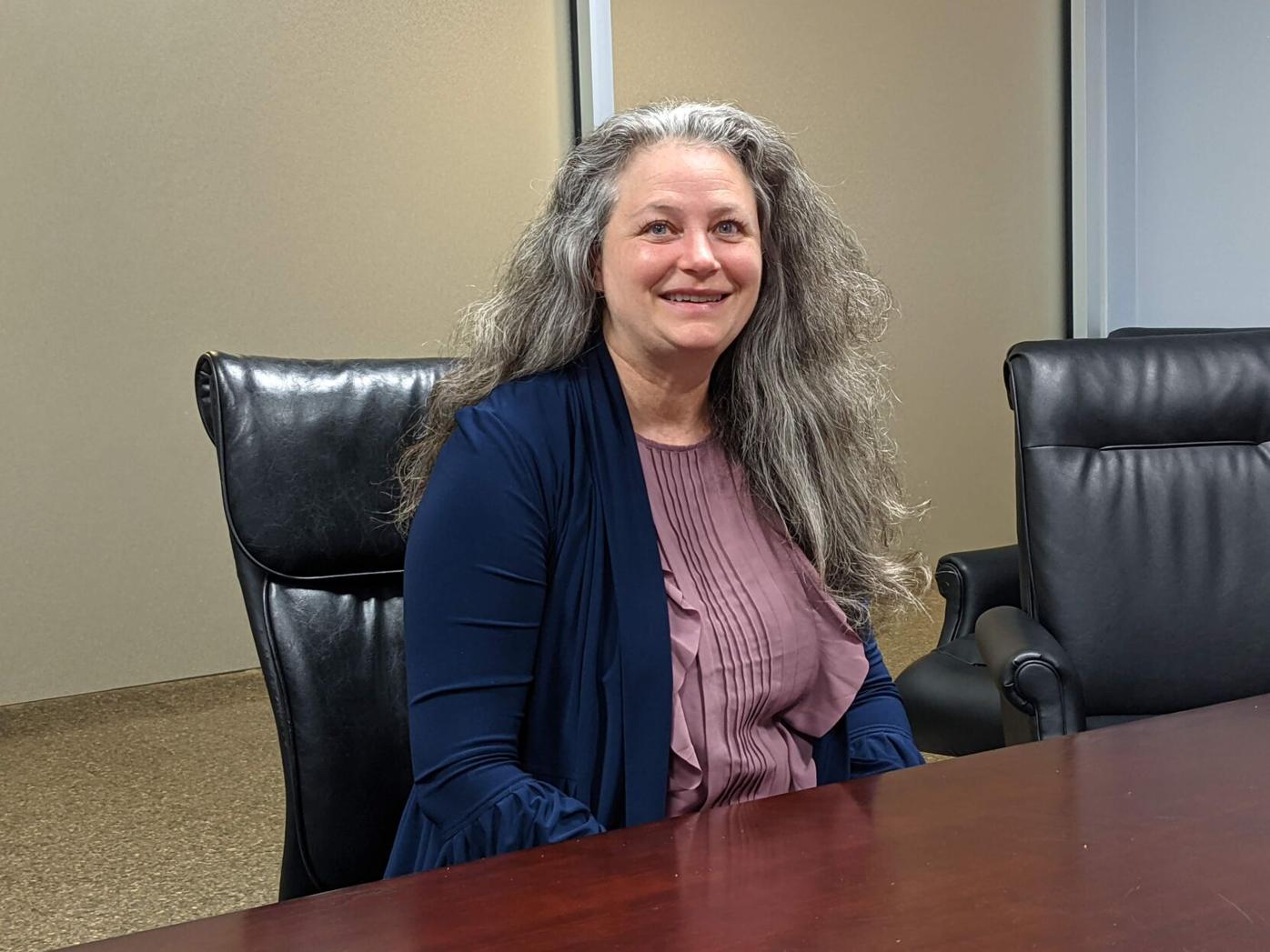 Lori Medders is a professor of insurance at Appalachian State University. 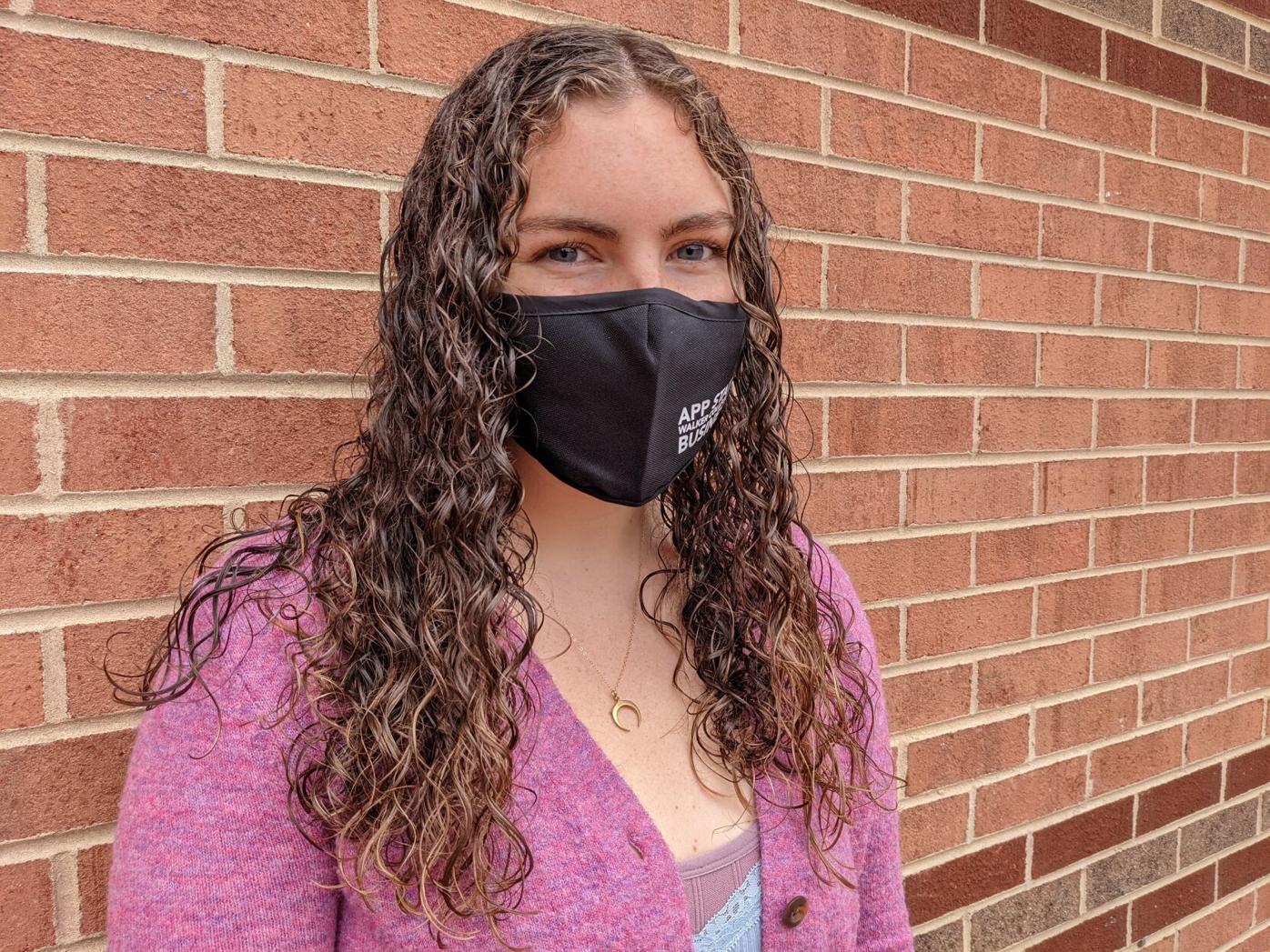 Madison Browne is a senior at Appalachian State University double majoring in risk management and insurance with finance and banking.

Amy Odom serves as the Associate Director of Business Career Services and Women of Walker adviser.

Brandy Hadley is an assistant professor of finance at Appalachian State University.

Lori Medders is a professor of insurance at Appalachian State University.

Madison Browne is a senior at Appalachian State University double majoring in risk management and insurance with finance and banking.

While the trend is starting to improve, the Department of Finance, Banking and Insurance in the Walker College of Business at Appalachian State University has typically seen a lower enrollment of women in the program to that of men.

Lori Medders, professor of insurance, and Brandy Hadley, assistant professor of finance, agreed that it’s difficult to count the exact number of women in their programs because the numbers can fluctuate significantly from semester to semester. Despite this, Lori estimates about 40 women are in the Risk Management and Insurance program out of 180 total students; Brandy estimates out of over 420 Finance and Banking majors, just under a hundred are women.

Senior Madison Browne, who double majors in risk management and insurance with finance and banking with a minor in criminal justice, estimates there may be four to seven women in a class with 30 people. She describes her relationship with the other women in her classes as a community.

“You kind of come in the first day and you see the few women, and you know them because it’s the same women that have been in your classes,” Madison says. “You kind of are like ‘oh, these are my friends.’”

To foster that sense of community between women, the Walker College of Business hosts two programs: Women of Walker and the Women in Financial Services initiative. Women of Walker is a spring-semester program hosting workshops, panel discussions and site visits, and is only for business majors; it aims to support women already in the major through professional development and networking. The Women in Financial Services initiative is active all year and also hosts workshops and site visits, and women outside of the business majors are welcomed at their events as well. It seeks to grow the presence of women in the business program as well as increasing financial literacy and knowledge among women in other departments.

“We include that ‘intended’ part so we can accept freshmen and sophomores, because typically they have not declared their major at that point, officially, through the College of Business,” Amy says.

There’s no GPA requirement, but students have to commit to attending all of the two-hour meetings twice per month during the spring semester as well as the travel opportunities to visit potential employers and receive site tours from alumni. Amy also leverages her Watauga Women in Leadership board position to bring speakers in and overlap programming when it’s beneficial. The program also culminates in an overnight trip to Charlotte, complete with a networking social in the evening and a site visit in the morning before the students return to Boone the next day.

“What I learned in the beginning of being at App State is that I really love and appreciate long-term relationship development opportunities with students,” Amy says. “Most students will identify how much support that they need in their kind of career journey with Women of Walker. I get to hold on to them and see that long-term development every time.”

When Amy was hired in 2014, the Women of Walker program hadn’t taken off the ground yet after Dawn Medlin, a computer information systems professor, founded it. Amy began the pilot program with nine students that year, and since then the group has grown to more than 200 enrolled students and alumnae. Alumnae have landed jobs at Saks Fifth Avenue, Bloomberg, Lowes Companies, IBM, Amazon and numerous accounting firms, as well as graduate school placements. Amy keeps in touch with alumnae, inviting them back to speak at events and host site visits at their own employers so members can “see where they landed.”

“It’s the most important thing for me to instill in them how crucial it is for them to understand the value of building a network, and that even as a female, we need the support of the people around us, both men and women,” Amy says.

Differing from Women of Walker, the Women in Financial Services initiative isn’t a club in the traditional sense, with a members roster and application process. It began after the then-department chair was concerned about the number of women in the business programs and opportunities available to them; he approached Lori, incoming professor of insurance, and Brandy, incoming assistant professor of finance. They jointly chair the initiative.

“We both came to the faculty at App in fall 2017, and we met over email during the summer of 2017 to start work on this initiative before we even got here,” Lori says. “(The department chair) showed the numbers to us and we said ‘huh, we agree.’”

Similar to that of the Women of Walker, the Women in Financial Services initiative also hosts workshops and speakers, but these events are open to women all across the university. Because it’s not a club, they can invite women from all educational departments who are interested in gaining financial literacy and knowledge. Brandy estimates their programming reaches between 100 and 300 women across the university in a given year, including a successful workshop with an executive coach that emphasized learning one’s strengths and leaning into them, regardless of intended field.

The initiative is working: Brandy said the number of women majoring in a business field has grown by 22.7% from fall 2016 to spring 2021, while in the same time period enrollment in the department has grown overall by 3.9%. Lori’s research group App RISE — Risk Initiative for Student Engagement — is mainly women who were selected by their peers. The board for the risk management organization, Gamma Iota Sigma, is primarily women. Brandy also works with the Bowden Investment Group, a student investment fund, and a third of students involved are women.

“We have more women who were selected by their peers into that group than ever in history,” Lori said. “It’s very unusual, at any university, that four of 12 are women.”

Women in Financial Services also takes students on trips for networking and other programs based on funding from the Walker College of Business. Madison went on a trip to New York with the initiative group in fall 2019; while there, Madison met with an alum who connected her with the internship she completed during summer 2021, leading to her securing a job at the same firm after she graduates. Madison emphasizes finding that sense of community for up-and-coming women in the business programs.

“We all didn’t just fall in place, in business. We came from different backgrounds,” she says. “I would just say find people who you can kind of relate to, find people that have those diverse backgrounds.”

“The opportunities are tremendous,” Lori says. “I’m not saying it’s totally gone, but the glass ceiling in the industry is evaporating as we talk about it, and just building that trust in young women that opportunities are there. It’s real. It’s sustainable.”